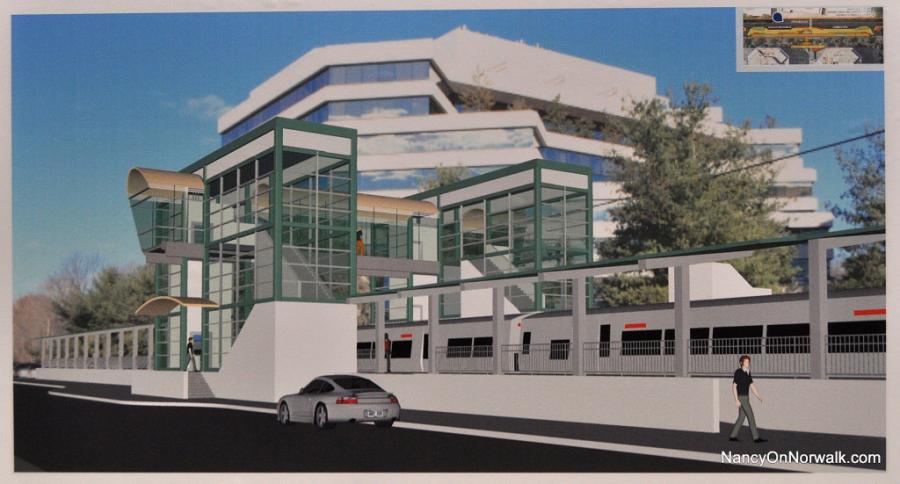 A 2015 rendering of the proposed train station at Merritt 7. (NancyOnNorwalk photo)

Connecticut's governor was given an update on the major renovations of Norwalk's Merritt 7 train station by the state's Department of Transportation (CTDOT) on Sept. 10, a project set to be completed in fall 2022.

Gov. Ned Lamont learned that the station, a stop on the Danbury branch of the Metro-North Railroad, will be equipped with a high-level, 500-ft.-long platform, 105 parking spaces and heated platforms to prevent snow and ice accumulation, according to CTDOT Public Transportation Chief Rich Andreski.

In addition, it will have tower structures on the east and west side of the station with elevators and stairs as well as a pedestrian overpass across the tracks, a passenger information display system, PA and security system, canopy and bike shelter, according to the transportation agency.

The goal of the reconstructed Merritt 7 station, along with expediting travel to New York, is to create a more commuter-friendly environment, where residents can live, work and shop in the same area without the need for car travel, Lamont said.

Designs of the new station's platforms aim to improve accessibility for customers and reduce boarding time by providing access to all the cars on the longest trains traveling up and down the line, CTDOT spokesperson Kevin Nursick told the Hour. The existing platform only allows a few doors to open for boarding.

When finished, though, the new Merritt 7 will serve 28 trains daily, eight of which are direct to New York's Grand Central Station, Andreski noted. Parking at the Norwalk station will increase from 88 to 105 spots, some of which will be in a newly built and paved lot just across the street from the whistle stop, located along Glover Avenue close to the Norwalk-Wilton border.

The Merritt 7 is the final stop on the Danbury Branch before it connects with the New Haven Line in south Norwalk.

Connecticut first authorized funding for the project in 2017, when $21 million was approved to borrow for the upgrades to the Merritt 7 stop and design work for a proposed station servicing Orange.

Monies from the Connecticut State Bond Commission put in motion the two projects that had sat idle on the books for several years.

Finally, construction work on the Merritt 7 station began in September 2020.

Better Connection to Be Built to Adjacent Developments

The improved station's walkway bridge will also lead to the Merritt 7 offices, the largest corporate park in Fairfield County, according to the compound's website.

Merritt 7 Corporate is home to IBM, Xerox, MassMutual and Frontier Communications, among other companies. Hearst Connecticut Media Group (which includes the Norwalk Hour) also has office space in the complex.

"They want to give it a village effect and you can get everything you need," Norwalk Mayor Harry Rilling said of the area's new condominium and apartment complexes being developed. "There are all kinds of things that can be done here to get things running smoothly and traffic flowing."

The new stairs and overpass will provide access to riders coming from the adjacent development. They currently face a long walk to the station or a car ride.

The Merritt 7 train station currently consists of a small shelter and a narrow parking lot on the north and south sides. It also has the only low-level platform on the Danbury branch.

According to the Hour, the new footbridge and improved train station will open at a time when Norwalk is rapidly growing. The city experienced the seventh-largest population increase in the state during the last decade, and third-largest growth among big cities, according to 2020 census data, with approximately 90,000 residents.