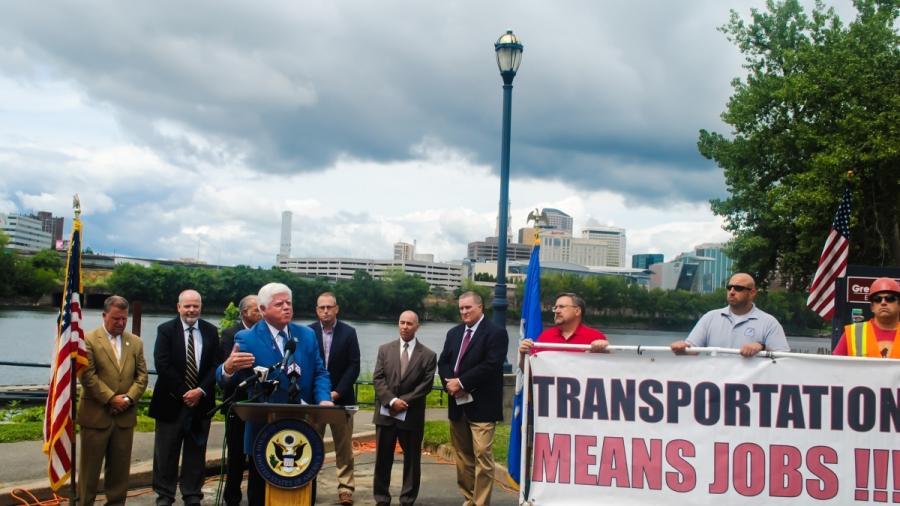 On Aug. 8, Rep. John B. Larson (CT-01) announced the America Wins Act, a $1 trillion proposal to rebuild the nation's crumbling infrastructure and to create millions of jobs for the middle class over the next decade.


On Aug. 8, Rep. John B. Larson (CT-01) announced the America Wins Act, a $1 trillion proposal to rebuild the nation's crumbling infrastructure and to create millions of jobs for the middle class over the next decade.

“At a time when the American people are yearning for solutions, we have an extraordinary opportunity to put the country to work rebuilding our infrastructure,” said Larson. “As a nation, we have spent trillions of dollars overseas while other countries have invested in their infrastructure. Meanwhile, our infrastructure — once the envy of the world — has fallen into a state of disrepair.

“The American Society of Civil Engineers recently gave our infrastructure a grade of 'D+' — that is simply unacceptable. I am introducing the America Wins Act in order to repair our crumbling roads and bridges and to jump start transformative projects that can solve our infrastructure challenges. This is a jobs program for the middle class and it is fully paid for without adding to the national debt. It is time to invest in our infrastructure and invest in America,” said Larson.

“We hear a lot about infrastructure proposals, but the discussion usually stops when it is time to talk about how to pay for it. Congressman Larson's plan doesn't stop short. It actually starts with a long-term dedicated funding source that will provide robust funding for core programs.” said Don Shubert, president of the Connecticut Construction Industries Association.

“We have an opportunity to rebuild our infrastructure and to put America back to work. The time to pass this legislation is now,” said Ted Grabowski, president of CT Laborers, Local 230.

A study by the American Society of Civil Engineers (ASCE) estimates that the U.S. is currently facing a $2 trillion infrastructure funding gap over the next 10 years. ASCE concluded that if we fail to make the necessary investments in our infrastructure, we will lose 2.5 million jobs and $3.9 trillion in GDP by 2025. Another study by Standard & Poor's concluded that every $1.3 billion invested in our infrastructure results in 29,000 construction jobs alone and adds $2 billion to our GDP. Based on these figures, the America Wins Act would create up to 22 million constructions jobs over 10 years.

The America Wins Act would:

• provide a consumer tax rebate to the American people; and

This bill is fully paid without adding to the national debt. The America Wins Act is estimated to raise $1.8 trillion in total over 10 years through an upstream tax on the carbon-content of fossil fuels such as coal, oil, and natural gas. All of the revenue raised will be placed in a trust fund, administered by United States Treasury, in order to be solely used for investing in the nation's infrastructure, providing the American people with a consumer tax rebate, and dedicated funding for carbon-intensive industries such as coal workers.