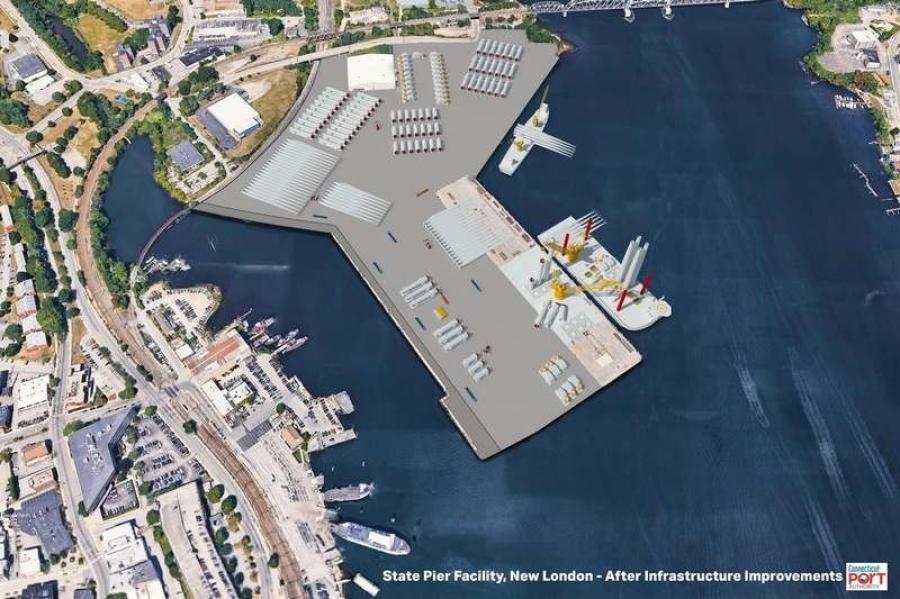 A Connecticut state official involved in planning for the reconstruction project at State Pier in New London said efforts are under way to keep the project on budget.

Kosta Diamantis, deputy secretary of the Office of Policy and Management (OPM), addressed the Connecticut Port Authority (CPA) in January and fielded questions about the possibility of costs escalating for the $157 million project, which is being funded through a partnership by the state and joint venture partners Eversource and Ørsted.

Diamantis said the initial design phase is nearing completion and while estimates are above $157 million, there are sure to be revisions as the process moves forward.

"At the end of the day it's the owners' responsibility, through the various consultants, to sit down with them and taper where this project needs to be for the purposes imagined by the owners," Diamantis explained. "We're still in the estimating phase. There's nothing definitive at this point."

He said upcoming meetings with Kiewit Corp., the construction manager, will better separate what is essential versus what is wanted for the project. The OPM was tasked by Gov. Ned Lamont with financial oversight of the port authority in 2019.

David Kooris, chairman of the CPA's board of directors, reiterated that it is working with Omaha, Neb.-based Kiewit to "hone the scope of the project to bring it in line with costs estimates in earlier iterations of this design."

The original estimate for the project was $93 million but by the time a deal was signed, the cost had risen because of alterations made to the design to better accommodate Cross Sound Ferry's concerns about interference in its waterfront operations. Ørsted and Eversource have committed $77.5 million to the project, and the state and port authority are funding the remainder.

"We are in the midst of an in-depth process to bring the project in line with the funds available," Kooris said. "A lot of people have their sleeves rolled up and are working on it. The idea that there is a new dollar amount is not accurate. There are estimates that continue to be developed."

Kooris said if the project does exceed $157 million, the onus is on the CPA to seek additional funding from the state. If the state refuses, the CPA is likely to go to Eversource and Ørsted to help fill the gap. If they elect not to add additional funds, Kooris said further efforts will be made to revise the scope of the project to get it in line with available funds.

One year ago, the CPA, terminal operator Gateway Terminal, and the joint venture partners finalized a harbor development agreement to redevelop State Pier into a heavy-lift capable port facility and bring hundreds of well-paying jobs to the area. The plans also call for filling in the area between the two existing piers to create additional storage space and will result in three berths.

Ørsted and Eversource will lease the pier from pier operator Gateway for a minimum of 10 years to use the facility for the pre-assembly of wind turbine generators. The joint-venture companies plan to use State Pier to support their planned 704-megawatt offshore wind farm, Revolution Wind and other projects in the planning stages across the northeast.

The projects await approval by the Connecticut Department of Energy and Environmental Protection, and U.S. Army Corps of Engineers.

CPA Executive Director John Henshaw reported in mid-January that cleanup of the site in preparation for construction is expected to get under way by mid-February. He said Kiewit has expressed its desire to be on site by March.

The port authority recently approved a new extension to State Pier tenants, including road salt company DRVN, whose massive pile of salt remains at State Pier. A previous extension had given the company until the end of January to sell the salt or forfeit it to the CPA to make way for upcoming construction; it now has until the end of February.

"It's obviously in everyone's interest to see DRVN successful in selling that salt," Henshaw said.

Commercial fishermen and Skanska, the construction company using the pier as a staging area for work across the river at Electric Boat, also will have additional time.