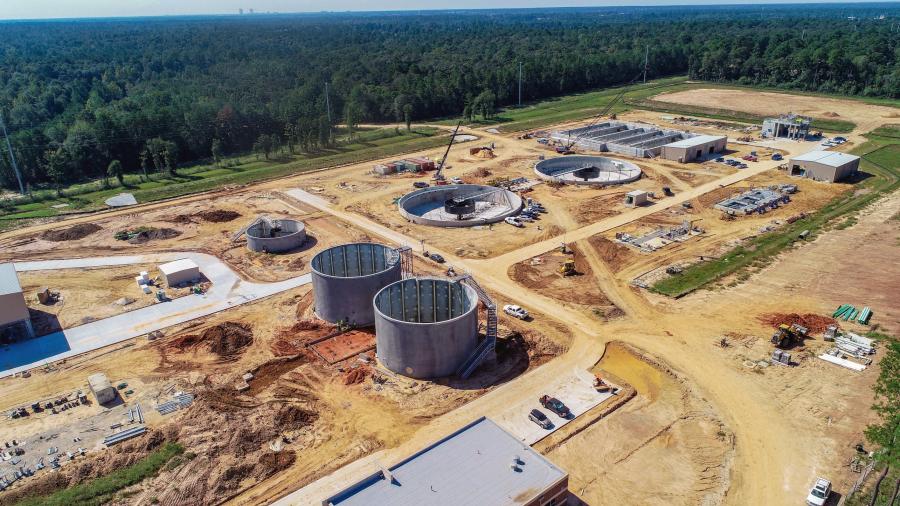 The new plant was designed by Lockwood, Andrews & Newnam (LAN) and constructed by LEM Construction. (Photo courtesy of WWTP)

The plant treats 6 million gal. a day and this is expandable up to approximately 12 mgd, which serves as a testament to the city's rapid growth and growing infrastructure needs. According to five-year estimates from the U.S. Census Bureau, Conroe's population jumped 61 percent from 2013 to 2018.

The city of Conroe provides drinking water from the Jasper aquifer and Catahoula aquifer, as well as surface water from Lake Conroe. Conroe also treats a small portion of wastewater from the city of Willis and the new plant will continue to service Willis as well, according to city officials.

The new plant was designed by Lockwood, Andrews & Newnam (LAN) and constructed by LEM Construction. The Central Wastewater Treatment Plant will serve the city's area east of I-45, while the city's existing plant will serve the western half. The new plant lessens the load on the existing Southwest Regional Wastewater Plant, which is nearing an important capacity benchmark established by the Texas Commission on Environmental Quality.

Conroe's original plant, The Southwest Regional Wastewater Plant, has been operating since the mid-1970s with two prior plant expansions under its belt — both because equipment had reached or exceeded its design operating life.

The new Central Wastewater Treatment Plant uses an influent lift station, which splits the flow between the existing South WWTP and the Central WWTP. The split can be adjusted as needed, but was challenging to design from the existing trunk sanitary sewer between the two plants. 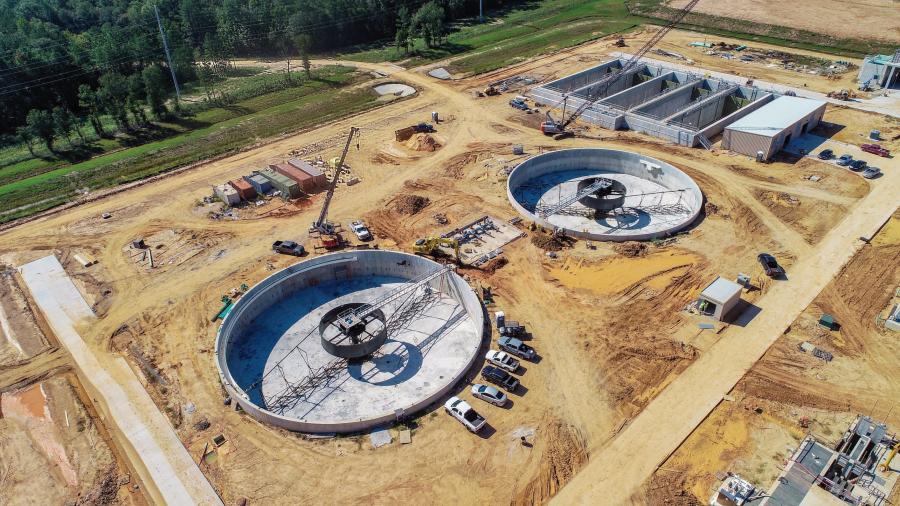 The water is sent to the headworks of the plant, where a screening process occurs. It then passes through the grit removal process. The flow continues to the aeration basins, then the secondary clarifiers, moving through a filtration system, into an ultraviolet disinfection system before the water is discharged from the plant.

To reduce capital cost, a few alterations to the sludge processing design were made. This included deferring the A-Stage of the A/B Process to a later date, altering the digestion design to be aerobic, deferring all biogas equipment, and deferring the need for sludge blending. The city is instead utilizing conventional activated sludge.

"It's pretty much just like the B process, we're going to try to save the carbon diversion set for later in the future when we have the volume to produce the amount of gas that we want to possibly run it," said Greg Hall Jr., superintendent of the Central WWTP.

According to Melissa Mack, LAN senior associate and principal, the plant can use the A/B Process to allow for beneficial anaerobic digestion of the two separate sludges produced in the future.

The treatment could easily be transitioned back to the original design in the event that the plant expands in the future.

The initial construction allows for the future conversion from aerobic digestion to anaerobic digestion, as well as the use of wastewater treatment produced methane gas to power portions of the plant.

While the plant is notable in storage capacity and design flexibility, the project had to be relocated to a new site due to environmental permitting and discharge permitting issues at the 60 percent design phase at its first site. As a result, the new plant site had more than a 20-ft. elevation change from the east side to the west side of the site. This new site is also not considered forested wetlands, according to Hall Jr.

"It's amazing," Hall Jr. said of the success, noting two distinct items. "One, the size of the project, and two, building a brand new wastewater plant in 2020. As of right now, it is the largest project that Conroe has taken on and done and funded."

While the size and scale was a landmark for the city, Mack noted the value of coordinating all stakeholders, and how that coordination added to the success of the treatment plant construction.

"It's had input from council, public works, engineering departments," Mack said. "A lot of coordination. It's been pretty exciting."