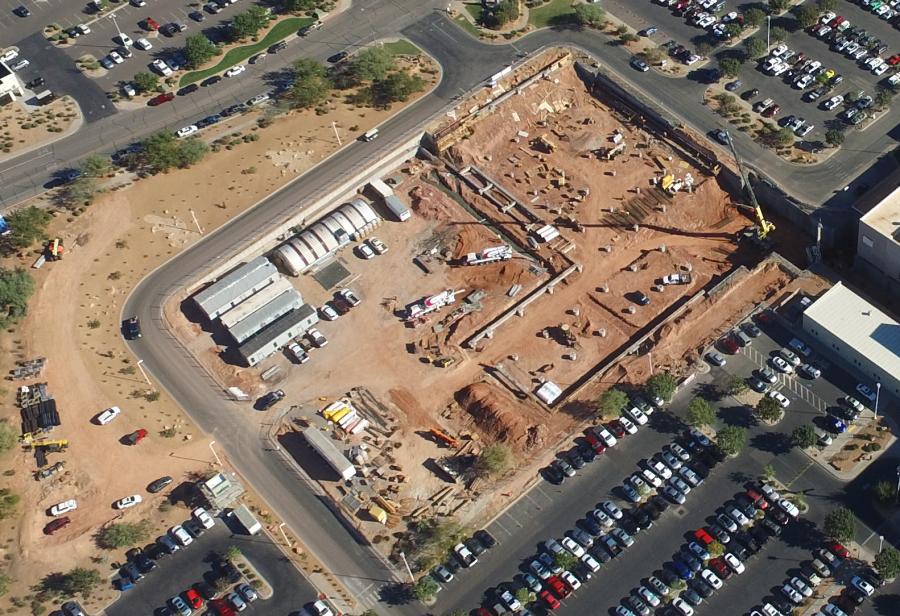 Construction is on schedule for the Dixie Regional Medical Center's $300-million consolidation, a merging of its two campuses and expansion on its River Road campus. When the consolidation is finished in December 2018, St. George-area residents can access healthcare services in one location, along with an offering of new services that include state-of-the-art genomic cancer treatments.

“We've been trying to consolidate [these two campuses] for more than 10 years now,” said Scott Wyckoff, the strategic planning director of Intermountain Healthcare's Southwest Region. “We knew it would take a while because of how expensive it would be to fund it, and the downturn in the economy delayed it.”

A primary driver for the project is the area's expected population growth. “We usually plan between the five-to 10-year window, so this consolidation should provide us with services for the community at least through that time frame,” he added. “There is some shelled space within the project, where we will be able to add in-patient beds or other services as needed. Hopefully, this will take us beyond 10 years, if we're able to manage the utilization efficiently.”

Although the project could be regarded as an expansion, Richard Dunn, project manager said that consolidation best describes the project, because “it's more about getting all our services in one location.” Healthcare services being moved to the campus include women and newborn services, behavior health, neuro-rehabilitation services and clinic services, such as infusion therapy and cancer treatment.

Three years ago, Intermountain Healthcare gave approval to move forward with the planning, programming, and design phases of the project. Over the last year and a half, the team refined the design and brought in Okland Construction, a general contractor and construction company based in Salt Lake City, Utah, whose portfolio includes a number of healthcare facilities.

“Intermountain Healthcare is one of our best clients,” said Zach Lewis, a project manager with Okland Construction. “We've worked with them for years and years on various projects across the state of Utah. We built the initial phase at this campus about 13 years ago, so it just seemed like a natural fit. We were super excited when we were able to get the project.” Another project partner brought on board was San Diego-based HDR, an architectural firm that now employs the lead architect who designed the original campus and the four new buildings.

The site work started in April 2016, and a groundbreaking ceremony was held on June 17. Dunn said that the completion of the steel structures will be finished in January 2017, and the four buildings will come online throughout 2018; diagnostic and treatment expansion will open in April 2018, the south tower in June, and the north tower in August 2018. The 115,000-sq. ft. (10,683 sq m) cancer treatment center will break ground in early 2017 and is scheduled for completion in fall 2018. Looking ahead to the next two years, Wyckoff sees “lots of change, movement and celebration. It will be exciting.”

As Okland's project manager, Lewis' main concern is managing resources throughout this two-year project. “St. George is between Las Vegas and Salt Lake City, so we're trying to draw resources from these cities to complement the project. Our main concern is to manage those resources in a way that fits inside the hospital budget and allows us to finish on time. That's the thinking behind the staggered finishes is that if we finish smaller areas, we can then move those resources to other areas.”

As the steel structures are nearing completion, crews are working on the diagnostic and treatment building's interior and exterior framing, along with overhead mechanical, electrical, and plumbing. Similar work also is under way in the south tower.

“It's a busy site with a lot going on,” Lewis described. Nearly 200 people are on site at any given time, and at the project's peak, he expects around 500. Okland performs its own concrete work, and subcontracts the remaining work.

“For the most part, everything has gone as we've anticipated,” he said of the construction timeline. “We're on or a little ahead of schedule in most every area.”

While the construction is under way, Dunn is developing the transition plan for moving the offsite services, such as inpatient, labor and delivery and other women and newborn services to the new hospital space.

“We have to get our arms around how we're actually going to move those services to the new campus and have everything functioning and in place for that to happen,” he explained.

The new buildings are designed to fit seamlessly with the rest of the campus, although there is one feature that will stand out, Wyckoff said. “One of the things that's really cool is the cancer center. It is designed to represent the red rocks of the area. There's a metal panel structure coming out of the structure, symbolizing the new technology and advancement coming out of the red rocks, for which St. George is known.”

The cancer treatment center will offer traditional cancer treatments, such as medical and radiation oncology, along with precision genomics research and development including research collaboration with Stanford University. One unique design element is having the clinical area directly across from the lab space, enabling patients to see the research that is underway and for the researchers to see the patients. The goal of this design is to inspire hope, Wyckoff said.

Sustainability is another element included in the overall project design. “We typically shoot for LEED Silver Certification when we do our buildings, and we should be within that range,” Wyckoff said. Some of the certification points will be earned through maintaining indoor air quality during construction along with recycling 50 to 75 percent of their construction waste material.

The $300 million needed for the consolidation is being provided through a combination of internal resources and bond funding, along with community support.

“We have a healthy culture of philanthropy here in our community,” said Terri Draper, communications director of Dixie Regional. “The original hospital on River Road was estimated to cost $100 million dollars, but the community stepped up and gave more than a tenth of that. We're so grateful for the community support that we have here. We are just beginning a capital campaign, and we are hopeful the community will again be supportive.”—CEG