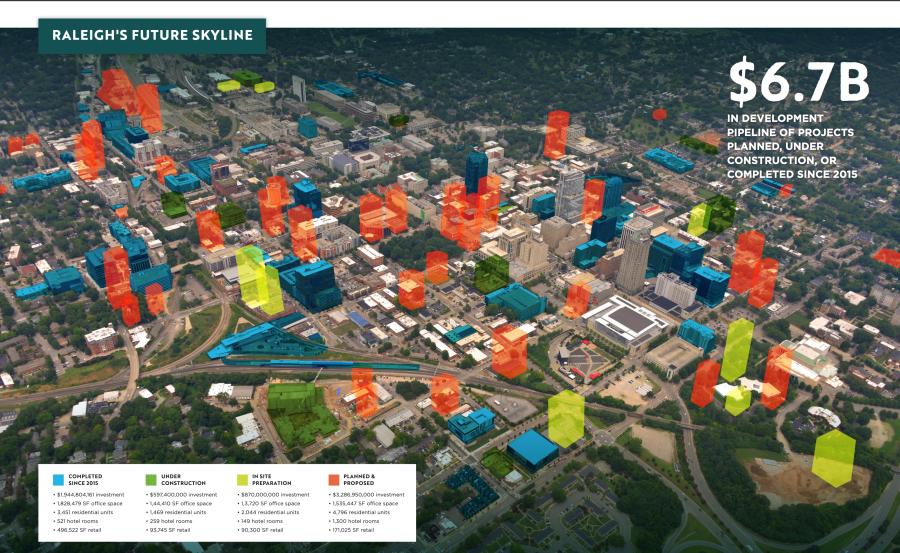 The amount of new construction in downtown Raleigh, N.C., is still substantial with the number of apartments alone scheduled to double despite lingering fallout from the COVID pandemic, the Raleigh News & Observer reported Sept. 1.

There is roughly $3.3 billion worth of planned construction throughout downtown and nearly $1.5 billion in ongoing construction or site preparation, according to the Downtown Raleigh Alliance (DRA) during its annual event Aug. 31 to present its findings.

"The effect and impact of the COVID-19 crisis continues to demand a strong response from our community to help downtown Raleigh, and the work is not done," said Bill King, CEO and president of DRA said at the meeting. "But time and again, this community has shown an ability to support and elevate its center city through bold action and investment. The same energy that revitalized this downtown will position this place to quickly rebound again."

Founded in 1996, DRA serves as the administrator of the Downtown Raleigh Municipal Services District (MSD), which is a defined special assessment area of the capital city in which property owners contribute toward enhanced services.

The agency noted on its website that, "Downtown Raleigh has experienced exceptional growth over the past decade and is poised for more growth coming out of the pandemic. There is currently $6.7 billion in the development pipeline of projects planned, in site preparation, under construction or completed since 2015."

Collaboration Needed to Bring Workers Back to Downtown

Raleigh has nearly 50,000 people working in the downtown area, according to DRA, but many no longer spend most of their work week in those offices.

The pandemic shuttered scores of businesses and offices — a situation that showed many office and government workers that they can do their jobs at home and made it more difficult for employers to get them to come back.

"I'm hoping that more businesses will say to their employees, ‘We need you in here to work,'" said Raleigh Mayor Mary-Ann Baldwin in speaking with the Raleigh news source. "This is where you can be innovative. This is where you can be collaborative. Now, it doesn't have to be every day. But we'd like to see more office workers returning. It's good for the companies and it's good for the people."

DRA noted in its report that nearly 20 companies have announced moves or expansions into the downtown since 2021, making up about 1,500 new jobs.

There is still demand for office space, the alliance explained, with 1.7 million sq. ft. under construction or planned.

In addition, a net 35 new storefront businesses have opened in the area since 2021, according to DRA.

More than 21,000 people live within a mile of Raleigh's downtown core, with that population expected to top 30,000 in five years.

"One of the things we've learned from COVID Is that we've been too dependent on our employee base to enliven downtown," Baldwin said. "What we need is more residential growth, and we're seeing that happening, so that's good news."

DRA reported that construction or site preparation has started on more than 3,500 apartments and condominiums in the downtown area, with an added 5,000 more housing units planned or proposed.

That would roughly double the nearly 8,000 housing units in the area now. Of those, DRA noted that just 279 of the future units are considered affordable housing, though the city is seeking proposals for comparable homes to be constructed near Moore Square.

And while there is a greater demand for purchased housing, virtually all the units in that part of Raleigh will be for rent. Currently, the average rental price for a downtown apartment is $1,905, and the average size is 812 sq. ft.