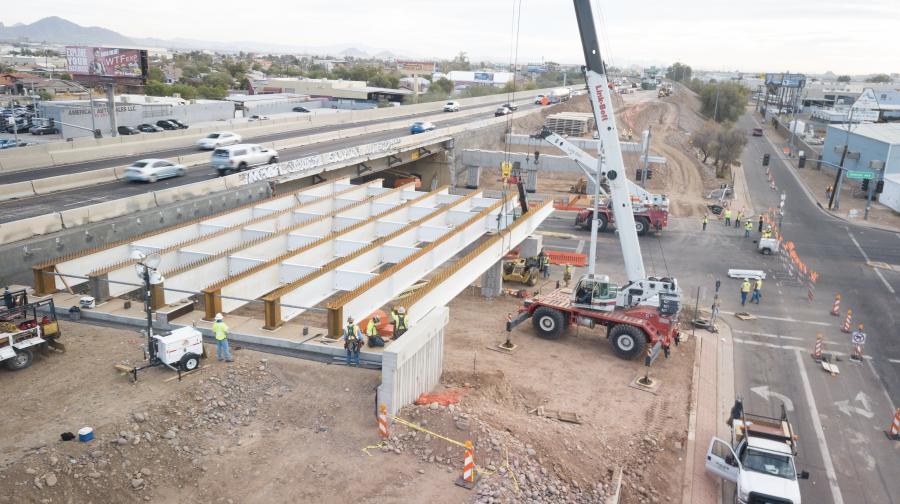 Construction crews installed girders at the south half of the I-17/Central Avenue bridge.

Progress is being made on the Arizona Department of Transportation's project to replace the old Interstate 17 bridge over Central Avenue south of downtown Phoenix.

Cranes are being used to lift and place more than 20 steel girders to support the new southbound I-17 side of the bridge when it is completed. Each girder is between 80 to 90 ft. in length and weighs more than 12 tons.

Crews are scheduled to finish the first half of the reconstructed bridge over Central Avenue by early 2021. I-17 traffic will then be temporarily switched onto the new southbound span to allow work to start on the northbound phase of the project.

ADOT started work on the $13.5 million project to improve the I-17 bridge over Central Avenue in May. The existing bridge, which opened to traffic in 1962, is being replaced by a modern structure with increased clearance for commercial trucks traveling beneath it as well as Valley Metro's future Central Avenue light-rail line.

The bridge over Central Avenue also will be wider to accommodate regional plans for additional lanes along I-17 when future funding is available.

Because I-17 is currently narrowed to two lanes in each direction between Seventh Avenue and Seventh Street while the bridge project is underway, ADOT recommends drivers consider detour routes, including Interstate 10 in the downtown area.

The project is funded in part by Proposition 400, a dedicated sales tax approved by Maricopa County voters in 2004. For more information, visit azdot.gov/I17CentralBridge.

Why This Project Is Necessary

ADOT is removing and replacing the bridge for two primary reasons:

Bridge Age: The bridge was constructed in 1962 and is nearing the end of its useful service life.

Key elements of this project include widening the bridge to accommodate the addition of a future 12-ft.-wide auxiliary lane on the northbound and southbound sides of I-17 and increasing the vertical clearance over Central Avenue to 16 ft. This will enable high-profile vehicles and Valley Metro light rail trains to travel beneath it.