Construction Booming in North Korea, But Who's Paying? 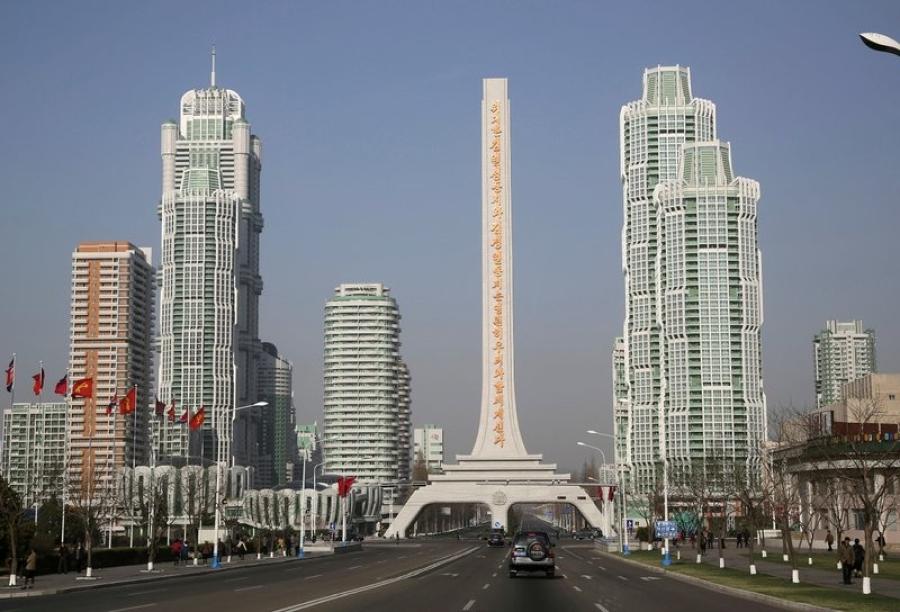 In this April 11, 2017, file photo, vehicles travel down a main road which leads towards North Korea’s newest residential development, Ryomyong Street, in Pyongyang, North Korea. North Korea is racing forward with major development projects some experts believe are aimed at expanding a market for rented or privately owned real estate to bolster his regime against the bite of sanctions. (AP Photo/Wong Maye-E, File.)

North Korea is racing forward with major development projects some experts believe are aimed at expanding a market for rented or privately owned real estate to help fortify the finances of Kim Jong Un's regime against the bite of sanctions over its nuclear program.

A swelling market for private property doesn't sound very socialist, and it's not.

But the chronically cash-strapped government appears to be nurturing a fresh source of revenue — sales of property to the newly affluent class of North Koreans who have made their fortunes on the country's growing, but still largely unofficial, market economy that has come into its own since Kim assumed power.

The pressure on Pyongyang is growing as the Chinese investors who traditionally have propped up its economy are retreating amid tougher than ever restrictions imposed by Beijing.

The construction projects, which could cost well over a billion dollars to complete, have a lot of momentum behind them. They are part of a six-year building spree under Kim that has transformed the Pyongyang skyline. North Korean officials told The Associated Press they hope to have at least some of the developments ready to show off for celebrations in September marking the country's 70th anniversary.

“Since 2012, we have been building a new project each year, so I think one year from now a lot of changes will have been made in the city,” said Kim Kum Chol, an architect with the Paektusan Academy of Architecture, the center for architectural research and design in North Korea. “We have a lot of construction plans.”

He said there are three main projects this year:

North Korea has often used ostentatious projects to inspire nationalistic pride, reward loyalty and enhance the prestige of the ruling regime. But Kim Jong Un seems to have a penchant for spearheading the completion of high-rise neighborhoods and modern, seemingly quite functional recreational facilities.

In theory, housing, education and health care are provided free to all in socialist North Korea, where the state owns all capital, including the buildings, factories and land. Selling property outright, or collecting rents, would pull money out of the pockets of those who can afford it, putting it back into the coffers of the regime. Demanding prepayment could help finance projects underway or in the planning stages.

North Korea has been doing this to some degree for years.

Chinese investment has generally been seen as the key source of funds. So has slow but steady growth in the North's domestic economy, helped along by a swelling sector of entrepreneurs who have savings in foreign currencies like the U.S. dollar and Chinese yuan.

These people, known as “donju,” or money masters, have been more visible since Kim Jong Un assumed power, creating a natural market for better housing that didn't exist in the past. Most live in Pyongyang and the Wonsan area, where construction is most active. A big part of the building boom is focused on high-end properties in prime locations, like the Pyongyang city center or along riversides or ocean fronts that might be expected to appeal to them most — and have a higher market value.

Whether such projects would ever pay for themselves is unclear. That could help explain why Kim has made diplomatic overtures over the past few months to Seoul and Beijing — two potentially huge pools of investment and aid if the political tensions on the peninsula ease.

Before stepped up sanctions kicked in last year, North Korea made a massive sell-off of minerals to China that coincided nicely with the building boom.

William Brown, an economist at Georgetown University, said the “liquidation” of some state property makes fiscal sense, despite the cost to socialist principles, especially given North Korea's chronic trade deficit with China.

The downturn in Chinese trade and new investment since about September and Kim's inability to get foreign loans or woo other investors has cast serious doubt on the future of the economic boom and is jeopardizing funding for the military, said Benjamin Katzeff Silberstein, a scholar with the U.S.-based Foreign Policy Research Institute think tank and co-editor of the North Korea Economy Watch website.

Dwindling trade with China is not only sucking foreign reserves away from the regime, but also hurting businesses the “donju” rely on as well, a one-two punch to the economy that could get significantly worse in the months to come, possibly undermining demand for luxury property.

“The state really doesn't have any sustainable revenue source as of now,” Silberstein said.