Contractor Builds House Fit for Frodo: A Look Inside the Hobbit House 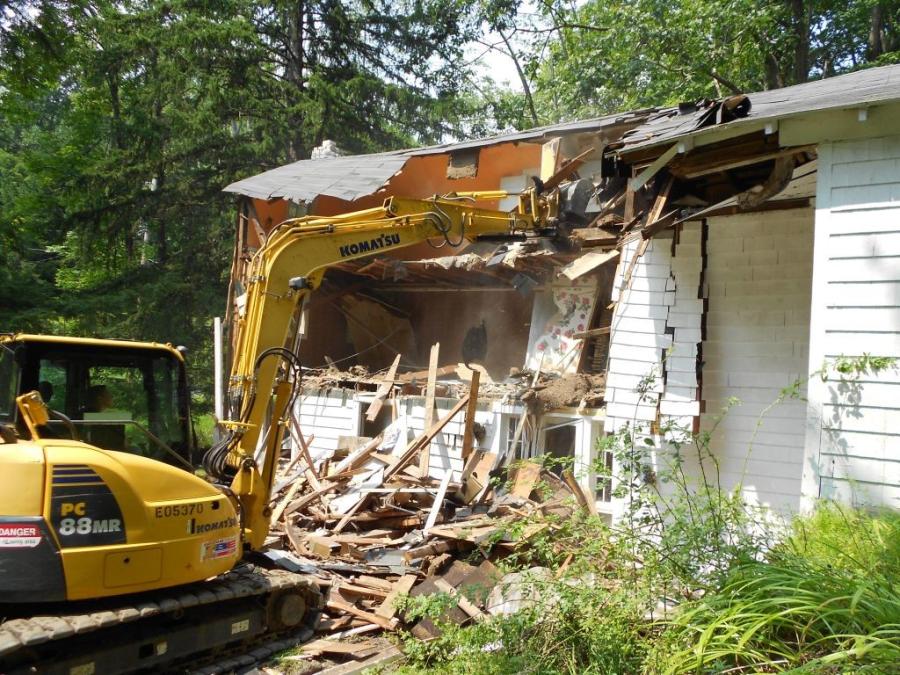 With the help of his children, wife and family friends, Costigan first demolished an existing house with a rented Komatsu excavator and a skid steer. (Photo Courtesy of Jim Costigan)

It's a house fit for a hobbit—a dwelling of which Bilbo Baggins would certainly approve. And that's no surprise, as Jim Costigan, mastermind behind the Hobbit House was inspired by the 2001 movie, The Lord of the Rings: The Fellowship of the Ring, to build this whimsical structure in his home shire of Pawling, N.Y.

Of Bag End, the unique home that was brought to life in the movie, Costigan said, “I thought it was the coolest house I had ever seen.” About 12 years ago, Costigan approached his wife about building a shed in his yard of the same design.

“The way the property is in the back kind of lends itself to an earth shelter thing, so I built the concrete hobbit shed. That was the original house I built,” he said.

Costigan shared the building process online at myhobbitshed.com, which elicited a positive response.

“I got a whole bunch of comments about why aren't I living in it, am I renting it out, when am I going to build more of them, and all this other stuff,” said Costigan. “I started to think about how to build a real one for people to live in. That started a whole chain of events to what I created here.” 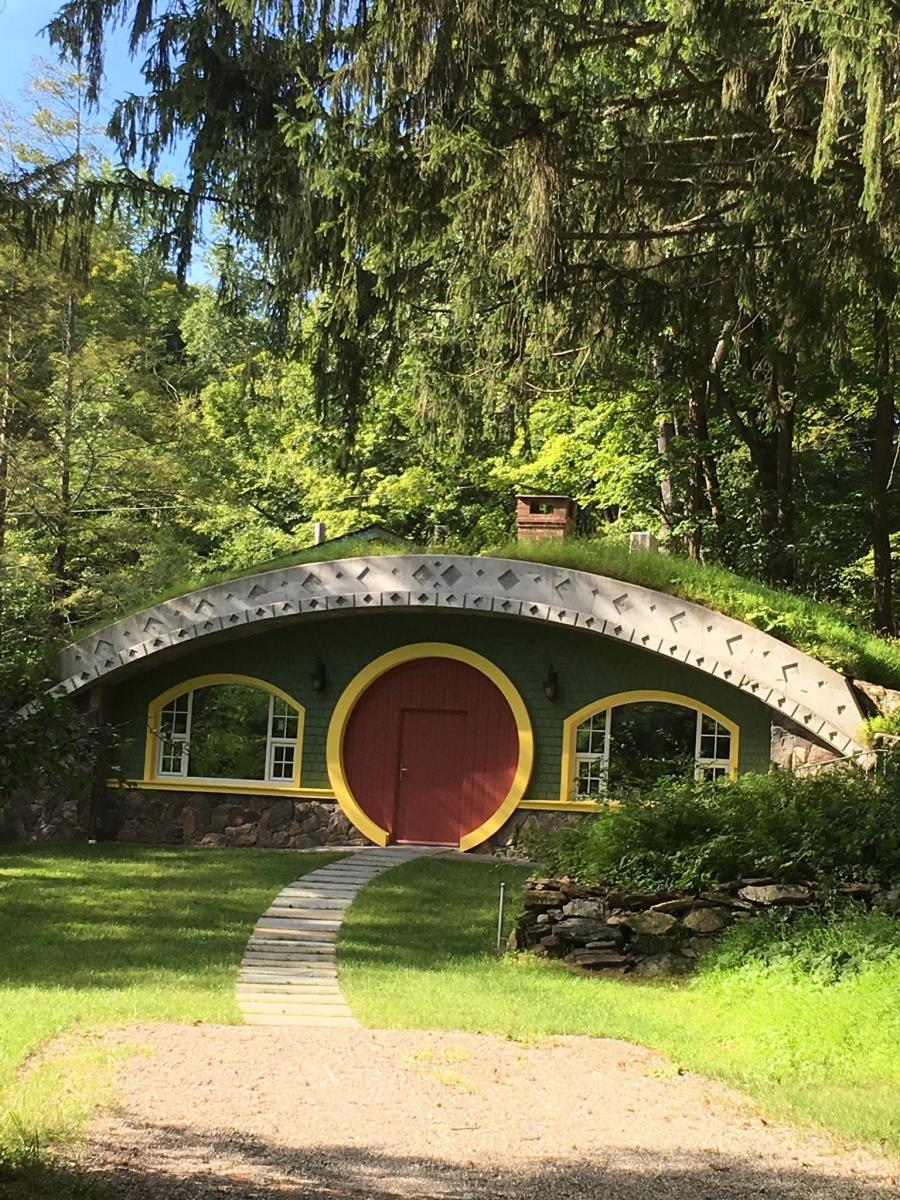 “After I saw the movie, I said somebody had to have built one of these already,” he said. “When I went online I couldn't find anyone who built one. Then I found people who had some crazy idea of how to build one. People who are not involved in real construction don't really know anything about how to build anything. Basically, it was a lot of stupid ideas.”

A House Fit for a Hobbit

That's what ultimately pushed him to begin to think about how he would build a real, inhabitable hobbit house. Costigan is in the construction business himself — specifically, in building reinforced concrete superstructures for residential high rises. Between his years of experience on the job site and his education in civil engineering, he had a good idea of what it would take to make this project a success.

“It's not really that simple,” he said. “Any substantial amount of dirt on top of a structure is a huge load. The loading requirements for the house are tremendous because of the dirt load and then they have to impose a snow load on it. I came up with what I wanted, like a proposal, and then I had a structural engineer check the structure and I had this specific guy come up with the final sort of design of it. It was sort of my design, but then he refined the structure of it to make what I build. He made it so it could withstand the load [of the dirt that sits on top of the structure].”

The house is built on a 1.7-acre plot of land about 10 minutes away from Costigan's home. With the help of his children, wife and family friends, he first demolished an existing house with a rented Komatsu excavator and a skid steer.

“My kids operated the excavator when we demoed the house,” said Costigan. “They were in high school. My one son, he was way better at the skid steer than I was. I told him he could just finish it. It was kind of a relief for me because I was having so much trouble with the machine. He did a lot better than I did.” 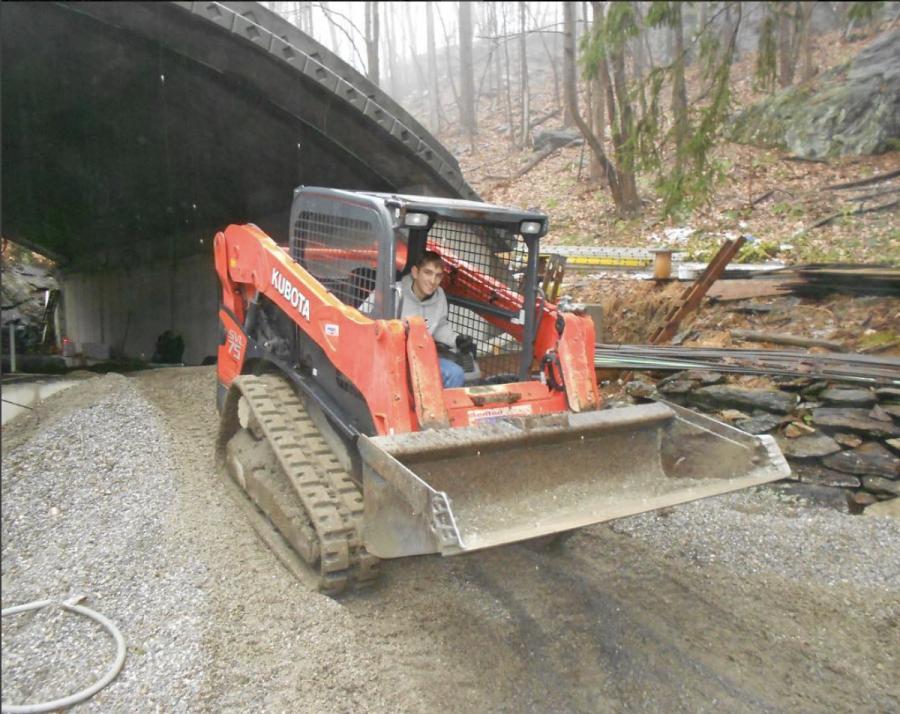 To gain greater access to the site, Costigan had to build a bridge over a stream that ran through the property that would support equipment and deliveries.

“There was a wooden bridge there and I kind of went over it with the excavator and some planks that I put down,” he said. “We dug footings on either side, put some I-beams across it. I built the structural bridge so we could get concrete trucks over the stream. That was a big deal.”

Work on the project was primarily limited to weekends — and Costigan rarely had aid from industry professionals.

“The only help I really had was that I had a professional excavation guy come in,” he said. “He covered the [hobbit house] with the dirt and the soil and he set a bunch of these huge rocks around the property for me and he graded it and he put the driveway in for me. I had a stone mason come in and do all the stone work, but we did everything else.”

But bringing a fairly straightforward-looking hobbit house to life is more complicated than many might think. Before Costigan could even begin the building process, he had to see if the soil would even support his vision.

“We had to do soil boring tests on the site before we even started,” he said. “That was kind of a weird piece of equipment. The engineer wanted to see how stable the soil was. It's almost 12 inches of soil [on top of the hobbit house] and then they impose one of the worst-case scenarios of snow load on it, because the house is so super-insulated that the snow won't melt, really. It actually melts from the sun — not like the typical house where you have a peaked roof and you have a lot of heat escaping.

For the project, Costigan chose to work primarily with the material he knows best: concrete. He used a concrete pump to pour the footings, walls and slab. Though quaint on the outside, the resulting structure is incredibly strong. 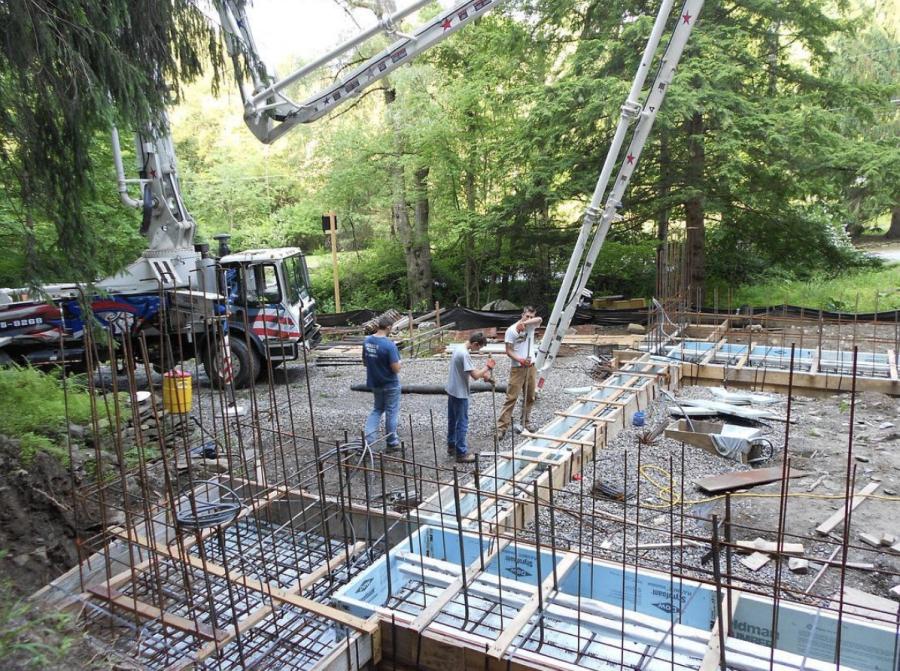 “It's like a glorified highway overpass.” Costigan said “You could drive a concrete truck on top of that building and it won't move. It's practically a bomb shelter… It's really a feat of engineering what we did.” 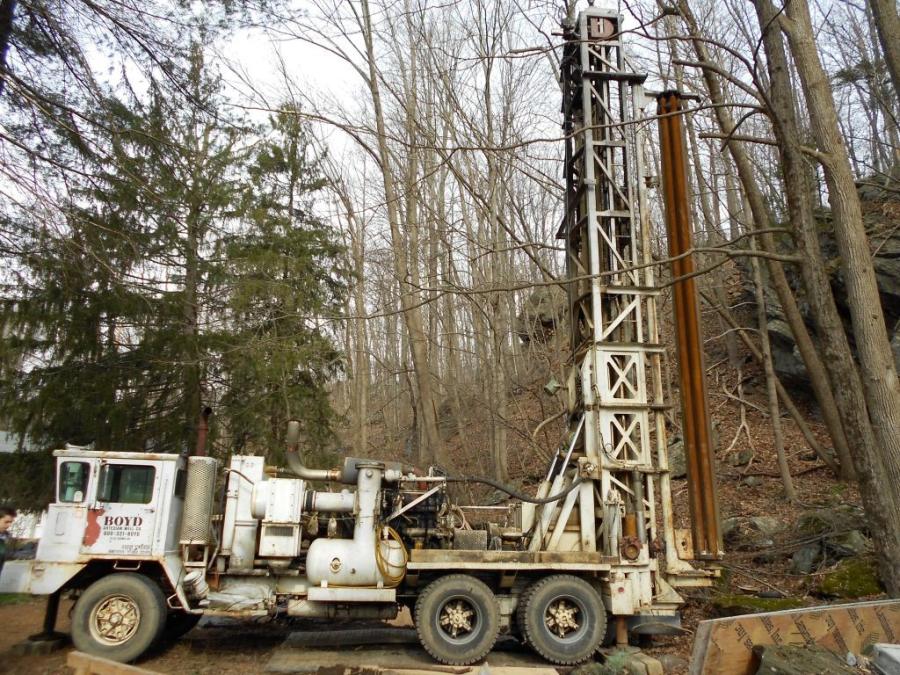 What's more, Costigan said he chose to build the house according to passive house standards, an energy-efficient approach that is popular in many European countries. In doing so, Costigan said he needed to order the windows and doors from Europe.

“When I built the house, passive-certified windows and doors and skylights were not even built by American companies, yet, so all the windows and doors and skylights were imported from Ireland and Poland to make the house passive,” he said. “It's not a certified passive house, but it is built to that standard. It was too long of a project for me to go and get it certified, but the standards that they use is what I used to build the house with.”

The project took Costigan seven years to complete. For comparison, the original hobbit shed that houses his yard equipment at his home took three years.

Although Costigan said the house looks small from the outside, it is deceptively large at 1,500 sq. ft. It features two bedrooms, two full baths, a kitchen, a dining room and a living room, as well as a circular hallway. In addition, there is a utility room with a washer, dryer and sink; it is equipped with air-conditioning, heat and a hot-water heater from Germany. For a final whimsical touch, a patio sits atop the house's grassy roof.

“If you are into nature and you are into being part of the environment, this house is part of the environment,” said Costigan. “You are taking a footprint and then giving back to nature with this house. The side of the house is like grass when you look at the pictures. When you are sitting up there [on the rooftop patio] on a nice day and you are watching bugs and birds fly by and chipmunks are running by you on the roof — it's a pretty incredible situation that you are in.” 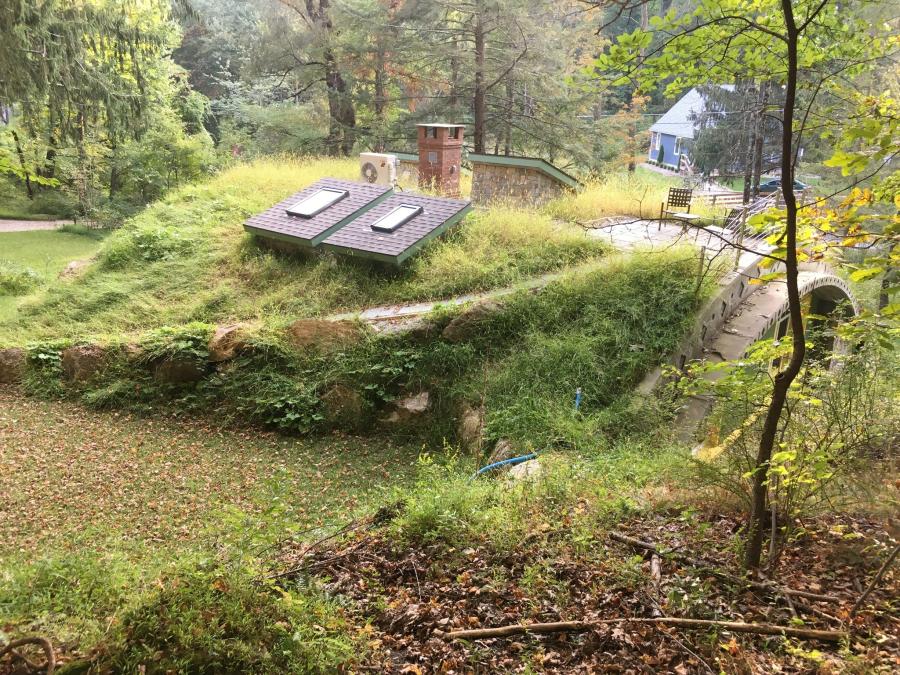 For all of the time and work Costigan put into the Hobbit House, he has decided to sell.

“It's ideal for a summer home or a weekend home for someone who lives in Manhattan or even a single person like and artist or a writer — or even a retired couple,” he said. “It's wheelchair accessible; there are no stairs to get into the house. There were some old couples that came up and they really liked it a lot. They just weren't in the market for a Hobbit House. I'm still looking for that person.” 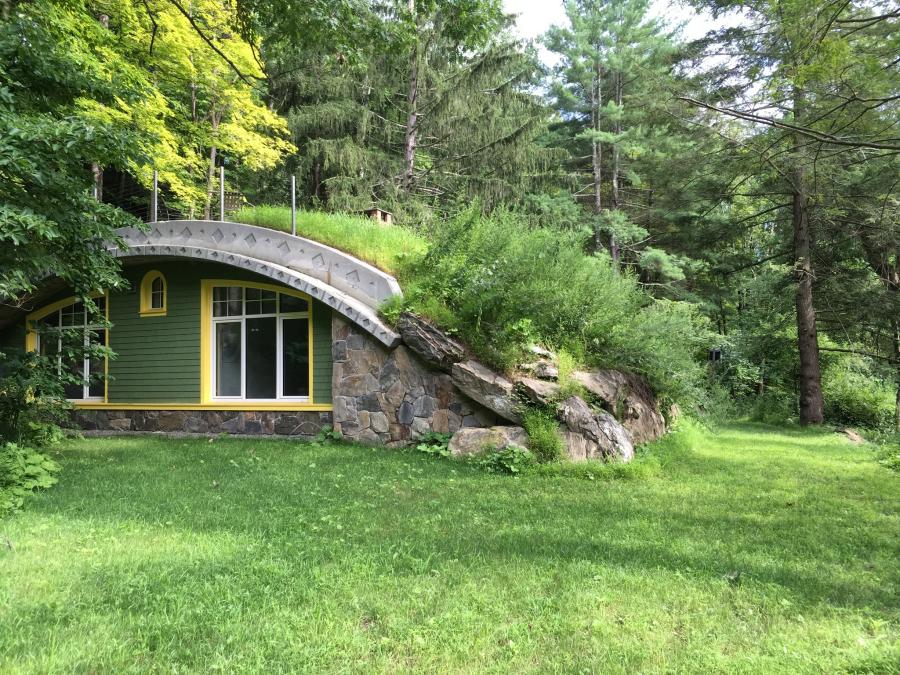 “The price tag on the house is high,” he acknowledged, “but to me it is more like art than a house. It's not like you can say you don't like this Hobbit House [and say] 'I'm going to go down to another one they just built down the block.' You are not going to find that.”

The right buyer can get creative when putting the final touches on the house's interior, as Costigan has refrained from doing it himself. He said he wants its future owner to have the chance to express their own interpretation of what a hobbit house interior should look like. 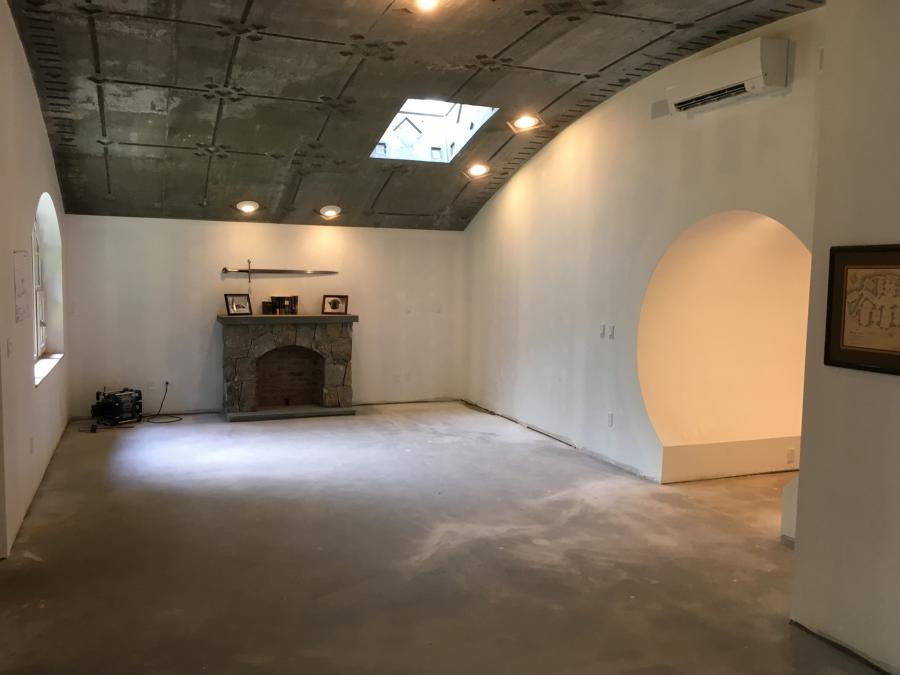 “I didn't put any of the countertops in the bathroom and the kitchen,” he said. “I didn't paint any of the walls; I just primed them. I didn't do any floors. I had a couple of open houses and believe it or not, everyone who stopped by the house had a different way of finishing it. A lot of people wanted to leave the floors concrete. Basically, the house is done for the final buyer to customize. It's all very personal. I didn't want to put something in and then have someone say I have to rip that out in order to finish.”

Any hobbits – or humans – interested in the Hobbit House can view its online listing here: https://www.realtor.com/realestateandhomes-detail/16-Wilkinson-Hollow-Rd_Pawling_NY_12564_M31089-71064#photo6