There are "lifts" going up on the side of the existing concrete towers that will transport the thousands of workers who will be on site when construction is under full-steam. 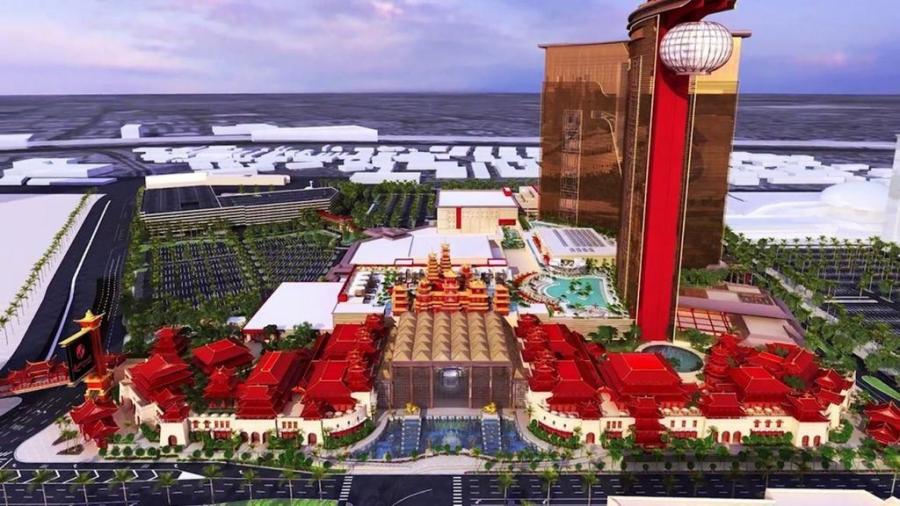 Resort's World's $4 billion Asian-themed resort should be completed by 2020.

The under-the-radar work being done on the Strip's $4 billion Asian-themed resort is about to become much more obvious.

The signs are already there: glass hangs from one of the concrete towers. It's a test, Resorts World tells me, to determine which shade of red — and there are several of them hanging — will be the best to cover the 3,000-room resort. Red will be its dominant color.

There are new cranes on the property which will be used to build the much larger tower cranes that will construct a big portion of the resort.

And there are "lifts" going up on the side of the existing concrete towers that will transport the thousands of workers who will be on site when construction is under full-steam.

Resorts World is expected to be finished in 2020, the most tangible sign of progress on the North Strip.

But there are others, too. On Sahara, Lucky Dragon — now 6 months old — is the newest North End resort to open.

"In this market, especially on the North Strip, it's definitely good to be focused," Seager said.

At six months, his resort is doing tweaks: It is moving its acclaimed Pearl Ocean Restaurant from a second-story location to the main floor.

"The big reason we're doing that move," Seager says, "is our VIP gaming, which is also on the second floor. Upstairs has been so successful that we are basically doubling the size of that space."

The Lucky Dragon is a North End success story, along with the W Las Vegas, the boutique property that shares a location with the SLS, which is changing ownership. The Meruelo Group, owners of Reno's Grand Sierra Resort, is buying the SLS, which has struggled to find its footing.

Next door, dirt removal work continues at the site of the All-Net Arena. Its point-person, former UNLV basketball player Jackie Robinson, has told News 3 in the past the project remains viable.

Contacted today by News 3, the owner of the Fontainebleau, the mothballed resort felled by the Great Recession, says work is underway on a "wrap" to beautify unfinished portions that border the Strip.

"We're likely to see over the next, we'll call it the next 20-year horizon, that the North End of the Strip becomes the new darling of the Strip," says real estate broker John Knott, with CBRE.

According to Knott, that's because Strip development heading south could become prohibitively expensive. The North End, he says, could be an attractive, less expensive blank canvas.