Disruptions were being tracked at 20 job sites, but the actual number may be higher. 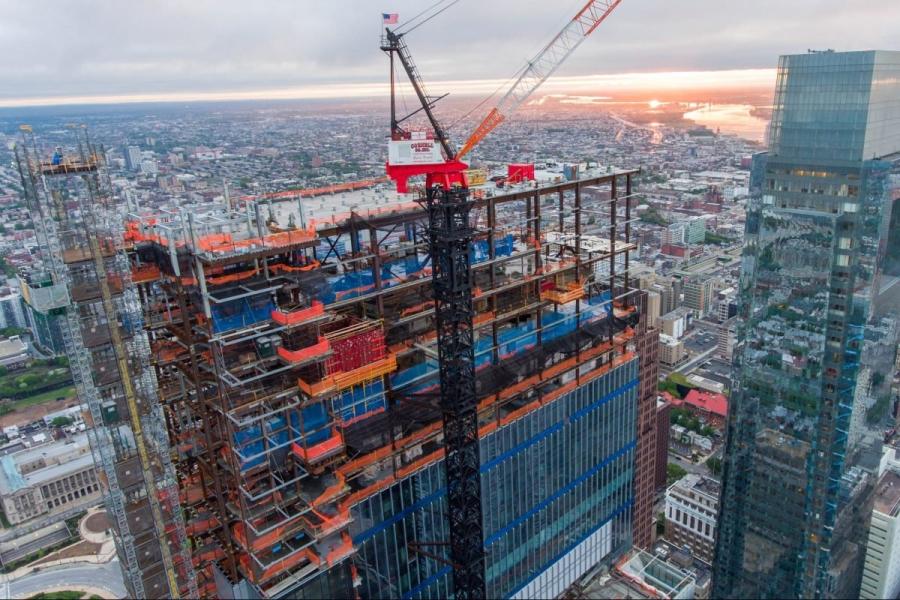 A Philadelphia-area union work stoppage has slowed construction on buildings such as the new Comcast Corp. tower. (phillybydrone.com photo)

Construction in Philadelphia and four counties in the Pennsylvania suburbs — on projects as large as the new Comcast tower and as swanky as the Hotel W — is slowing to a halt because the General Building Contractors Association of Philadelphia and the union representing hundreds of crane and heavy-equipment operators have reached an impasse on contract negotiations.

“Today, we pulled our operators off all the job sites,” Tom Danese, recording secretary of Local 542 of the International Union of Operating Engineers, headquartered in Fort Washington, said Tuesday.

The union's contract with the General Building Contractors Association (GBCA) expired April 30. Both sides say they agree on core compensation — a raise of $2 an hour over the entire package for the length of the contract. Instead, the two sides are negotiating over the future of a job category (oilers), double time on Sundays, and whether union workers should contribute part of their paychecks to the association for its marketing and other efforts.

No talks have been scheduled. Also, no local highway or bridge work is affected by the stoppage.

“It's damaging. The more of this type of strike we have, the more schedules will get behind and the more owners will question how they should build in the future,” said Benjamin J. Connors, president of the GBCA. He said both the contractors his organization represents and the union are believers in the value of union labor at construction sites.

“Most of all, we're trying to advance union construction,” Connors said.

Disruptions were being tracked at 20 job sites Tuesday, he said, noting that the actual number may be higher.

Danese said the union did not set up picket lines because it did not want other building trades to lose hours. Many unions are voluntarily staying off job sites, he said.

At the Comcast construction site in Center City around noon, workers were still on the job.

As a practical matter, the absence of operating engineers will affect a construction project. They run elevators that move people and equipment and operate cranes that hoist beams and heavy material. Danese said that during the walkout, which began Tuesday, the union was keeping one crane operator at each site, in case someone is hurt at a higher level and needs to be moved to safety.

The union shut a few jobs earlier in the month, Danese said, but returned to work at the request of Mayor Kenney, who met with both sides June 21 and asked them to continue negotiating.

Contractors, including subcontractors who hire crane operators, sign negotiating rights over to the GBCA to create one uniform contract instead of individual deals between the union and contractors.

Connors said the GBCA would be willing to accept the $2-an-hour wage increase — bringing the top package to $73 an hour for wages, pension, benefits, apprenticeship training, and an in-house unemployment benefit — and leave the rest of the contract as it is for a year, giving the two sides about 10 months to negotiate the other points.

Both sides would prefer a five-year term.

It's a matter of modernizing the contract to fit today's construction conditions, Connors said, showing project owners that unions and union contractors are willing to work with them. “Ask them what an oiler does,” he said, suggesting that on some construction sites, some job categories such as oiler are becoming less necessary.

The oiler is the No. 2 position in heavy-equipment operation, Danese explained. Oilers handle daily greasing of parts, maintenance, and signaling, with the work most often done by apprentice oilers, who learn how the machines work by keeping them in good operating shape. When apprentice oilers become journeymen, they usually get a new title, such as crane operator. Over the years, the oiler position has been eliminated on the smaller cranes, with maintenance handled by the operator.

In Philadelphia, Danese said, all apprentice oilers are women or minorities.

Contracts have been reached with all groups in all counties and in Delaware, except for building workers in the five counties that negotiate with the GBCA.