The project will serve the central and northern ends of Effingham on a routine basis, but will be available to the entire county, along with parts of the region, for major events and tournaments. 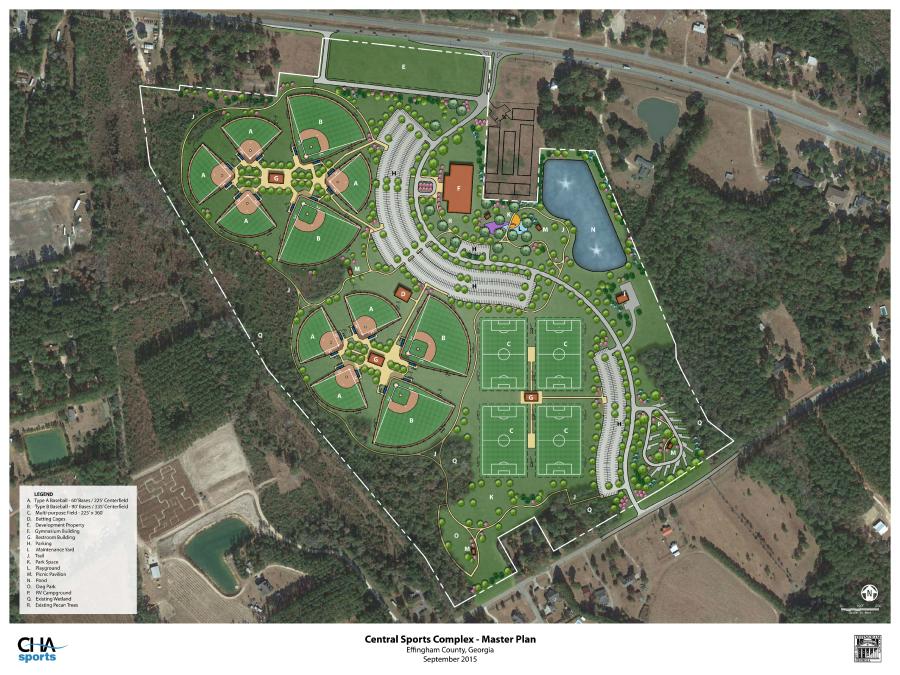 Officials in Effingham County, Ga., are preparing for a new central recreation complex that will initially include two baseball fields, three softball fields, a walking trail, playground, picnic pavilion and batting building. The facility will be known as the Clarence E. Morgan Complex, in honor of the longtime teacher and coach who helped make the facility a reality.

“The project is dear to many a person who's worked so hard over the years. We've had recreation sports for youth and adults long before the establishment of a recreation department in 1975. I have been involved over 50 years, and it's an honor the Board of Commissioners decided to name it in my honor. What a great feeling,” said Clarence E. Morgan, director of Effingham County Recreation and Parks.

Phase I work also calls for a concessions building, maintenance structure, parking lots and roadways, a GDOT decel lane and water and sewer infrastructure to support future development. The project will serve the central and northern ends of Effingham on a routine basis, but will be available to the entire county, along with parts of the region, for major events and tournaments.

“Effingham has always been a big player in the sports world in south Georgia, but the last 15 years has hosted many Georgia Recreation and Parks Association district and state tournaments,” said Morgan. “This will give us a top of the line facility to bring outsiders to our communities. This project is looked at with much appreciation and great thoughts about what is happening in Effingham County.”

The central recreation complex is being built on the west side of Ga. 21, south of Springfield, and is being funded through the Special Local Option Sales Tax (SPLOST). Partial funding, approximately $100,000 is coming from a land and water conservation fund grant.

The first phases will cost around $8 to $10 million, including the entire 120 acres purchased. A gymnasium, five more athletic fields and four multi-purpose (football, soccer and lacrosse) fields are all part of the plan. The gym will likely be the next project, in about a year.

For Morgan, construction of the complex is a milestone in his career.

“When you think about all of the irrigation lines, storm piping, water, sewer, lighting rough-in, electrical rough-in, etc. that goes into building a ballpark, it's a wonder that we don't end up spending more time repairing damaged lines than we do actually installing them. We always go to great lengths to coordinate and lay out the different routes and depths of the various underground systems, but it is almost impossible to achieve a layout without some lines hitting each other.”

“No major issues have been encountered other than some isolated areas where existing soil was found unsuitable by the testing agency, which was replaced with suitable fill and then properly compacted,” said Potts. “This site was well suited for this application.”

Asphalt paving of roads and parking lots has yet to be finished, as well as landscaping, concrete walks, the ADA playground, the batting building, painting, windows, drywall, acoustical, door hardware, specialties and signage. The most time-consuming part of the current work involves concrete sidewalks and asphalt paving.

Roughly 85,000 cu. yds. of dirt is being moved during Phase 1 construction. Large earth-moving equipment, especially at the outset of the project, has been required to complete various tasks. Heavy machinery ranges from pans, tractors and dozers to off-road dump trucks, track hoes, loaders, vibratory rollers, backhoes and graders.

“You need a good design, which we definitely have, you need top quality subcontractors, good materials and a highly skilled team of supervisors and managers working in conjunction with the owner, architect, and engineers to build the project. Coordination is one of the biggest factors in building a successful ballpark.”

According to Potts the site was a large open field, which included a pecan orchard, and proved conducive for construction.

CHA Consulting Inc. serves as the prime consultant on the design team. CHA was responsible for design of the ball fields, sports lighting and all vertical structures, including the concession/restroom building, picnic pavilion and maintenance building.

The firm completed a facilities master plan for the Effingham County Recreation and Parks Department in January 2015.

“We reviewed all of the existing sports and recreation facilities in Effingham County against state and national standards,” said Graham. “Through that review and community meetings, we determined that the county needed additional, quality sports facilities to satisfy the demand in their recreation programs.

“The concept plan to develop a new multi-phase recreation complex on Hwy 21 was developed as part of that master plan. Once the lands were secured by the county, we started work on the design of the complex in June 2015.

“The biggest challenges on this project, as with many public projects, have been related to budget. The county has lots of needs for new facilities and limited SPLOST funding, so we have worked creatively with county staff and the construction manager to stretch those dollars as far as possible.”

Graham said the existing silty sand soils on site were fine for typical construction. However, they were not suitable for use in the ball fields.

“We specified a rootzone mix (sand cap fields with organic amendments) to provide a suitable growing medium for the outfields. We also specified a top quality clay infield mix and worked closely with the county and construction manager to find a suitable source in the State of Georgia for that material.

“We are past the major earth moving and utility portions of the project, so now we are focusing primarily on finishes. We're making sure the bleacher covers, dugouts, backstops and other fencing are installed properly around the ball fields. Soon we will be focusing on the finishes inside the buildings and the hardscaping and landscaping inside the complex.”

Graham said working on the highly anticipated project has been a rewarding experience from the beginning.

“We have had a great team on this project across the board, including the county staff, the construction manager, the site superintendent and our design team. It takes a great team to deliver a quality product, and that has been our number one goal since the beginning of the project.”

According to Wesley Sherrod, Effingham County civil engineer, one of the biggest concerns on the project was minimizing the costs associated with the rough grading.

“We tried to utilize on-site dirt by over-excavating our detention pond, but in so doing, had to stockpile lots of unusable dirt,” said Sherrod. “Moreover, the ball fields were graded sloping toward the outfield corners, rather than sloping downward in a more standard manner in all directions from the infield to save in required fill.

“Another challenge was using this project as a piggy-back of sorts for the city of Springfield's future utility development. This required lots of coordination between the county and the city, in order to serve both the purpose of supplying the recreation complex immediately and upon build-out and the purpose of allowing for the city's future development expansion.

“Given the detailed grading required, along with the necessary fine grading coordination with the CHA ball field experts, I believe that the preparation of the massive 3D grading file required was the most time consuming part of this project.”

Sherrod said the intent was not to skimp on any aspect of the recreation park, even if that meant completing it in several sub-phases.

“That was certainly the case with the selected infield mix. The specifications for the required 'sweet spot' mixture of clay, silt and sand, could not be achieved via local borrow pit sources.

“Through lab testing, it was determined that a certain supplier could meet those conditions. Thus, the infield mix was imported from the supplier to ensure the right balance, avoiding field hardening and proper playing surface, given the amount of maintenance anticipated.”

There were a few unexpected pockets of unusable soils that had to be demucked. Erosion control is ongoing and ensures that no sedimentation leaves the site. Generally, its upkeep has been satisfactory. Storm water monitoring has been challenging, as little to no runoff from the over-excavated detention pond is leaving the site.

In addition to soils testing, on-site wetlands had to be delineated as a portion of a required overall topographic survey. Regarding hydrology, said Sherrod, “The detention pond is much larger than per design. Only recently has the storm water reached the outfall level. Further, the retained water will be utilized for on-site irrigation.

Sherrod said that water and sewer will be owned by the city of Springfield upon completion.

“There appeared to be little deviation from design. All storm drainage has been installed. Some minor top grade adjustments will be necessary.”

Clearing and grubbing operations went according to plan. The property consisted of scattered trees and shrubs with native vegetation. As many trees as possible were preserved.

As for site improvements, “Water quality and runoff reduction will be implemented to a notable degree, and runoff quantity will be reduced. The park should be very aesthetically pleasing, Sherrod said.

Sherrod said, “The park in its final state should be something that the citizens of Effingham County would be pleased to showcase and utilize for years to come.”