Rock walls were built throughout Rocky Mountain National Park in the 1930s and 1940s, many of them by Civilian Conservation Corps work crews. 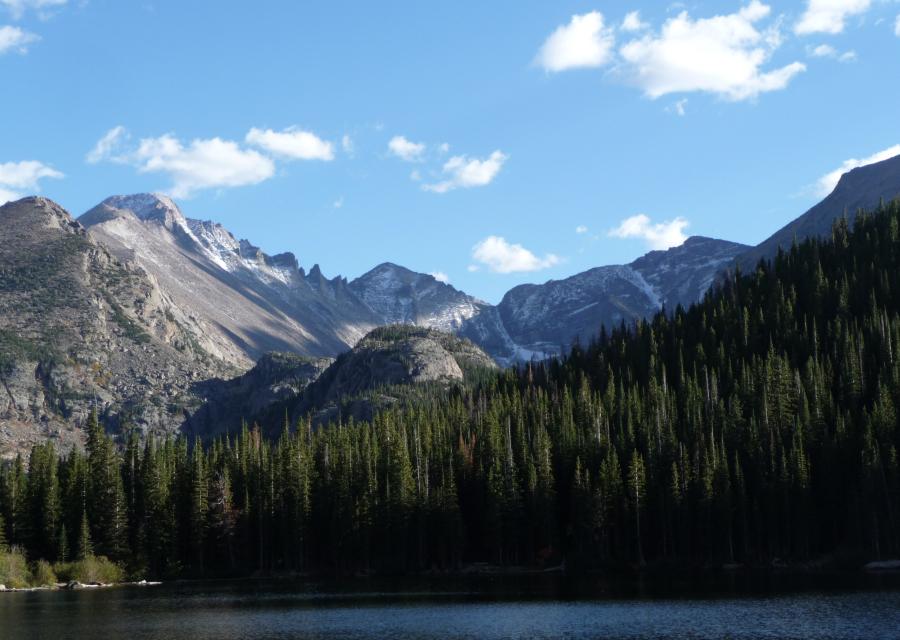 You might also describe the men as unofficial archaeologists and historic preservationists, unearthing rock work that is almost buried and intricately rebuilding it stone by stone.

“It's a way for us to physically be a part of history,” said Roman, a mason who has been repairing stretches of rock wall every summer for 16 years.

This summer, he and Browning have teamed up on a 150-foot stretch of wall along Trail Ridge Road, an area that overlooks the Never Summer Range, the Kawuneeche Valley and the headwaters of the Colorado River.

“It's not a bad office,” said Roman, though the work is physical as well as mental, painstaking, meticulous and, according to both on the team, very rewarding.

Each year, they complete one section of the more than 2,000 feet of stone wall that stretch throughout Rocky Mountain National Park, most of it untouched in the seven decades since it was originally placed.

&#8220Every rock was shaped by hand,” said Roman, showing how the different sizes of rocks fit together almost like a puzzle.

“We reuse every single rock, and we put it back where it was.”

Rock walls were built throughout Rocky Mountain National Park in the 1930s and 1940s, many of them by Civilian Conservation Corps work crews.

That program was established in 1933 under Franklin D. Roosevelt's New Deal to create jobs for young men during the Great Depression, employing about 3 million men during its nine-year tenure.

These work crews traveled the country for nearly a decade performing manual labor, particularly jobs related to conservation of federal and state natural lands, and making about $30 per month. Congress shut down the program in 1942 with World War II and the draft underway.

These labor crews completed several projects in Larimer County and in Rocky Mountain National Park, including construction of some but not all of the rock walls. Many had already been started earlier in the 1930s, according to information from the national park.

Over the years, the walls have settled and some of the roads have been rebuilt at a higher elevation than they were when originally completed, as is the case with Trail Ridge Road, which was finished in 1932.

Some sections of the wall along Trail Ridge are almost completely buried.

The portion Roman and Browning are working on this summer, for example, had only a few inches peeking above the ground when they started.

So the first step in their restoration process was to carefully dig out the wall, almost like an archaeological expedition, making sure to keep everything intact.

Then, they photographed the wall as it was originally built from both sides as a reference to make sure that, later in the process, the rocks were returned to their original locations.

With hand tools, they then loosened the original mortar and removed each rock, one by one.

Each stone (about 250 total) was cataloged by number so the masons know where it belonged on the original wall, then piled and stored on pallets.

Next, the team of Roman and Browning built up the base along the side of the road using 72 cubic yards of material, constructed a form for a concrete footing, then poured that base to ensure the structural integrity of the wall for the future.

The final process involved returning the rocks to the wall, one by one, following the numbers and photographs.

Each rock is placed in fresh mortar as the duo rebuilds the stone puzzle, eyeballing the placement as well as checking and double-checking measurements.

“It's a pretty time intensive process,” said Roman, noting that it literally takes all summer to complete about 150 feet.

When they get to the rebuilding phase, the men can place up to 10 rocks per day, on a good day. The larger rocks may weigh up to 350 pounds.

For Browning and Roman, the process is well worth it.

They admire the skill of the men who built the wall decades ago and the time they put in to shape and place each granite stone. Their skill levels varied, Browning noted, pointing out a very visible record of that in the differences among the walls remaining today.

The stretch he and Roman are working on this summer, near Farview Curve past Lake Irene, is a work of art to Browning.

“I would like to meet the guys who worked on this wall because they are that good,” he said as he and Roman rebuild it to its original state.

They are dedicated to the work because they believe in preserving the history, and they feel that the rock barrier fits into the character of the park much more than a steel guardrail.

“This isn't like the side of I-70,” noted Browning, pointing out the majestic scenery stretching afar behind the rock wall near a pullout where people love to stop and take photos.

Added Roman, “These stone walls have an old-timey feel. They represent when this road was built. It represents the native building materials. It's also more artisan. There's more character to them.

“It's a great opportunity to reinvest them, give them a new life. They've been doing their job for 70 years. We hope to give them another 70.”

Information from: The Tribune of Greeley, Co, http://greeleytribune.com