On a chilly afternoon in January 2018, crews hooked the final piece of structural steel to a large crane and hoisted it to the top of the structure, as the crowd cheered and cameras flashed 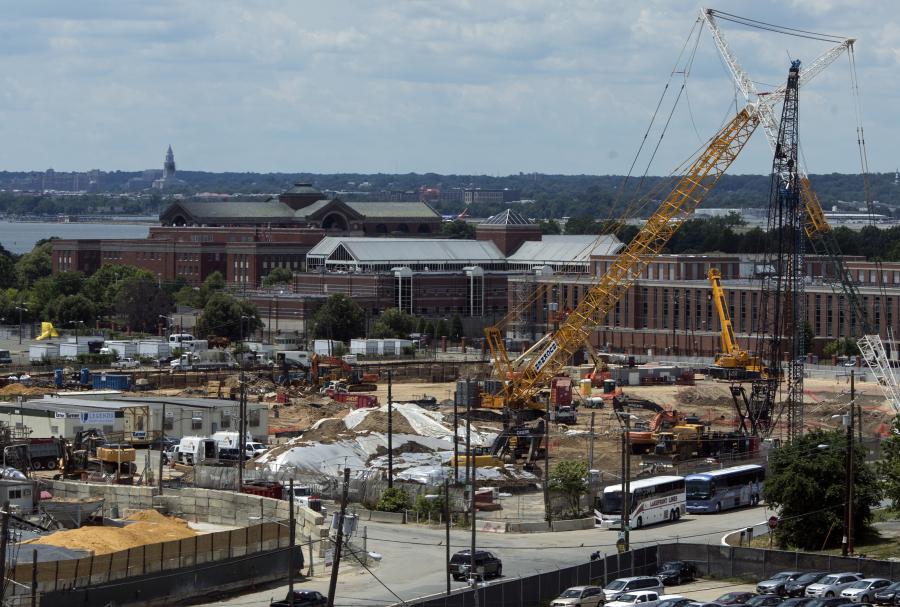 A modern stadium that will serve the most decorated franchise in U.S. soccer history is nearing completion in the District of Columbia. The more than half-a-billion dollar investment in Audi Field, the new home of D.C. United, includes an adjoining mixed-use development in the Southwest Waterfront District.

“It's been D.C. United's vision to construct a soccer-specific stadium in the District since the club's inception during the inaugural year of major league soccer in 1996,” said Lindsay Simpson, D.C. United director of media and communications. “After several failed attempts to secure land in the District, our current ownership team made it a priority to secure a stadium in the nation's capital. The construction of the 20,000-capacity stadium will not only provide a catalyst for economic growth in the area, but will make the southwest D.C. location a prime destination for sports and leisure.” 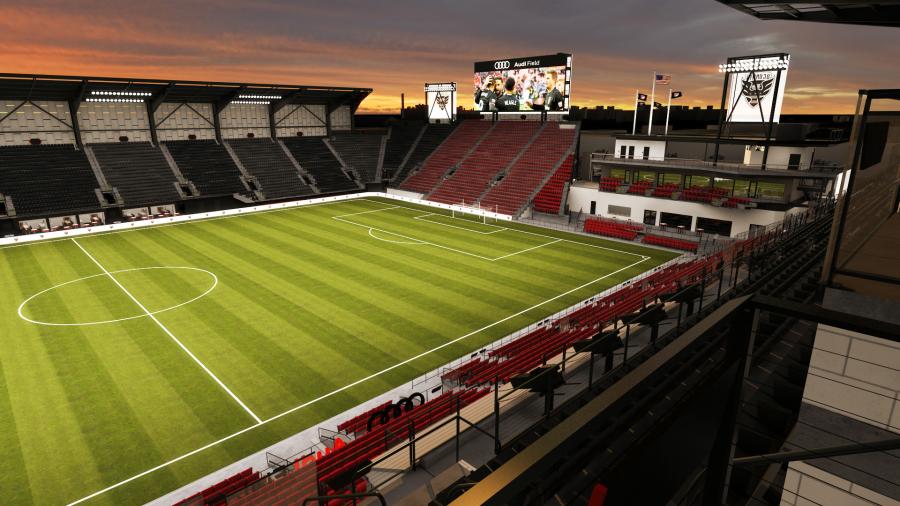 The stadium project was designed to host sporting and cultural events, concerts and community activities. It will include 500,000 total sq. ft. of mixed-use retail and residential space on site. Through an integrated design approach, the stadium will be a leader in progressive mixed-use accessibility and is expected to receive LEED Gold certification.

“Audi Field will offer fans an unforgettable experience,” said Simpson. “The stadium will feature seat locations that put fans in the middle of the action, and D.C. United has partnered with world-famous chef, José Andrés, in conjunction with Levy, to provide fans with a world-class dining experience. Andrés will curate all concessions for the venue, using it as an opportunity to curate a menu that's representative of the global nature of soccer.”

Fans and members of the community have waited more than two decades for a permanent home for the team. On a chilly afternoon in January 2018, crews hooked the final piece of structural steel to a large crane and hoisted it to the top of the structure, as the crowd cheered and cameras flashed. 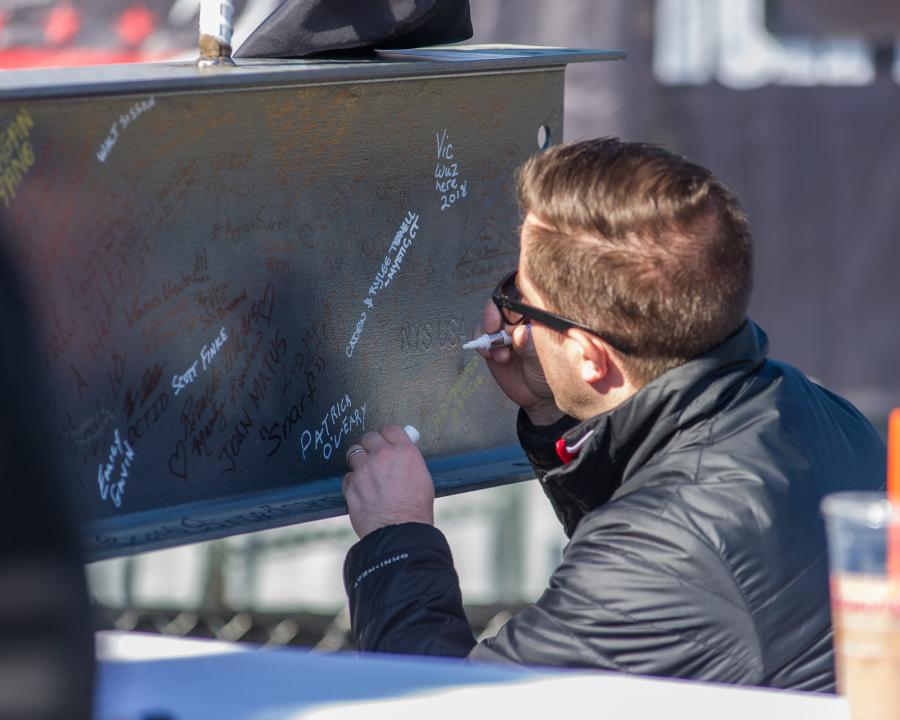 “Thousands of fans and community members stopped by Audi Field to sign the final structural steel beam before it was lifted into place during the topping off ceremony,” said Simpson. “Every detail that went into this stadium was made in an effort to maximize the individual fan experience. We are applying the latest technological advances throughout the venue that will enhance our fans' visit and are working closely with our supporters to curate a thrilling game-day atmosphere.”

“This process hasn't been easy, but it has made this moment, shovels finally hitting the ground, even sweeter,” said Levien, who took over as managing general partner of the club, alongside general partner Erick Thohir, in 2012.

“Erick and I are grateful for the patience and hard work that has gone into this process, and we're proud to be a part of this important moment for the franchise, for the league, for the community and for this sport.”

Garber offered congratulations to United and their fans, noting that the team is finally moving into the home it deserves, the last of the charter MLS teams to remain in their original venue.

“It will create jobs, create opportunity, hope and development. What is now sand and dirt in a year and a half's time will be a state-of-the-art, world-class facility that's going to give Washington international exposure beyond that which it already has. It's going to be a great cathedral for our sport.”

“Audi has been a long-time supporter of soccer, and it is only right that we bring this passion home to our community in D.C. with Audi Field,” Keogh said. “We can't wait to win a title and have this great stadium open.” 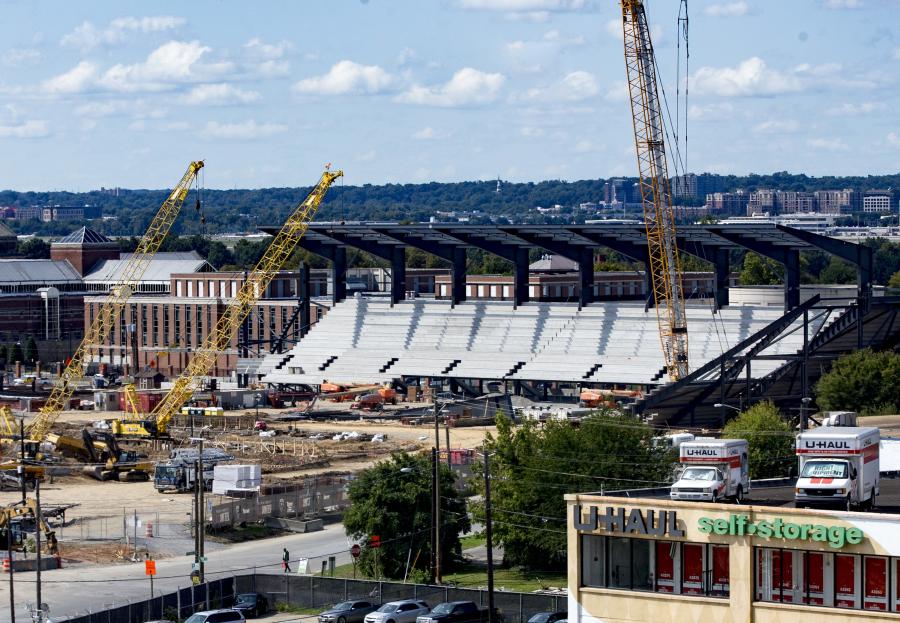 “We are currently completing the skin on the south building, including the installation of the curtainwall, storefront systems, exterior rain screen and roofing of this building,” said Troy Scott, vice-president of stadium development and operations.

“In addition, the interior masonry, framing, mechanical, electrical and plumbing work is under way on all floors in the south building, in preparation for drywall and interior finishes of this building. The exterior framing, sheathing and masonry work is ongoing at the east building, along with above ceiling mechanical, electrical and plumbing rough-in. The installation of the stormwater infiltration basins at the field and the utilities around the perimeter of the site are all well under way.”

The elements have been a concern during construction, and may continue to pose a threat.

“Weather is always a factor on a construction project, and brings challenges like high winds that restrict the ability to erect steel. Cold weather requires heating of concrete and masonry. Then rain restricts grading and excavation activities. The project planned for some potential weather impacts on the schedules, and these challenges will continue to arise and need to be evaluated by the project team.”

The site was previously a mix of multiple properties that were joined into a single plot by the District. The tear down of pre-existing structures was completed prior to crews mobilizing. The location included industrial buildings, a scrap yard and a salt dome.

“The project team was responsible for the surface demolition of the pre-existing roadways, parking lots and utilities serving the project, said Scott. “This work went well and proceeded according to plan. It was a phased demolition, allowing us to keep the roadways in use as long as possible to minimize the tracking of mud and debris onto public streets.

“The Department of General Services handled the demolition of the existing buildings. Prior to below-grade demolition, an archeological investigation occurred under the direction of the District of Columbia archeologist, and findings were documented and submitted.”

Soil remediation followed a voluntary cleanup action plan established and approved by the Department of Energy and Environment. The effort was led by D.C. United's environmental consultant, Haley and Aldrich, and consisted of subsurface testing, analysis and proper disposal of soils based on the types of contaminants discovered.

The bulk excavation work on the site was driven by the need to remove contaminated soil and to accommodate required infiltration basins. The majority of the stadium building is above grade, with the exclusion of the south building basement, which was a single-story excavation utilizing a sheeting and shoring system on two sides of the building, consisting of cantilevered H piles with lagging. 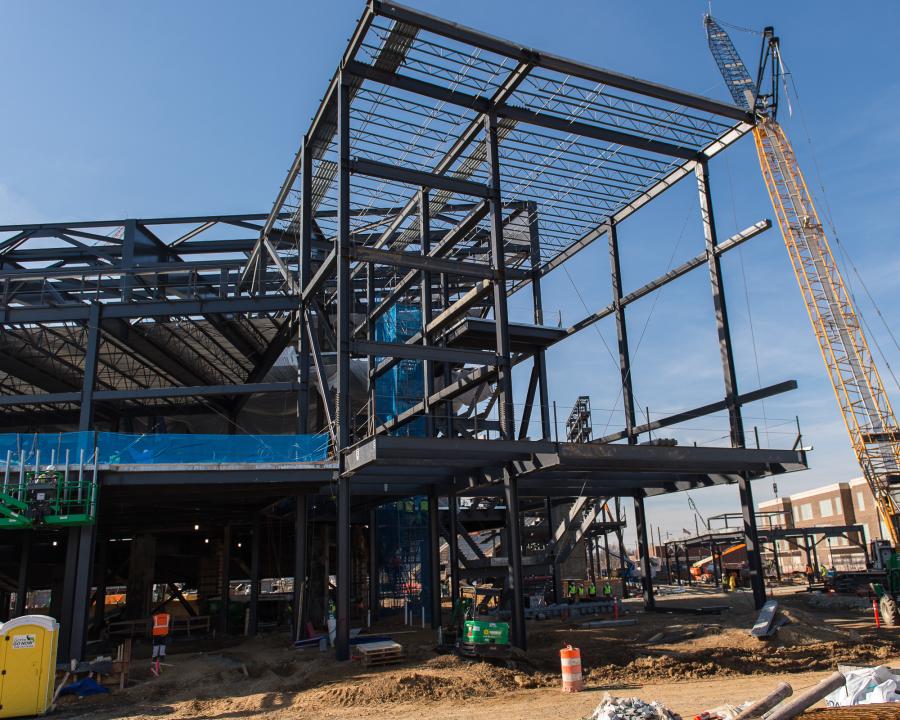 Some of the main materials being used during construction include concrete, steel, metal studs, sheathing, glass, aluminum, metal panels, railings, cement exterior panels, tiling, carpet and seats. Approximately 60,000 cu. yds. of dirt and other material is being moved on the project, where a variety of heavy machinery is on site.

Scott noted that the most time-consuming part of the work has involved coordination of the existing utilities through the easement.

For Simpson and everyone else involved in the undertaking, the long-awaited stadium is a dream come true.

“This project began in 2012, and has become a reality thanks to the support, commitment and persistence from all who have been involved throughout the various phases.”

D.C. United's inaugural game at Audi Field is scheduled for July 14 against the Vancouver Whitecaps.