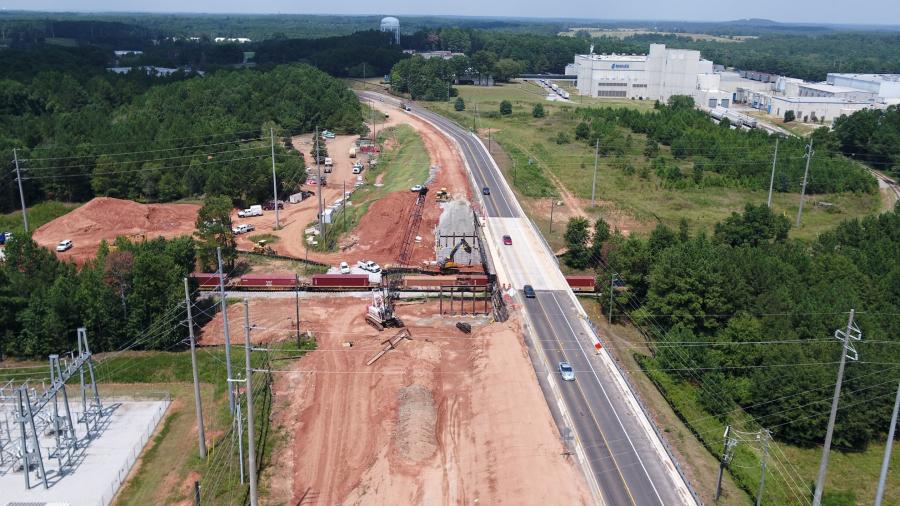 By the end of May, crews from Southeastern Site Development Inc. (SSD) will have delivered the Georgia Department of Transportation's $14 million project to widen 2.5 mi. of State Route 142 from FM I-20 to Alcovy Road in Covington, including the widening of a 112-ft. long bridge that spans mainline railroad track owned by CSX Transportation.

The construction site, located in Newton County, widened the road from one lane to two lanes in each direction. The project saw the installation of poured-in-place culverts and typical road infrastructure. The work started in December 2016. Funding for the project was provided by the state.

"This project was needed to handle the increased traffic volume and truck traffic in the area," said Robert Rowland, GDOT's assistant area manager — District 2 Area 5 construction. "By doubling the number of travel lanes, the travel times for commuters will be cut significantly. The project was in planning for five or six years prior to construction. The community supports this project since it will decrease travel times through the area."

This section of road was constructed several decades ago and, on a daily basis, carries between 15,000 and 20,000 cars and trucks. The widening plan was designed by GDOT.

The first step was to clear the trees and debris for the new lanes.

"It went very smoothly, other than having a lot of rain over the last year and working through all the wet weather was not easy — historically it was the wettest year on record," said Stokes. "It shut down our operations for several days. It would take several days for the terrain to dry and then it would rain again and you had to wait for it to dry again. This required a lot of erosion control — it was a challenging project to say the least. We put in a lot of overtime and worked on weekends to make up lost for lost days."

The areas for the new lanes and shoulders contained some of the utilities that were relocated. The excavated materials were removed rapidly.

"We then graded the lanes and shoulders, put in the pipes and other infrastructure," said Stokes, who noted that the lane had a subbase and an asphalt surface. "It took weeks to complete the new lanes and a lot of coordination with the traffic swaps, utility relocations, and demotions — all in between the rains."

Cooperation with CSX was essential.

"They had a flagman and would let us know when trains were coming through so that we could move our equipment of the right-of-way," said Stokes.

The new one-span, concrete beam bridge, with a concrete deck, is 112-ft. long. 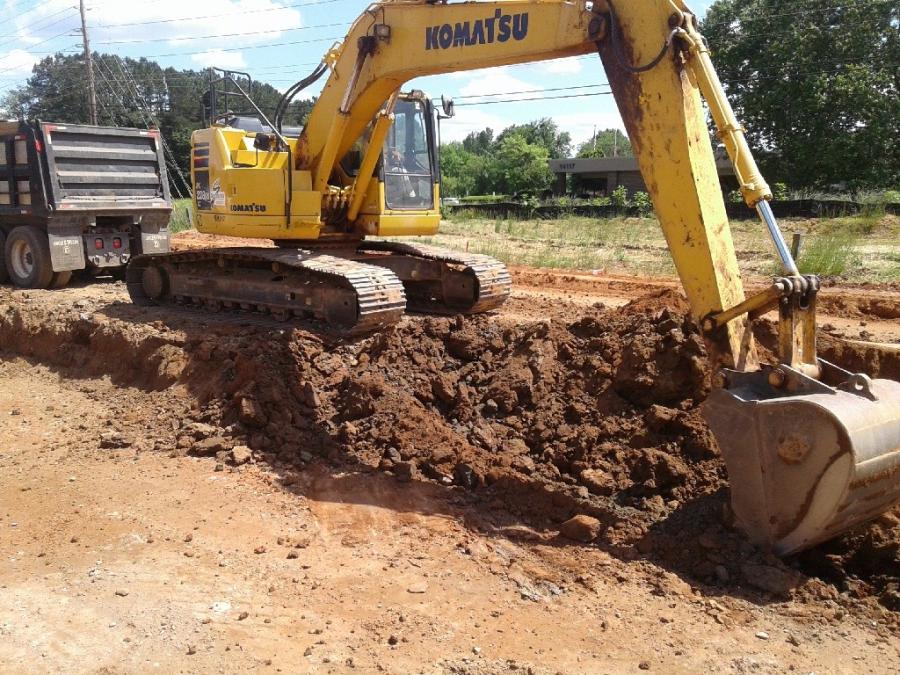 "The bridge work also went smoothly," said Stokes. "We had a lot of retaining wall (MSE) to build — one on each side. We had to coordinate that with CSX so that we could drive our piles, build the walls, pour the concrete caps, and set the beams. Railways are tough to work with — they're inflexible and it's their right-of-way. The biggest problem was demolishing the old bridge over live track. The deck was sawed in sections and the false decking caught all the debris. We ran hooks through each sawed section, put a hole in it, and picked up each slab."

The new drainage infrastructure was installed as the road sections was constructed.

"They have a great team dynamic and have worked together on previous projects" said Scott Stokes. "The crew have put in a lot of hard work into getting the project completed.

Peak days had between 15-to-20 SSD and subcontractor personnel on-site, with the major subcontractors being Adams Clearing for clearing and grubbing, Moye Electric for traffic signals, EFS for erosion control, Jake Martin and Son for grassing, E.R. Snell for asphalt paving, and Bly, Bly, Pittman for concrete flatwork.

Materials removed included concrete, asphalt, steel, and earth and rock. The asphalt was recycled and the other materials were hauled to recycling centers. Materials brought in include: 200 cu. yds. of concrete, 120,000 lbs. of steel, 10,000 tons of asphalt and 70,000 cu. yds. of earth.

Much of the company's fleet consists of newer models. When repairs are needed, mobile mechanics visit the work site.

"Routine maintenance is crucial — making sure your cutting edges are turned, cleaning your filters daily, keeping the tracks cleaned, and doing TMs on your oils and lubes," said Stokes. "We had some issues with maintenance five or six years ago and we got them cleaned up. We make sure that we have folks keep the tracks greased. You just have to make maintenance a part of your daily culture."

SSD purchases and rents equipment from dealerships such as Tractor Equipment Company (TEC, for Komatsu) in Covington, Yancey Bros. Co. for Cat machinery, and Flood Equipment for some pieces.

"TEC and Yancey Bros. are our two primary sources of equipment — the majority of our fleet os Komatsu and CAT said Stokes. "A lot of times we'll have them do preventative maintenance and they come out into the field to get tractors and other equipment running in a timely fashion. There are certain things our mechanics can't do and the dealerships really help us out to maximize performance."

To deliver the project, crews from Southeastern Site Development have to complete the following: pour a few driveways, take care of various punch list items and switch traffic over to the final alignment of the railway bridge.

"The relocation of utilities was a major hurdle and traffic switches were also a challenge," said Scott Stokes, SSD's owner and president. "For the bridge over the railway we had to split the work into two phases, but we worked through that and got it done. Good coordination with GDOT was important and issues could be resolved quickly, and a couple of days at most for some that arose. We used GDOT's traffic control plan to bring materials in and out of the job site." 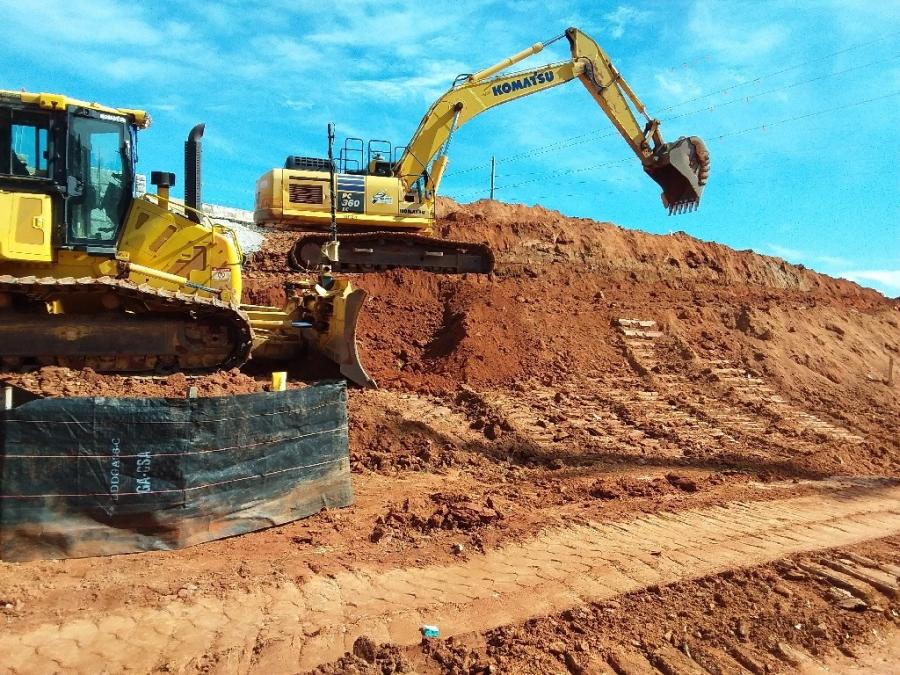 "It took about one-and-a-half years to get them all removed and they had their own crews do the work," said Scott Stokes, SSD's owner and president. "We tried to work around the utilities where we could and resolve any conflicts as they were removing utilities. You have your disputes, but for the most part everybody was cooperative."

The new lanes were built on either side of the existing two lanes. The widened highway now has a concrete median separating the two directions.

The road construction began in late August/early September 2017. The first part of the job required the westbound lanes and half of Alcovy Road going north, and following a traffic switch in 2018 when these sections were completed, crews started to work on the eastbound lane and the southern half of Alcovy.

"It was the same for the bridge," said Stokes. "We switched traffic, did half of the bridge, took out the old bridge and built the new bridge. For the road work, we had to take out the turning lanes going into Alcovy Road, but for the most part we didn't close anything."

The plan saw the new lanes (located on green fields) constructed first and then crews tore out the existing lanes and rebuilt them. Each side was split into halves so that traffic could use part of the road. CEG