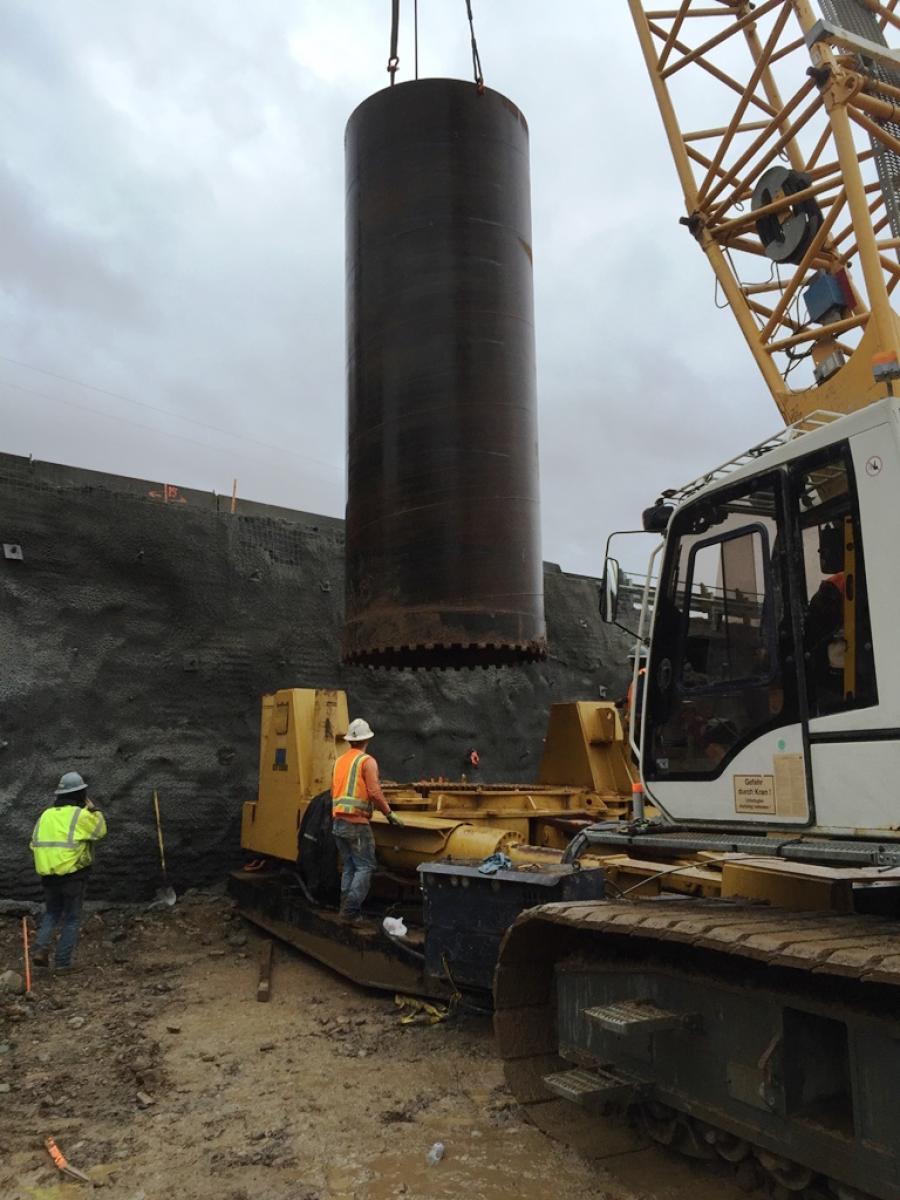 Montana's $13.5 million Cabinet Gorge Replacement Project is progressing despite discovery of a huge boulder obstruction by workers drilling under the Columbia River that slowed foundation work on the bridge that will cross the Clark Fork of the river in Sanders County, Mont.

The project, also known as the Heron Bridge Replacement, features a new, sturdier bridge on Heron Road. The bridge site is located about 1.5 mi. (2.4 km) south of Montana state Route 200 and 3.6 mi. (5.8 km) east of the Montana-Idaho state line.

The bridge will provide an improved connection to the town of Heron, 3 mi. (4.9 km) from the Idaho border.

The existing bridge will remain in place until the new bridge is ready for traffic, then the old bridge will be taken down.

“The narrow section of the bridge contributed to lateral instability challenges that had to be addressed through design and are uncommon in steel structures of this span length,” said Robert Vosen, construction engineer for Missoula District, Montana Department of Transportation.

Foundation work for the bridge was under way when crews encountered one or two boulders at a depth of about 60 ft. (18 m) below the water surface near the south upstream river pier. Thickness of the obstruction varied from 12 ft. (3.7 m) to 26 ft. (8 m), making shaft drilling impossible at the location.

The construction team worked out a plan to avoid the unexpected obstruction so a deep foundation could be installed.

“A large 25-foot-plus boulder was encountered when working on the planned eight-foot drilled shaft,” Vosen said. “Additional boulders were also found. The obstruction problem was resolved with a re-design and a new work method was implemented.”

Vosen added, “Seven 16-inch diameter macro-piles are now being installed. Each pile is approximately 190 feet in length. The macro-pile will be filled with rebar and grout.”

The length in delay of project work caused by the huge boulder was still under evaluation in December 2016, but work was proceeding.

Contractor for the new bridge project is Dick Anderson Construction of Helena, Mont. Selected as low bidder for the work, the company is a general contractor and construction management company with 40 years of experience with commercial, civil, industrial, residential, energy and bridge projects.

The number of workers on the job will vary during the project, but currently about seven are on duty each day including laborers and equipment operators.

“These numbers will likely increase when work on the superstructure begins in the spring and summer,” Vosen said.

Crews building the bridge will construct two 12-ft. -wide lanes for crossing on a roadway with a 30-ft. (9 m) curb to curb width.

Besides having a wider roadway, the new bridge will be built to handle heavier vehicles. It will not be load restricted, allowing legal loads to cross safely.

It also will provide a crossing that will have a long useful life compared to the existing bridge that is reaching the end of its functional life.

“With a wider and non-load restricted bridge at this location traffic is likely to increase, which could provide an economic advantage to the community of Heron on the other side of the bridge,” Vosen said.

He said bridge foundation work has resumed and workers are currently in the process of drilling and installing the third of seven 16-in. (40.6 cm) diameter rotary drilled steel pipe piles inside of an 8-ft. (2.4 m) diameter steel casing.

Additional soil will be needed to create grade for the new bridge.

The original Cabinet Gorge Reservoir Bridge was constructed in 1952. As a truss bridge it has increased maintenance and inspection costs compared to the new steel girder bridge replacing it.

The bridge is posted with a 12-ton (11 t) load limit and has only a single lane.

The Columbia River's 310-mi. (499 km)-long Clark Fork is crossed by only two other bridges in the general area of the Cabinet Gorge Bridge.

One is located in the town of Noxon, Mont., and is a three span through truss bridge built in 1922. It is approximately 13 mi. (21 km) upstream and southeast of the Cabinet Gorge (Heron) Bridge.

Downstream travelers will find a bridge crossing the Clark Fork near the town of Clark Fork, Idaho, approximately 12 mi. (19 km) to the northwest.

So with few crossings in the area and other bridges aging, the new Cabinet Gorge Bridge will be an important crossing that is designed to last.

Many more bridges can be found upstream crossing Clark Fork in Montana. But they are some distance from Cabinet Gorge.

The Columbia River is the largest river by volume in Montana. It drains an extensive region of the Rocky Mountains in western Montana and northern Idaho in the watershed of the Columbia River.

The river flows northwest through a long valley at the base of the Cabinet Mountains and empties into Lake Pend Oreille in the Idaho Panhandle. The Clark Fork is a Class I river for recreational purposes in Montana from Warm Springs Creek to the Idaho border.—CEG