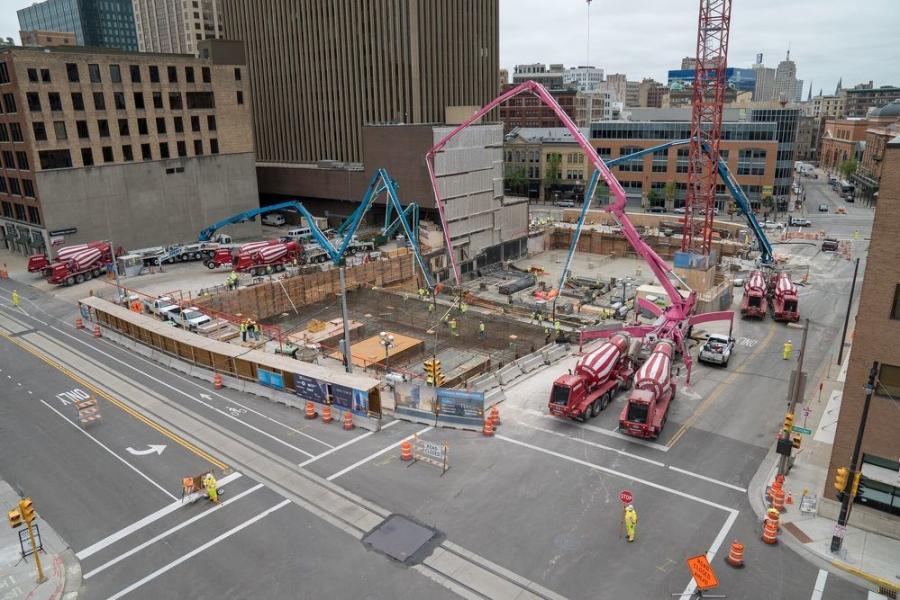 Findorff is using a Potain MDT 368A top-slewing crane and a Manitowoc self-erecting T-130 crane to assist in the concrete-related activities.

With meticulous planning, crews from J.H. Findorff and Son Inc. and Ozinga Bros., the concrete supplier, successfully poured close to 6,700 cu. yd. of concrete for the foundation of the new Irgens Partners BMO Harris Tower in Milwaukee, Wis., on June 2.

The operation, regarded as the 25-hour pour, was completed in 19 hours without any concrete lost in the transportation or pouring processes. Construction for the 25-story tower (including the parking podium), designed by Kahler Slater, a Milwaukee-based architectural firm, began in November 2017 and should be completed in November 2019.

The ground breaking took place in November, with operations focused on the replacement of a parking garage across the street from city hall on Wells Street. Following a winter break, crews set up a 280-ft. tall crane last April to help with the tower construction.

The concrete pour is considered to be one of the largest continuous operations in Wisconsin's history, which involved more than 600 deliveries from three production plants.

Prior to the pour, in April, Ozinga supplied concrete to install a crane pad and for soil stabilization. 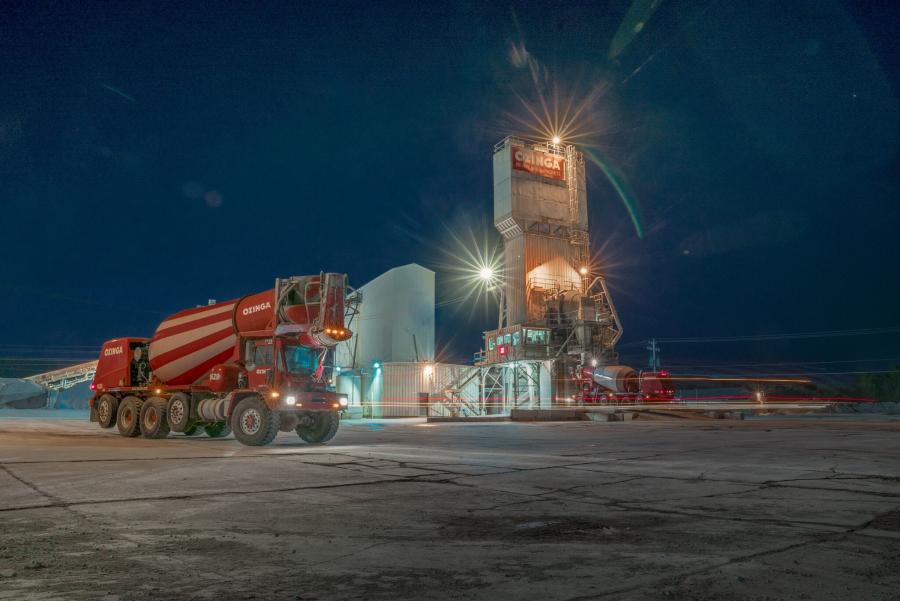 The pour started at midnight, but the intensive planning began weeks earlier.

“We had multiple meetings over the past four weeks organizing, setting it up and making sure that we had a flawless plan to execute the demand and schedule that they had set forth, so that in case of an emergency, it was covered,” said Ritch Dembinsky, executive vice president of Ozinga's Wisconsin operation. “Once we started, we couldn't stop the pour. We had to continue it and finish it a timely manner. This was the largest continuous project that we've done in Wisconsin.”

The first half of the pour had 50 ready mix trucks in service, with 35 making deliveries in the second half, along with several trucks in reserve to ensure a constant flow of concrete. Each truck could make the round trip in under an hour and reload for another run.

The three Rex central mix batch plants were set up in two locations, about 11 minutes away from the construction site.

“We had more capacity than the job needed,” said Dembinsky, “but if we had a problem with one of plants, we wouldn't miss a beat. The pour was a continuous mass concrete placement with a portion of it being over 6 feet in depth. Findorff outlined the placement method and sequence with our team. The mix design was proportioned to accommodate the placement, sequence and technical requirements based on project specifications and input from the Findorff team. On the day of the placement, we were able to deliver without interruption and adjust accordingly as site conditions warranted.

“We were producing anywhere between 400 to 500 cubic yards per-hour in the peak hours,” he added. “We had the capacity to do over 800 cubic yards an hour.”

Traffic patterns were studied in advance so the dispatch team and drivers knew what they would encounter, and the city of Milwaukee informed residents of the pour and the areas where the trucks would be passing through.

“We had different constraints such as construction going at night,” said Dembinsky. “We had two trucks at each pump and anywhere from four to 16 staging, getting ready to pour as fast as possible. We would have them lined up and ready to go with the next open pump. The trucks could be unloaded in 3.5 to 7.5 minutes depending on the pump and what they were doing at the time.

“There were no rejected loads on the whole job,” he added. “Everyone did an outstanding job — from Findorff's team through our team, which did a great job with the planning, quality control, batching and timing. The quality control team did an excellent job with consistency of the concrete over the entire pour. We felt that we were in pretty good shape going into it and at the end of the pour we stood tall as our plan followed through perfectly.”

“Some of the streets experienced construction work and traffic patterns as well as staging sites changed on us during the pour,” said Dembinsky, “and we had to communicate that to the drivers and dispatch team so that there were no delays. They started adjusting the pour rates as they got towards the end; it was slowing down and we needed to know exactly how much more concrete was needed to complete the mat slab.”

While the movement of the trucks was GPS tracked, due to the proximity of the work site and changes in traffic, direct communication was the most efficient way to keep the operation moving.

“In 10 minutes we could load 100 cubic yards,” said Dembinsky, “so every minute was critical. If any issue arose, we wanted to be sure that we wouldn't be too far behind or ahead of the project.”

Because of the size of the Ozinga Wisconsin team, the company did not need to subcontract equipment or personnel for the pour, according to Dembinsky.

“That's how we were able to control the project for quality and safety,” he added. “Everyone was on board with our training, techniques, processes, and equipment. We did not cut corners, even when it meant trying to feather in a second shift and keep the flow going without any interruptions. We did everything safely and by the book, and we proved that you can do it that way and still be successful — that you don't have to cut corners and exceed hour limitations.” 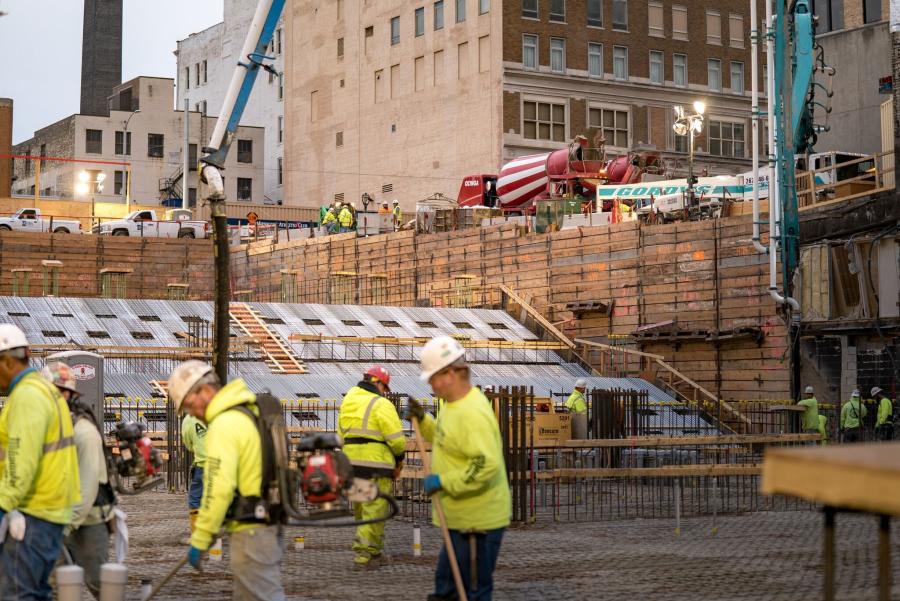 Ozinga had more than 100 personnel assigned to the project.

A week before the work, a joint safety meeting was held with all the Ozinga and Findorff management assigned to the project. This ensured that everyone was aware of the potential issues, safety regulations and what was expected at the job site. Everyone had an opportunity to ask questions, which helped to eliminate unforeseen situations.

The plan for the tower construction will see the installation of the superstructure/steel on floors 10-25.

“The plan and work schedule for all activities have been discussed and reviewed over a period of months, enabling the team to accurately identify activity durations and prepare for various contingency plans,” said John Kaltenberg, Findorff's project manager. “The parking structure demolition, mat slab placement, podium completion, tower superstructure completion and glazing completion are all major benchmarks.”

Findorff is using a Potain MDT 368A top-slewing crane and a Manitowoc self-erecting T-130 crane to assist in the concrete-related activities, both of which have been provided by ALL Tower Crane LLC. Various demolition and earthwork pieces of equipment were also used.

“From the field to the office, each group of Findorff's team has been very excited to work on this signature project,” he said. “Major accomplishments, such as the recent noteworthy mat pour, are not frequent in an individual's career, and our teams take pride in being involved in such activities. Each person that works on the job is excited to say 'I worked on that building' in the future, and everyone is thrilled to have been involved in the ongoing progression of the city and its enhanced skyline.”

The law firm of Michael Best & Friedrich will occupy half of the building, with BMO Harris Bank leasing several floors.