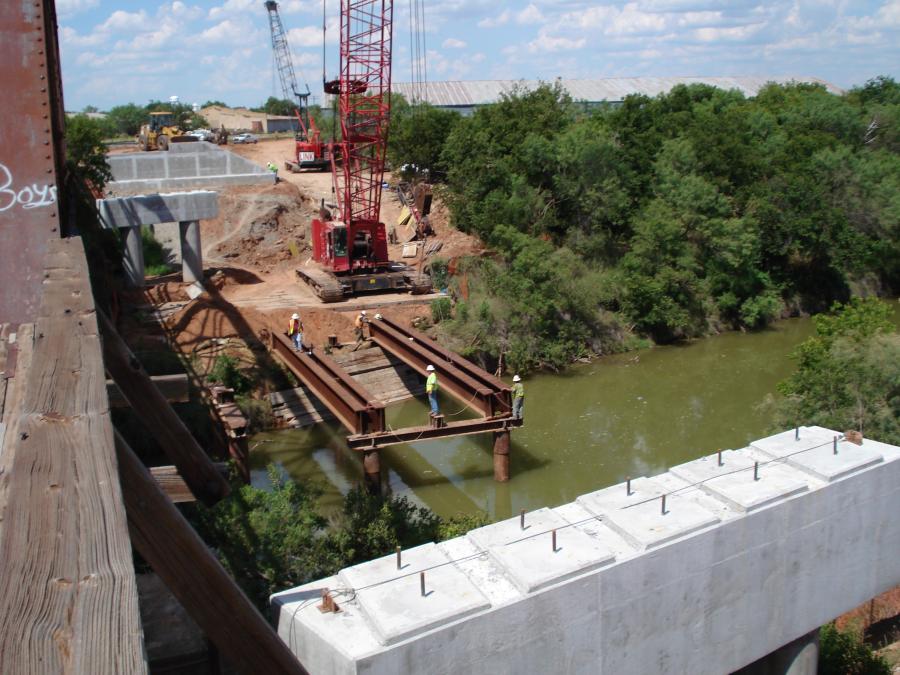 “This is part of the ongoing rehabilitation of the entire rail line, and is necessary to allow us to respond to growing freight demand along with continued economic development and safe, efficient rail operations on the route,” said Marc Williams, deputy executive director of the Texas Department of Transportation (TxDOT).

“The South Orient Railroad supports the agriculture and oil and gas industry in the region, and is an important investment in the vitality of the West Texas economy.” 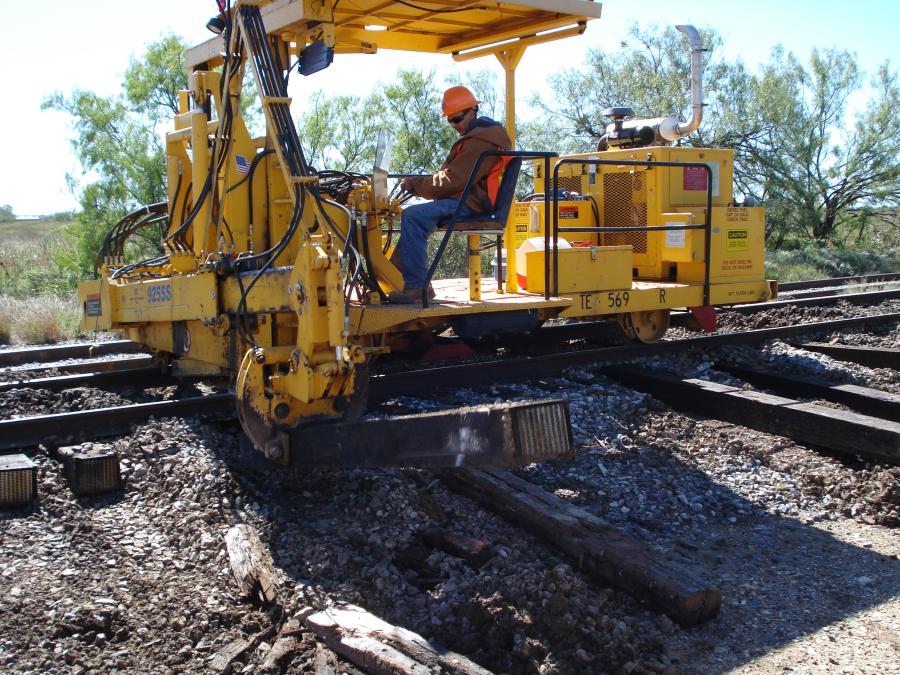 The current project began in October 2017 and is nearing completion. The much-needed improvements on the freight line are considered critical to the region's future, and are being made at an opportune time. Work on the line comes when yearly carload counts have increased by nearly 300 percent over the past five years.

“When the rehabilitation of the rail line began late in 2009, the railroad employed eight people and served 12 customers, most of which were seasonal services related to the agricultural industry,” said Williams. “Annual carloads averaged 2,031 from 2000 to 2009. Since the rail line efficiencies have improved, the railroad now employs 63 people and services 30 shipper locations. For 2017, carloads totaled 43,737.”

Shipments due to oil and gas exploration in the region continued to make up the largest share of traffic on the line in 2016. This traffic continued to climb, even with reduced prices for hydrocarbons. Inbound sand received registered over 3,000 carloads more than the previous year. Crude oil shipments totaled 1,040 carloads for 2016, an increase of 624 compared to 2015. The total carloads interchanged were 30,565, which is an 18 percent increase from the previous year. Wheat shipments totaled 1,369 carloads, up 44 percent.

The $9.5 million provided for the project will help rebuild the section of infrastructure that officials believe can play a vital role in the economic development of the state. Williams said receiving federal dollars is crucial.

“The majority of TxDOT's funding comes from fuel taxes. The Texas constitution limits fuel tax funds to highway projects. This is a unique opportunity to further strengthen our transportation infrastructure.”

In addition to the current track rebuilding, work is planned to reconstruct the Presidio-Ojinaga International Rail Bridge, which was destroyed a decade ago. One of five border rail crossings between Texas and Mexico, it has remained closed. The $9.2 million cost of construction for the new bridge is being provided by the operators of the state-owned rail line.

“The bridge will be reconstructed by Texas Pacifico,” said Williams. “Construction should begin in late 2018 or early 2019. The cause of the fire was determined to be arson. There was no immediate impact, since no freight had moved over the bridge for years, due to the poor track conditions along the line.”

Williams also noted that TXPF is coordinating with the connecting railroad in Mexico, Ferromex and governmental agencies in Mexico, as some construction and repairs must be done on that side in order to have complete connectivity between the two countries' rail systems. The details, however, are unclear at this time. 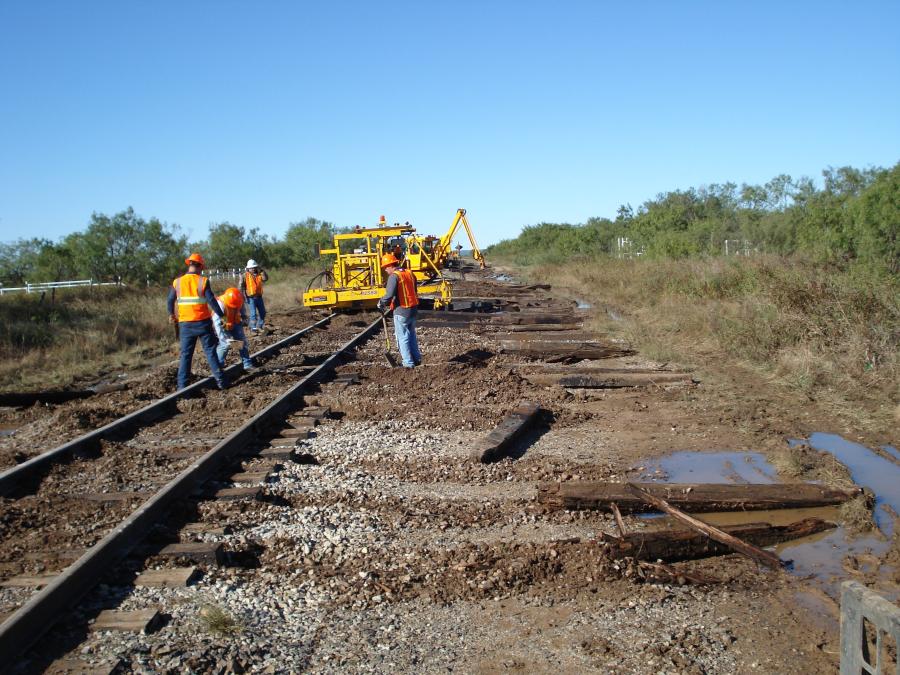 For the rehab work, crews are replacing cross ties, installing ballast, surfacing track and reconstructing grade crossings. All of these tasks are ongoing. The most time-consuming part of the job involves tamping the track to the specified alignment and profile grades.

Gil Wilson, rail programs section director, TxDOT rail division, said the condition of the site prior to construction was challenging.

“It was an existing railroad line with defective, inoperable components. The work that includes the most site impact is the reconstruction of the grade crossings, including removing existing crossing, excavating soil to subgrade and reconstruction.

According to Wilson, crossing excavation depth can vary somewhat from location to location.

“The site is excavated down to the 'hard pan' where previous compaction and consolidation of fine materials over time has created a rigid surface to reconstruct the crossing on.”

To date, weather has not affected the project, which is considered somewhat monotonous, but necessary.

“This is routine railroad rehabilitation work,” Wilson acknowledged. “The challenges are minimal.”

A total of 770 sq. yds. of dirt and other material will be moved by crews, who are primarily using a tie remover and inserter, spiker, tamper, regulator, backhoe and grapple truck to complete the various tasks required to complete the assignment. Some of the main materials used during construction include cross ties, grade crossing panels, rails and ballasts.

Texas Transportation Commissioner Tryon Lewis joined with county, state and other officials for a rail spike-driving event to celebrate the federally-funded projects to rebuild the stretch of track. The event, hosted by the San Angelo Railway Museum, featured hammers and golden spikes. Local stakeholders and elected officials were given the opportunity to celebrate the next phase of rehabilitation work occurring on the line, and also comment on the remarkable growth in traffic occurring on the line.

“The improvements that are being made to the rail line and the reconstruction of the rail bridge will provide future support for the communities and industries in Texas that rely on deliveries provided by the South Orient Railroad,” said Commissioner Lewis.

“Rebuilding the South Orient Rail Line will restore a critical corridor of trade between Texas and our state's strongest trade partner,” said U.S. Senator John Cornyn. “I'm proud to have worked with TxDOT, USDOT, and my colleagues in Congress to help strengthen cross-border commerce and improve the flow of legitimate trade with Mexico.”

U.S. Congressman Will Hurd, who represents more than 800 mi. of border, more than any other member of Congress, added, “Cross-border trade is the lifeblood of many areas in my district. I'm proud to have worked with TxDOT to secure funding for the South Orient Rail Line, so that this vital corridor can remain a pillar of Texas trade, benefiting the border region, West Texas and our state's economy.”

The South Orient Railroad (SORR) is a TxDOT-owned rail facility, roughly 391 mi. in length. SORR extends from San Angelo Junction through San Angelo to Presidio at the Texas/Mexico border. In 2001, TxDOT completed the purchase of the SORR and leased operations to Texas Pacifico Transportation. Under the terms of the agreement, TxDOT became the railroad's permanent owner, and Texas Pacifico obtained a 40-year operating lease with renewal options.

At the time of purchase, train speeds on the SORR were restricted to 10 mph as a result of deferred maintenance by the prior owners, which caused deterioration of the infrastructure. The SORR has one of five rail-border crossings between Texas and Mexico, and one of eight between the United States and Mexico. TxDOT has completed the rehabilitation of 114 miles of the line from San Angelo Junction (near Coleman) to west of Mertzon through several rehabilitation projects which began in the fall of 2009.

The projects are in addition to a $7 million rehabilitation of 72 mi. of track from the Texas-Mexico border to Alpine funded by a federal FASTLANE grant. 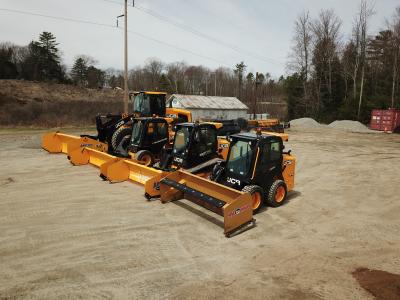