The number of vehicles crossing the old bridge has increased each year since it was built in 1965. 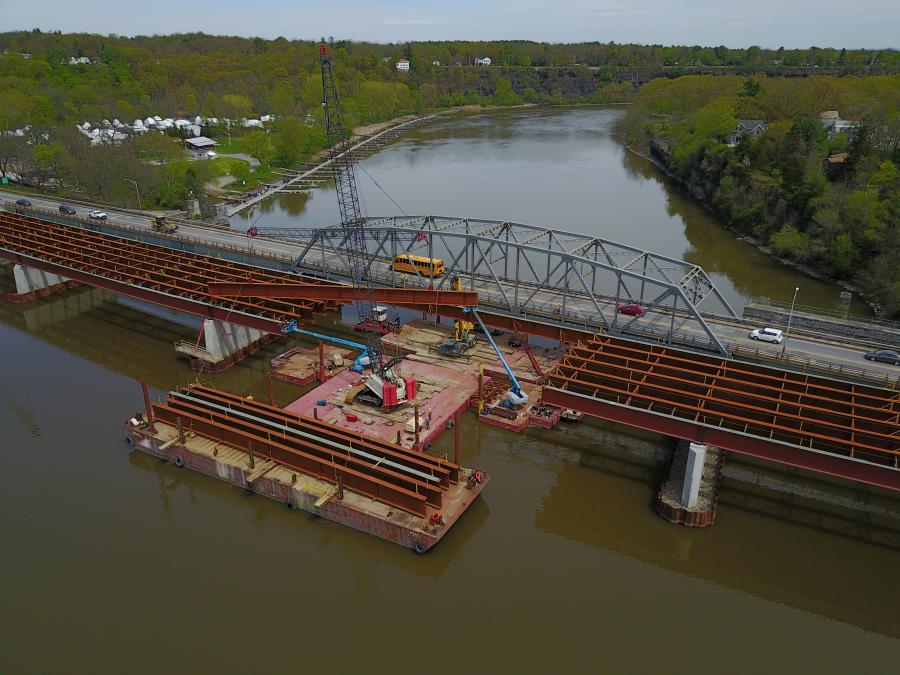 The new $32.5 replacement for the current 52-year-old Rexford Bridge stretches across a narrow point on the Mohawk, while connecting motorists traveling state Route 146. (NYSDOT photo)

A sleek new 772-ft.-long-bridge is in the finishing stages of construction across the Mohawk River just to the northeast of Schenectady, N.Y. When it is opened to traffic later this summer, it promises to add much-needed capacity across a heavily-traveled commuter route.

In addition, the new Rexford Bridge's elegant and unobtrusive design will be an accent to the natural beauty surrounding that point in the river valley.

The new $32.5 replacement for the current 52-year-old Rexford Bridge stretches across a narrow point on the Mohawk, while connecting motorists traveling state Route 146 between the small towns of Niskayuna in Schenectady County and Clifton Park in Saratoga County.

The four-lane bridge — two in each direction — also will include a multi-use path that follows Route 146 and connects Riverview Road to the north with the Mohawk-Hudson Bike-Hike Trail on the south end of the new structure.

Work has been progressing very well since the late summer of 2015 and according to one construction official, vehicles should be moving across the new Rexford Bridge by late July or early August. The new bridge lies just feet to the west of the existing two-lane structure.

The number of vehicles crossing the old bridge has increased each year since it was built in 1965, to the point that today, an average of about 22,000 traverse the span each working day, according to the New York State DOT.

As it is only a two-lane bridge, traffic can understandably become quite congested during the daily rush hours as commuters move in and out of the Schenectady area. Many of them live in the Clifton Park area and work in the larger city to the south.

The old Rexford Bridge is also rapidly reaching the end of its functional life, making safety an issue for motorists, according to the New York State DOT.

“Overall, they have taken good care of the old bridge,” said Mike Dillon of Herkimer, N.Y.-based Tioga Construction Co. and the project manager for the new Rexford Bridge. “The steel on the structure seems to be in pretty good shape, but the deck is in poor condition. The big reason for replacing it, though, was to be able to add capacity.”

The often-long lines of traffic and the age of the old bridge concerned local residents, business owners and politicians so much that calls to Albany for a replacement span became louder each of the last several years.

Finally, New York Gov. Andrew Cuomo announced in August 2015 that a new Rexford Bridge would be built as a design-build project and that the contract would be awarded to Tioga and AECOM, a global design firm with an office in Manhattan.

“The safety improvements and structural upgrades to this bridge will help ease congestion while also ensuring its continued viability for years to come,” Gov. Cuomo said in March on the NYSDOT website.

Calling the Rexford Bridge “a vital link for commuters and visitors” to the region, the Governor also stressed the importance of getting the bridge opened as soon as possible. For that reason, the decision was made by the NYSDOT to make this a design-build and thereby save money and shorten the time frame for getting the project completed.

After being awarded the project two years ago, Dillon said that Tioga began the initial stages of construction by going through the design, permitting and utility relocation plans. By the late fall of 2015, they were clearing trees so the utility relocation could begin.

His firm and its subcontractors then began working on about a mile of roadwork along Route 146 and built a traffic roundabout on the south side of the bridge near the village of Niskayuna.

“We opened the roundabout last fall and that seems to have alleviated some of the traffic tie-ups, but it is only striped now as a single-lane roundabout leading to the old bridge,” Dillon added. “Once the new bridge is done, we will restripe the roundabout to two lanes as it feeds traffic onto the bridge heading north.”

Tioga's crews, including subs, has numbered between 30 to 45 people, he said. They quickly and efficiently moved the project along throughout 2016, with the goal of completing all the substructure concrete work on the river before winter.

“One of the machines we used was a Caterpillar 330 excavator with a long stick for cleaning out cofferdams during the substructure construction,” he explained. “For the abutment excavation, we used both a Kobelco SK330 and SK350. We also brought in an ICE I-19 diesel pile hammer for abutment H-pile installation. Two of the three piers are on bedrock and the sheet pile cofferdams were installed with an ICE 416 vibratory hammer.”

One of Tioga's subcontractors, HUB Foundation, a Massachusetts-based specialist in drilling shafts, worked on the third pier using its own Soilmec R-825 drilling rig.

All that work was finished on time last fall before the Mohawk Valley's usual brutal cold moved in, Dillon said.

“The river we are crossing gets pretty icy and windy, so we waited until this spring to do the steel erection, after the flooding subsided,” he admitted. “The Mohawk jams up with ice and it drains a large area of the state. So, we had to wait for warmer weather as ice obviously makes it unsafe to use barges with cranes in the winter.”

Once the new Rexford Bridge's 49 steel girders, each 140 feet long, began arriving in the early spring, Dillon and his crews got right to work on April 10 setting them in place.

The girders were manufactured by High Steel Structures in Lancaster, Pa.

Tioga owns each of those pieces, but also relied heavily on a rented 250-ton Link-Belt 298 HSL to erect the girders.

Most of the steel was set in place by Tioga from several company-owned or rented 7-ft.-depth Flexi Floats, Dillon added.

That part of the work was done by May 15, allowing Tioga to then move on to the current task of pouring the road deck and finishing the roadway leading to the bridge.

Most of the road improvements on either side of the bridge have involved widening Route 146 and replacing old culverts.

Looking to the Future

The road will remain two lanes until it approaches the bridge project on both its north and south sides, but the hope is that four lanes across the river overpass will keep vehicles moving more efficiently at what is a critical area chokepoint.

Dillon said that all the road improvements being made are with future traffic capacity in mind as the towns of Clifton Park and Niskayuna are growing at a rapid pace.

When cars and trucks are cleared to travel over the new Rexford Bridge, Dillon said that the demolition will begin, most likely in August. He estimates that his firm can complete the task in 2.5 to three months, with the last part of the work being the removal of the old substructures.

The entire project should be finished late this fall, according to the NYSDOT.