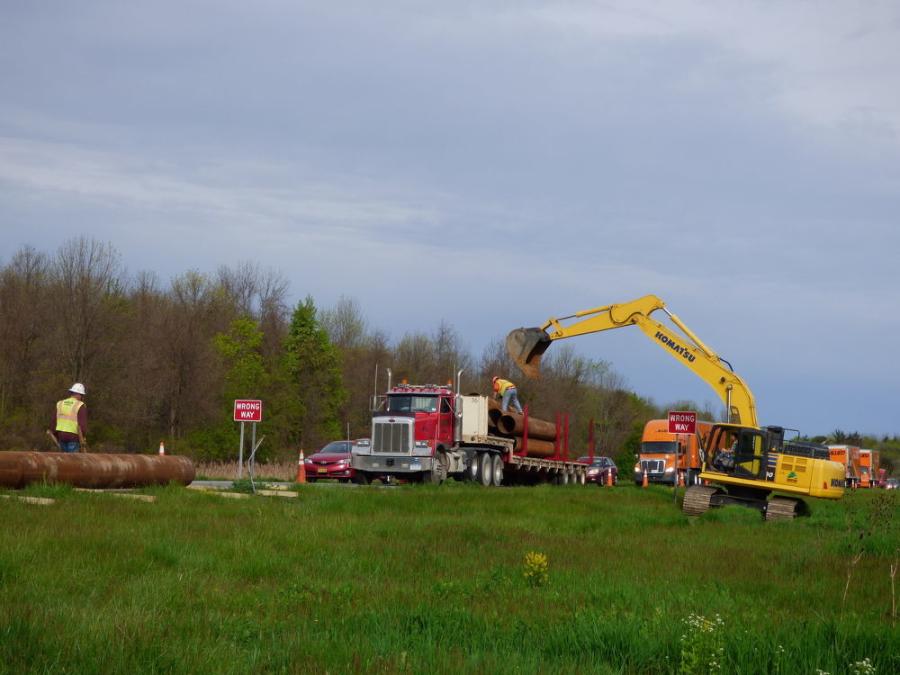 NYSDOT owns right-of-way along Route 31, with room to implement an environmental enhancement as part of the assignment. (NYSDOT photo)

Construction crews in New York State are continuing work on a $14 million project to upgrade the junction of Route 531 and Route 36 in the towns of Ogden and Sweden in Monroe County. The assignment, which includes modifications to nearby Route 31, is aimed at easing traffic flow and improving safety where the Route 531 expressway ends at Route 36.

“The primary reasons for reconstructing the terminus of the Route 531 expressway at Route 36 [Washington Street], is to improve highway safety, mobility and the condition of our highway system in an important east-west corridor in western Monroe County,” said New York Department of Transportation (NYSDOT) spokesperson Lori Maher. “The realigned interchange and corridor improvements will move people and goods more efficiently through the corridor.”

The reconstruction project is considered critical to the economic vitality of Monroe County and the success of the Finger Lakes Forward strategy. Making significant improvements to roads connecting businesses and communities throughout the region allows the state to continue supporting tourism, agricultural and manufacturing industries across the region.

“Finger Lakes Forward is the region's comprehensive blueprint to generate robust economic growth and community development,” said Maher. “The state has already invested more than $3.4 billion in the region since 2012 to lay the groundwork for the plan, investing in key industries, including photonics, agriculture and food production and advanced manufacturing.

“Together, these roadways serve as vital connections between Orleans/western Monroe counties and the urban interstate system through Rochester, N.Y. The strong tourism, agriculture and manufacturing industries in Orleans County provide employment and the movement of goods. SUNY Brockport in western Monroe County has helped businesses invest in the regional economy.”

The tourism industry in Orleans County includes sport fishing, and historic villages dotted along the Erie Canal. A highlight of the agriculture and manufacturing industry is the first ethanol plant in the northeast constructed in Medina. The $90 million facility processes roughly 20 million bushels of corn into fuel grade ethanol, grains and crude corn oil. In addition, Rochester Tech Park, situated adjacent to Route 531, is one of the largest multi-use complexes in the nation, with four million square feet of office, research, distribution, industrial and manufacturing space housing tenants, including major national and multi-national companies.

When construction is completed, travel will be more efficient through the signalized intersection at Route 531 and Route 36. A direct connection from Route 531 to Route 31 will be built just south of existing Route 31, along the eastbound on-ramp to Route 531. Route 531 will connect directly to Route 31 (Brockport-Spencerport Road) and will transition from a four-lane expressway to a two-lane rural arterial west of Route 36.

Road improvements include widening Route 31 from the intersection of Route 531 to just east of Gallup Road, as well as adding a center median to separate the eastbound and westbound travel lanes. Crews also will transform a section of Route 31 between Route 531 and Route 36 into a cul-de-sac roughly 2,000 ft. west of Route 36, in order to provide access to the residential homes located on the north side of Route 31. They also will build a continuous two-way left turn lane on Route 31 from Gallup Road west towards Salmon Creek Road.

The project will be completed in two phases. The first phase, which is currently under way, will take place at the interchange of Route 531 and Route 36. The Route 31 eastbound entrance ramp to Route 531 is closed during construction and a short section of Route 36 is closed between Route 531 and Colby Street while the highway is excavated and the hill is lowered. Traffic on Route 36 is detoured using Route 31, Route 259, Route 260 and Colby Street during the construction season.

The second phase, taking place in 2018, will include reconstructing and widening the roadway from west of Salmon Creek Road to the existing Route 531 eastbound on-ramp along Route 31.

In keeping with an initiative to minimize construction impacts to the traveling public, early completion incentives and date restrictions have been incorporated into the project to keep traffic moving throughout the busy Route 31 corridor.

Maher said now is the right time to carry out the work.

“The project has recently gone through the full project development process including the planning, design [environmental and engineering work] phase and is on the capital program. It's good timing, as the communities to the west continue to grow and play a key role in the area's economic activity.”

Said Maher, “Most traditional projects are simple highway or bridge reconstruction projects or preventive maintenance-type jobs. This one includes a significant change to the travel route for motorists and will result in an improved experience, especially as they transition from the urban expressway system in Rochester toward regular two-lane highways leading into smaller towns and villages to the west.”

The existing intersection had essentially three-and-a-half legs, with the western approach serving as a one-way access ramp to the Route 531 expressway facility. Many drivers had to negotiate two right-angle turns at two signalized intersections, but that will no longer be necessary.

“Once this project is complete in fall of 2018, the intersection will consist of four legs. Motorists will be able to continue in both directions between Route 531 and Route 31 at a wider, channelized, signalized intersection.”

As for feedback from motorists, said Maher, “The public was very engaged throughout the design process, and became well-informed of the intent of the project. The feedback so far has been that traffic is moving surprisingly well through the work zone, considering the amount of traffic.

“NYSDOT has gone to great lengths to develop the traffic control plan to keep traffic moving and travel impacts to a minimum, but to provide a work zone that is safe for both motorists and construction workers.”

The project is a combination of both federal and state funds. The work will be extensive, but early completion incentives and date restrictions have been incorporated to keep traffic moving throughout the busy Route 31 corridor. Work first started in May 2017. Construction will finish in November, then resume in spring of 2018.

Crews are working on the first phase, which is focusing on the intersection of Rt 531/36 and other highway work along Rt. 31.

“It's being done in phases to best maintain traffic,” said Maher. “The first phase involves work on the four legs of the Route 36/531 intersection including the new westbound connection to Route 31, utility relocation work and starting the widening work to realign Route 31 along the west end of the project limits. Next year, during Phase 2, work will focus on the Route 31 corridor.”

Work already completed includes installation of a new waterline, relocation of utilities, construction of the retention pond, installation of culvert and a great deal of pavement work. Weather has been an issue, but not a major concern.

“The frequent rain has been a factor to some degree, particularly when building embankments, and we have a lot of concrete pavement and asphalt pavement that requires dry conditions,” said Maher, who added that key tasks yet to be carried out include switching traffic and continuing progress on Phase 1 until the project shuts down for winter.

As for the condition of the site prior to construction, said Maher, “We had to clear and grub the roadsides and remove dwellings that were acquired. There was also a lot of excavation by the ramps for Rt. 531 and Rt 36. It tied in with the drainage for the new retention ponds and a 60-inch culvert.”

Part of the construction involves lowering a hill. The approach to the Route 531/36 intersection is being shifted to improve sight distance for motorists traveling north. The roadway is closed, but access to residential driveways is maintained.

The most time-consuming part of the work will involve officials coordinating the flow of traffic through the job to keep both motorists and workers safe at all times.

“Traffic is generally being maintained for the most popular travel route through the intersection,” said Maher. “There is a detour in place for traffic on Route 36 this summer, while work is taking place on the southern approach of the intersection.”

Regarding modifications that are being made, a short section of Route 31 between Washington Street and the new corridor will be dead-ended. Homeowners will have a direct improvement of safe access to their driveways. The rest of Route 31 from Washington Street to Salmon Creek Road will be altered to have medians, a two-way center turn lane, channelized turn lanes and other traffic calming features to transition motorists from a faster expressway facility toward a two-lane roadway approaching a business district.

NYSDOT owns right-of-way along Route 31, with room to implement an environmental enhancement as part of the assignment.

“For this project we are re-establishing several vernal pools within the wooded area that border North Hampton Park,” said wildlife biologist Sarah Piecuch, NYSDOT environmental specialist. “Vernal pools are ephemeral wetlands, which fill annually from precipitation runoff and rising groundwater. They typically dry out annually, and as a result are fish-free. They only hold rain water from late March to early June. They fill in with leaves over time and new pools are created by the uprooting of trees.

“These temporary pools provide important but uncommon breeding pools for woodland amphibian, such as frogs and salamanders. Remnant vernal pools were observed over several field visits, standing water never present, but the soil was moist. These natural areas have filled in with leaves over time. Mountain dusky salamander were observed under decaying logs in late May [to] early June of 2016.”

Piecuch said minor tree removal is necessary to restore the vernal pools. Brush piles also will be made from the woody debris, which offers shelter for small to medium-sized mammals. Crews also are installing two kestrel nest boxes as part of the environmental enhancement.

“One proposed box location is in the gore area between Route 531 and what will be an abandoned section of Route 31. This area is early successional habitat that is suitable nesting habitat for American kestrels. Kestrel nest boxes also have the potential to be used by owl species. The second nest box location would be within the wooded row, outside of the cut-fill lines to provide nesting habitat for owl species. Additionally, the placement of nest boxes will exhibit context sensitivity as the road transitions from expressway to rural arterial.”

For Richard Kowalski, NYSDOT engineer-in-charge, the long-awaited work will be well worth the effort, when completed.

“Knowing that it might reduce accidents and ease traffic flow conditions justifies the work involved in coordinating the project.”