Derailing trains have hit the bridge four times in the past two years. 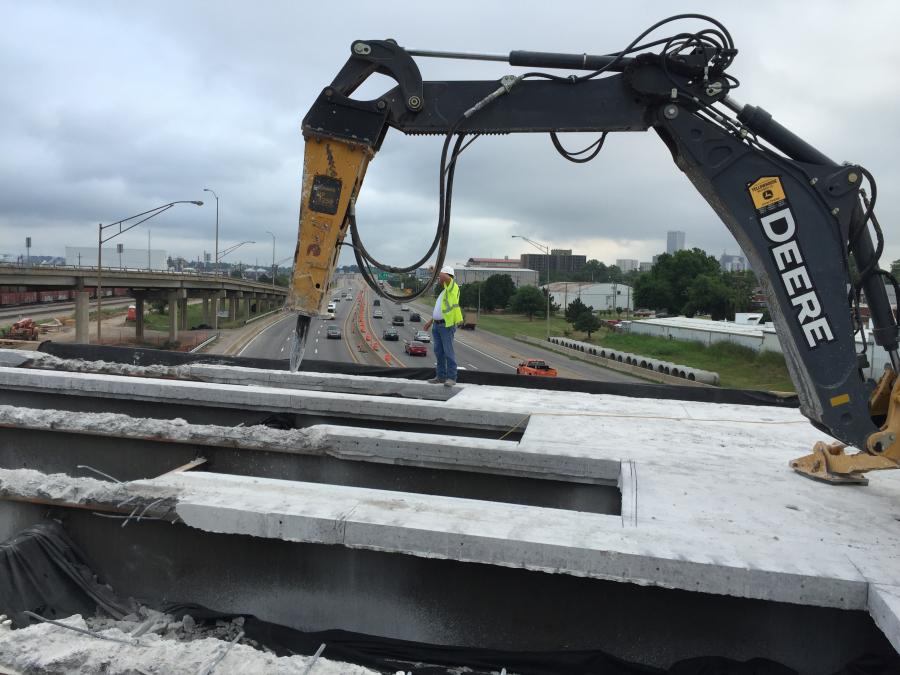 Oklahoma Department of Transportation photo. Pier protection will be part of a nearly $20 million bridge rehabilitation project now under way on the 23rd St. bridge over I-244 in Tulsa, Okla.

Pier protection will be part of a nearly $20 million bridge rehabilitation project now under way on the 23rd St. bridge over I-244 in Tulsa, Okla.

The work will impact traffic on the 23rd St. bridge until early 2018 and drivers are advised to plan ahead to adjust for slowing. The road on the bridge has been narrowed from two lanes to one as improvements continue.

The 1,000-ft. bridge crosses over both I-244 and an adjacent rail yard. Derailing trains have hit the bridge four times in the past two years. The trains damaged three piers, which were repaired.

Workers will replace the bridge deck, erect crash walls for each pier, improve the substructure and make critical safety improvements.

The project includes reconfiguring piers not only for safety, but also to help the railroad expand operations below the bridge.

All steel removed from the project becomes the property of the contractor. The steel may then be recycled or repurposed.

Contractor is Becco Contractors Inc. of Tulsa. It placed the low bid for the project and was approved by the Oklahoma Transportation Commission.

Tetra Tech of Pasadena, Calif. is overseeing the daily construction.

Between 10 and 15 workers are on the job each day.

Built in 1962, the worn bridge became classified as structurally deficient. It has also seen an increase in traffic. The bridge traffic averages about 15,800 vehicles daily.

Work on the new bridge began in May 2016, with traffic continuing to use the bridge in the narrowed configuration. Slower movement of traffic is expected to impact the nearby area during construction, but traffic is not seen as a serious problem at this point.

Numerous businesses and industries depend on the bridge for access. As do students and staff at nearby Eugene Field Elementary School.

"This is one of the few city streets connecting this area to the interstate," Zishka said.

"The bridge is open to traffic, so it is likely near the usual traffic counts at this time. There is no mitigation to other city street traffic."

Because one lane on the bridge remains open, no detour is needed for the 23rd Street crossing. But a detour is currently in place for a closed westbound I-244 off-ramp to 23rd Street.

He said one of the main challenges of the project has been working over the active BNSF (Burlington Northern Santa Fe) rail yard at the same time rail construction crews are working on a project to expand the rail yard. The rail project is not connected with the bridge project, but requires coordination and planning between the two jobs.

"There are meetings weekly to plan and work out issues," Zishka said.

He added that coordinating the two projects has not slowed progress or added additional costs to the bridge project.

A separate $1.7 million project began in May to construct a retaining wall along the adjacent rail yard in the corridor, which also is impacting traffic on westbound I-244.

Drivers can expect delays throughout these projects, especially during peak travel times and should plan ahead for extra travel time or consider an alternate route if possible.

Lane closures will be announced in the Traffic Advisories section of www.odot.org as they are scheduled throughout the project.—CEG