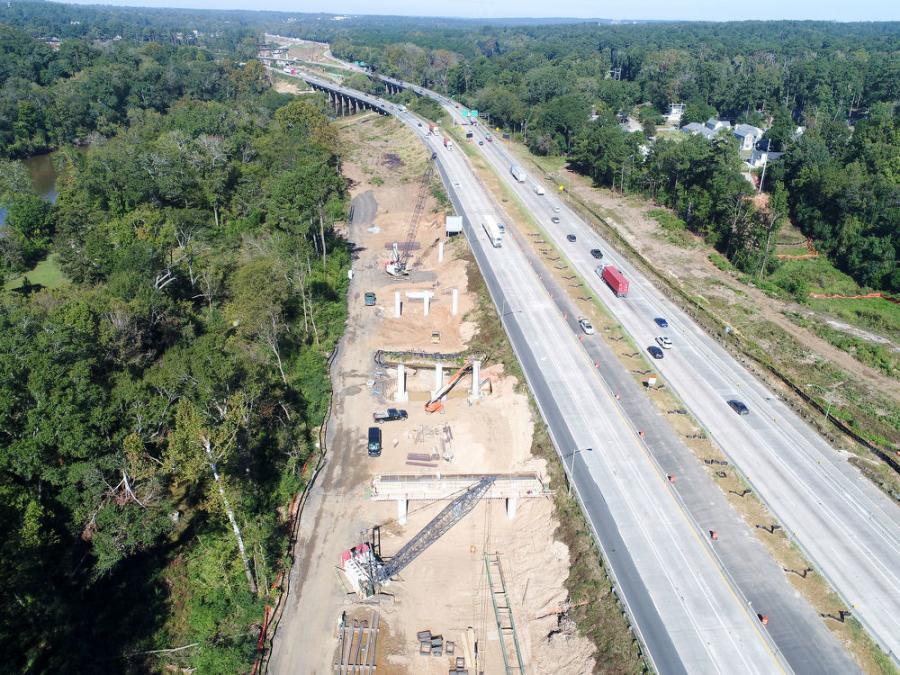 Phase one of the $500 million I-16/I-75 interchange improvement project in Macon, Ga., is well under way, but while the road to completion is a long one — approximately eight years — the completed project should dramatically improve what is currently a very busy and congested commute.

Phase one of the $500 million I-16/I-75 interchange improvement project in Macon, Ga., is well under way, but while the road to completion is a long one —approximately eight years —the completed project should dramatically improve what is currently a very busy and congested commute.

“This was built in the early 1960s when Macon had a small population,” said Dane Nelson, general supervisor of C.W. Matthews, the contractor awarded the $63 million Phase one contract. “The growing population has quadrupled since then. The patterns designed back then don't work for the traffic patterns today. It's so outdated. What we are doing now will so enhance the traffic patterns. It will get everyone from home to work and from work to home quicker and safer than what they've been for the last 40 years.”

Crews broke ground and began the clearing work on Phase one in April. The first phase is expected to take four years to complete and involves the construction of six bridges and nine walls. Two of the bridges are river crossings, spanning the Ocmulgee River. The other four are fly-over bridges and two of those, which will redirect traffic during construction, will be transformed in pedestrian bridges during phases four and five of the project.

“The challenge for this job is mainly the traffic patterns,” Nelson said. “The highway is highly traveled and congested. We're having to build this thing under traffic and staging it at multiple times. Challenge one is to build it, and two is to keep the traveling public safe.

“Right now we are doing temporary paving areas where we are putting up temporary concrete barriers to guide traffic to where we can build new roadway. We've started building bridges. The reason we are doing the temporary paving is because we are only allowed to shift traffic from one lane to the other. We're not allowed to close down traffic at any time. We can channel to single lane or double lane closures at night, but only from 9 p.m. to 5 a.m. Otherwise, there is no interrupting traffic unless there is an emergency. It makes it a little harder to do our job but that is why we do what we do.”

Nelson estimates there are about 22 pieces of heavy equipment on the job site, almost exclusively a Caterpillar fleet that includes cranes for the bridge crews, dozers, loaders, mini-excavators, 60,000-lb. excavators, front end loaders and soil compactors. He expects the fleet to double in size in the coming months.

While the main challenge of the project is working with traffic, crews also have had to take a different approach than usual for some of the walls due to soil conditions along the river.

“There is a lot of sand,” Nelson said. “A lot of rocks. Some of the walls are being built on wood pilings. We have to drive 300 wood pilings to set the wall on to be safe. That's unusual. That's something you see in coast areas, but not middle Georgia.”

The bridge work also has played a significant role in the construction schedule.

“One of the biggest things we face as far as things that concern us is the environmental concerns along the river,” Nelson said. “There are limited times we can work. On two of these bridges we are going to build, we have to first build what is called work bridges. We have to build a jetty out to the water to put the equipment on to build the bridge. In the river there is a species of fresh water sturgeon and because of the sturgeon, we are only able to work certain times of the year. Anything that changes the habitat of that fish has a lot of impact on us and being able to work. We are required by state to create a critical path schedule. We can't deviate from that critical path schedule. The next phases tie into those jobs so we have to meet those deadlines. It's a no-fail situation.”

The first phase also includes a sub-phase, or Phase 1B. That, along with Phases 2 and 3, were awarded to E.R. Snell. The $12 million Phase 1B involves mitigation improvements to the Pleasant Hill neighborhood on the I-75 corridor, the relocation and rehabilitation of homes to seven vacant lots and building 17 new residential structures throughout the community. The project also includes cultural resource mitigation efforts to capture the oral and visual history of the Pleasant Hill neighborhood, creating two parks and relocating the “Penniman House,” the boyhood home of Little Richard. It will be relocated adjacent to the Jefferson Long Park and will serve as a community resource center, with specially created mobile interpretative panels on display.

Phases 2 and 3 — awarded for a total of $268 million — consist of operational improvements, including new ramps and exits.

Phase 4 — three miles of capacity and operational improvements to I-16 EB from I-75 to Walnut Creek — is scheduled to be bid in 2021.