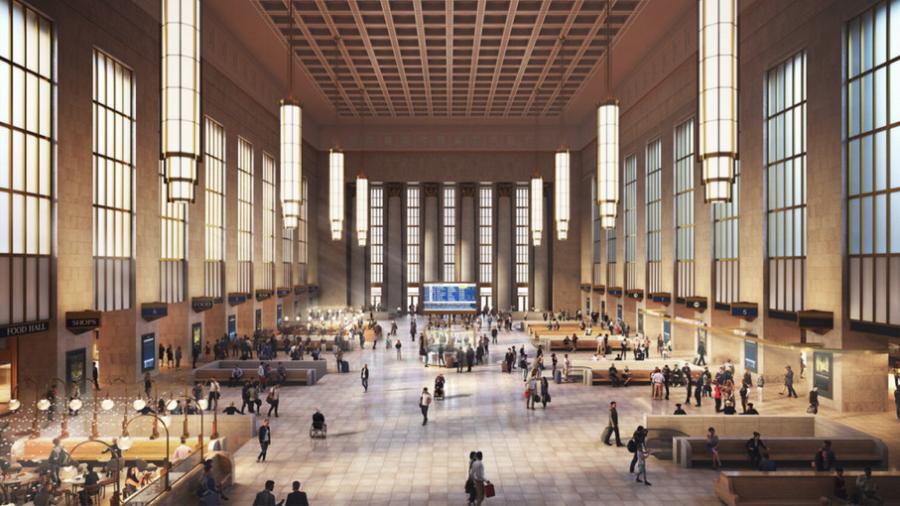 Amtrak and Plenary Infrastructure Philadelphia (PIP) reached a deal Sept. 15 on a lease and development agreement for the restoration and renovation of the William H. Gray III 30th Street Station in Philadelphia, multiple news sources reported.

Under the agreement, PIP will refurbish and upgrade the historic 88-year-old building, finance all improvements and maintain the station for a 50-year term, according to a news release.

PhillyVoice reported that the renovations are just one brick in Amtrak's $10 billion 30th Street Station District Plan, a building effort that intends to add 18 million sq. ft. of development space and 40 acres of open space over a 35-year timeline. The rail corporation said the projects will be completed on schedules that do not interfere with passenger service.

Long-planned renovations that will revamp the interior of 30th Street Station, including the food court and corporate offices, will commence next spring.

The project is expected to be finished by 2025 and create approximately 3,000 jobs, according to a PIP news release. The effort follows facade cleaning and restoration efforts made by Amtrak over the last several years.

The massive restoration of the 30th Street Station will seek to maintain the nearly century-old building's historic vibe while making station operations more efficient and convenient, PhillyVoice noted. The plan remains in the design phase, but includes the following proposed amenities:

The 30th Street Station project also will include an enhancement of the building's original Neoclassical and Art Deco architectural styles and renovations to the station's corporate offices.

"The scope of this work will transform this historic Philadelphia landmark into a modern world-class station with superior amenities, better intermodal connectivity and new customer-facing improvements over the next five years," explained Dennis Newman, Amtrak's executive vice president of planning and asset development.

Plenary Concessions Americas' executive chairperson Dale Bonner said in a statement: "We look forward to our long-term partnership with Amtrak and ensuring an improved customer experience for travelers and visitors to this historic station."

According to Railway Age, a nationwide news source, Amtrak is owner of the 30th Street Station project, while key PIP members include Toronto-based Plenary Americas, the lead developer; Gilbane Building Co., the nationally known design-builder (which maintains an office in Philadelphia); and Chicago's Skidmore, Owings and Merrill, serving as lead architect.

The building opened in 1933 at 2955 Market Street by the Pennsylvania Railroad and is listed on the National Register of Historic Places.

In 2014, Congress passed legislation to rename the 30th Street Station in honor of Congressman William H. Gray III, who represented Pennsylvania's 2nd congressional district from 1979 to 1991.