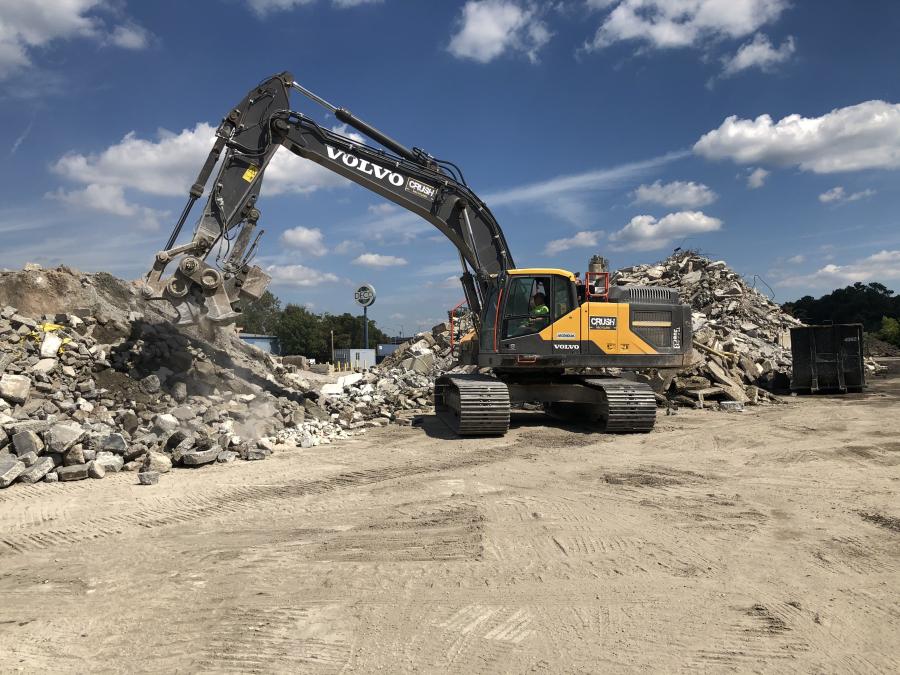 At Crush Concrete Recyclers LLC, a stand-alone business for DECO at the company’s yard in North Charleston, employees use Volvo 380s mounted with LaBounty CP100 pulverizers custom engineered with a magnet located on the back side.

At a site off Interstate 26, northwest of Charleston, S.C., Volvo construction equipment, including large and medium crawler excavators, can be seen knocking down an old auto parts manufacturing facility.

The company having the work done is Mercedes-Benz, the iconic European-based vehicle maker, and the contractor it chose to perform the work is among the more dynamic firms of its kind in the southeast.

Demolition Environmental Co., or DECO, is a North Charleston firm that has developed quickly in its 18 years to where it is poised for success and sustainability.

The company is noted for its outstanding demolition and asbestos solutions.

DECO is demolishing a 180,000-sq.-ft. building adjacent to the German automaker's current van production plant in Ladson, S.C. The structure had been used by IFA, a direct supplier of components for Mercedes-Benz. IFA had outgrown the facility and moved to a larger location. The old IFA property was recently acquired by Mercedes-Benz and will, after the demolition, be rebuilt as part of a manufacturing facility for the company's next generation eSprinter electric-powered vans.

Brandon Martin, president of DECO, said that the company's work is a first step in helping to expand the current Mercedes-Benz plant, and he is proud to be playing a part in the automaker's overall strategy of producing a 100 percent electric Sprinter vehicle lineup by 2028.

DECO Throws Its Volvos Into Fray

To perform the demolition within a timeframe of approximately 60 days, Martin said that he and his company have brought their most reliable equipment to the IFA site. To service them, DECO turns to Ascendum Machinery, a construction equipment dealership offering a full range of services across the Southeast. The company's North Charleston location has provided DECO with top-shelf Volvo excavators for 18 years, all mounted with rugged and versatile attachments to tear down buildings.

"We are using three Volvo 200s, two of which have hydraulic thumbs attached and the other with a shear," Martin said. 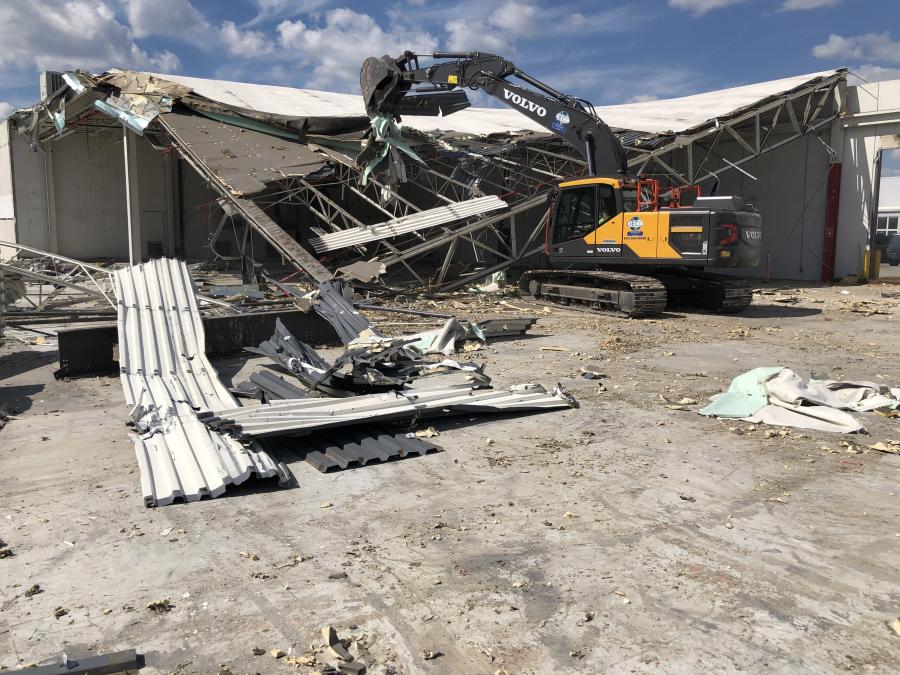 At Crush Concrete Recyclers LLC, a stand-alone business for DECO at the company's yard in North Charleston, he noted that his people also use Volvo 380s mounted with LaBounty CP100 pulverizers custom engineered with a magnet located on the back side.

"As you pulverize the concrete, you can roll the magnet, operate it off a generator set and remove the rebar so that it doesn't end up in the crusher," he said.

Martin has preferred using Volvo in his business since he and his partner, Brian Hillen, began the company in 2003.

"If I remember correctly, our first Volvo was a model 360-A excavator,'" he said. Mitch Bailey and his service department at Ascendum in North Charleston are on top of their game and really take care of us. That is one of the key things we like about Volvos, along with the types of machines available."

DECO also likes the ergonomic designs and their inherent durability.

To Martin's way of thinking, the combination of Volvo's reliability and Ascendum Machinery's sales and service has worked extremely well for DECO and its success.

"They are tough and work in harsh conditions, and we are hard on these machines," he said. "They do very heavy lifting, heavy pulling, breaking, crushing — we destroy things for a living, after all. Just the vibrations, alone, that they must endure are tough on these machines. They are put through the wringer, and they are holding up for us."

By the time he was age 27, Martin had worked in construction for a few years before he took a job at U.S. Rentals (now United Rentals) in the Charleston area. He quickly became a rental manager at the rental store, before moving on to working in the dumpster industry selling to roll-off customers and to the waste business in general.

Following that, he and Hillen decided to try their hand at running a demolition business, which they operated as B&B Demolition Specialists from 2003 to 2012.

"We liked demolition and were intrigued by it," Martin said. "We put a business plan together and were able to get some money. Once we started, we never looked back. It was just me, Brian, two laborers and no equipment, but we grew, and although we had a few bumps along the way, it was a great learning experience."

B&B's first large project was an EMAC, or Environmental Multiple Award contract, with the U.S. Navy through a company called Toltest, he said. At the Navy's old weapons station in North Charleston, his company destroyed and removed 38 old structures spread across the base, including ammunition bunkers.

Martin noted that B&B recycled everything possible on the project.

"The concrete debris was taken to Sanders Brothers Construction and to Banks Construction, the two big players around here," he said. "Steel, recyclables, ferrous and non-ferrous materials went to Charleston Steel, and whatever couldn't be recycled ended up in the landfill."

According to Martin, B&B Demolition grew to become a company with around 30 employees, which he considered to be a decent size. But he also noted that, although clients loved B&B's work, it kept getting passed over for the bigger area projects because, as he said, "it seemed that people didn't understand what our capabilities were." 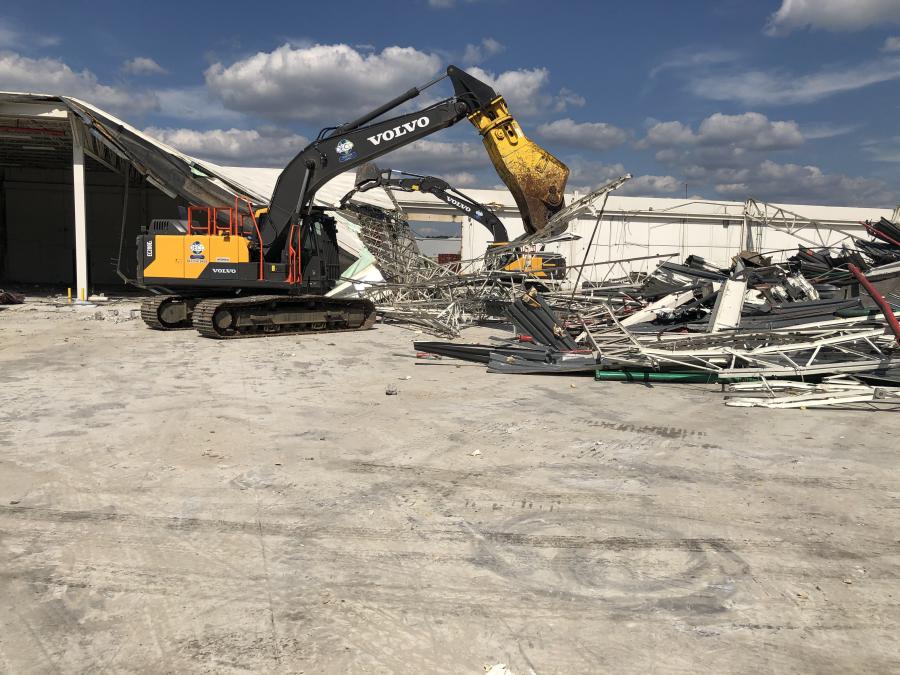 That led to the operation being rebranded as DECO — complete with a fresh look and logo emphasizing the firm's environmental services. Additionally, the company expanded its offerings to include two concrete handling divisions in Crush Concrete Recyclers and Universal Sawing Group.

In the process, the DECO team has made a name for itself in its ability to effectively manage total demolition and selective demolition projects safely, on time and on budget.

Martin said the rebrand gave DECO "more curb appeal," but added that changes in management style and personnel "really held the key" for sustainable growth. As proof of that, after the adjustments were made nine years ago, DECO's workload more than doubled over the next several years, he said.

Sustainability Plans Being Made

Now, Martin feels he has assembled a management team made up of several skilled individuals and plans to utilize their talents to make bold expansion moves in the industry.

"Creating sustainable growth and wealth for all our team members long term has become our primary goal," he said. "How this is achieved is still in the planning phase but seems very promising."

DECO has appointed team members to assume the day-to-day roles in the company so that Martin can concentrate on its future in the industry.

"We have chosen the dedicated team members that made DECO successful — all of whom could be competition tomorrow if they had the wherewithal to do so," he said. "They have poured their sweat and effort into helping us stand above the rest. We are excited for the next chapter in our journey as a company and look forward to the success of all our team members in the industry. The partners at DECO have created a plan to give them every opportunity to control their own destiny."

Martin's goal for DECO has always been to become a top-tier contractor and work hard to retain that status.

"When we first opened 18 years ago, we had recognized a need in the Charleston area for a professional demolition and asbestos-removal contractor.

"Now, we are probably the most successful and efficient we have ever been, and that is due, in part, to our ability to empower people to help us," he said. "We have an incredible management team, and Brian and I couldn't do it without them.