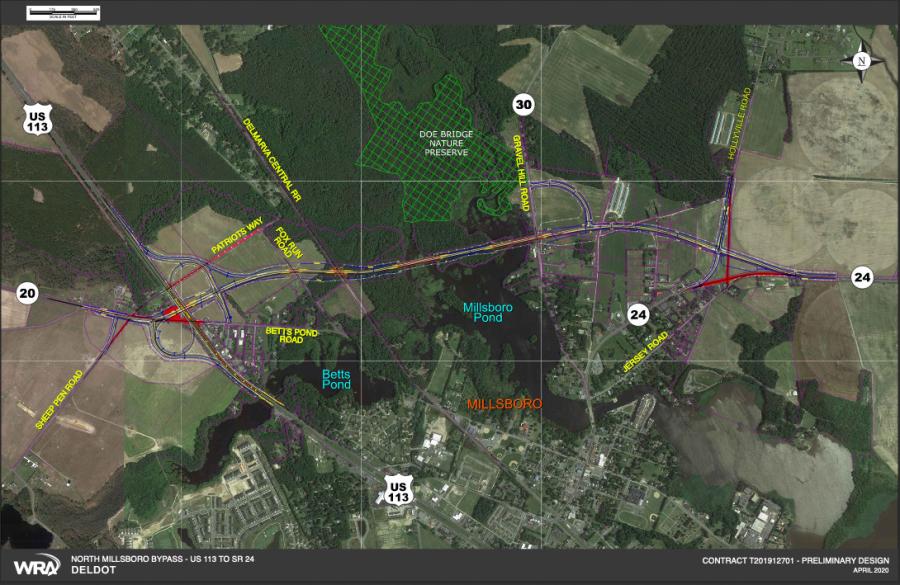 Construction on the bypass, which will take traffic from U.S. Highway 113 north, around Millsboro to DE Route 24, is still scheduled to start in 2023, according to Mark Whiteside, project engineer of the DelDOT Project Development South.

Plans for the new $85 million bypass designed to relieve traffic jams in downtown Millsboro, Del., are on track and have not been delayed by closings or restrictions due to the pandemic.

Construction on the bypass, which will take traffic from U.S. Highway 113 north, around Millsboro to DE Route 24, is still scheduled to start in 2023, according to Mark Whiteside, project engineer of the DelDOT Project Development South.

"The alignment hasn't changed. It's the same as it has been," he told the Coastal Point. "The coronavirus didn't delay it at all. The DelDOT design team has kept moving forward since the virus. The final plans should be approved by the end of summer. That's when we will begin the right-of-way acquisition phase."

DelDOT will buy property from owners to make space for the bypass.

The new connector road will give trucks, including tractor-trailers, an alternate route to going through downtown Millsboro, with its slower traffic, quaint shops and restaurants.

"The only way to get on Rt. 24 now is through Millsboro," Whiteside told the community newspaper last July, when the project was announced. "We want to lighten congestion, especially during peak hours. One thing really causing congestion is trucks. The quality of traffic flow is very poor in that area. We are building this for safety and to alleviate that congestion. We hope the trucks will use it."

The two-lane bypass will have one artery for traffic traveling in each direction, extend for 2.5 mi., and have a 45-mph speed limit.

It will feature ramps and five bridges that DelDOT engineers said will be aesthetically pleasing, rising over the Norfolk Southern Railroad line, Millsboro Pond, Gravel Hill Road and other areas of water or vegetation.

The cloverleaf overpass will have two loops, one in the northeast quadrant and one in the southwest.

"Construction of this bypass won't affect existing traffic as much as you think, because of the alignment. We are designing a brand-new road with no traffic on that road," Whiteside said.

"Hopefully, it will take some traffic away from downtown Millsboro so some restaurants can have more outdoor seating," he added. "One question still in the air is: Can we have a designated truck route? There might be federal restrictions that prevent truck routes from being put into place when you're close to a U.S. highway like 113, so there have been mixed messages in that regard, but it is certainly something the town would love to see — a designated truck route to allow more passenger cars and trucks downtown."

Construction will be funded by the federal government and the state through the 2025 fiscal year, with 80 percent to be paid by Washington.

Road upgrades in the Millsboro area had been discussed for years, with several variations proposed, and Whiteside said new designs will accommodate traffic levels anticipated for the next 20 to 30 years.

"There is $544 million worth of projects in the planning stages," he said, including the Millsboro cloverleaf, a future traffic congestion alleviation project from Ellendale to Millsboro, and an eventual widening of U.S. 113.