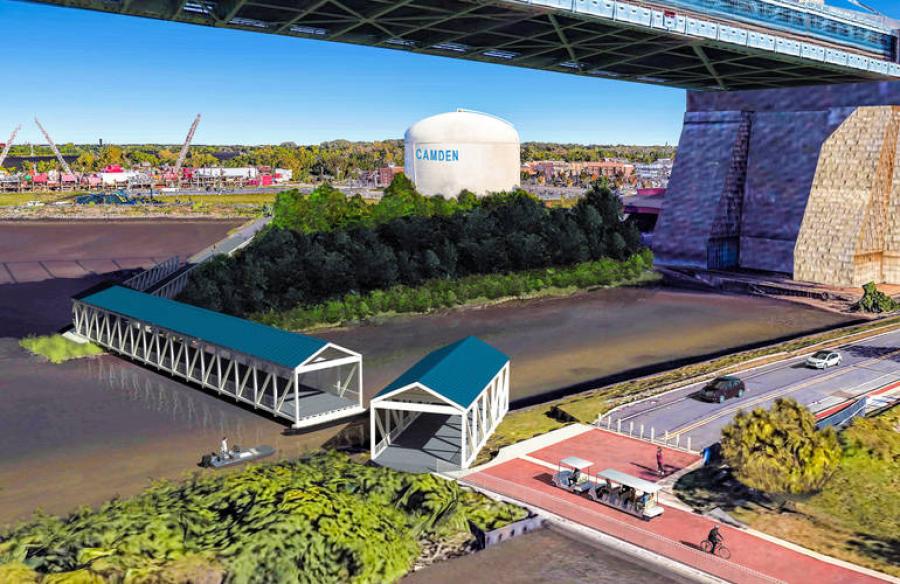 A rendering of the swing bridge opening to allow a boat to pass, at the Cooper's Poynt Waterfront Walk Extension. (Rendering courtesy of Camden County)

Although it will take nearly four years to complete, a pedestrian/bicyclist bridge under Camden, N.J.'s Ben Franklin Bridge connecting the city's waterfront to Cooper's Poynt Park, is set to begin design work in January.

The new swing bridge, estimated to cost $5.2 million in design and construction, would join Camden's Delaware River waterfront promenade, which now ends near Water and Pearl streets, to the park on the north side of the Ben Franklin Bridge. The promenade starts in the south at the Battleship New Jersey mooring and Wiggins Waterfront Park.

TAPinto Camden reported Nov. 23 that Camden County has not named the source of funding for the project's construction costs, estimated to be $4.3 million. That figure came from a project study and the county's Request for Proposals for the preliminary and final engineering design of the structure. The RFPs were due Dec. 6.

"We took feedback directly from our stakeholders, officials and residents who want better access to and from the Delaware River," Camden County Commissioner Jeff Nash said in a statement in response to a TAPinto Camden inquiry.

"When this is finished, this area will be yet another important asset here in the city of Camden as this project will increase the pedestrian traffic along the waterfront by an estimated 3,000 pedestrians/bicyclists per day."

A September 2021 study of the project commissioned by the county, the city and the nonprofit Camden Community Partnership reported that about 70 pedestrians and bicyclists currently use the promenade, but new development along the waterfront would increase the traffic to the number cited by Nash.

The design will include a covered swing bridge at the end of the waterfront promenade to allow boats from the Delaware River Port Authority (DRPA), owner of the Ben Franklin Bridge, to access the inlet under the Ben Franklin, which connects Camden to Philadelphia.

A bridge providing boat access was requested by the DRPA, and the authority also asked for a roof over the bridge to protect pedestrians from the potential of falling debris from the 96-year-old suspension span, according to the 2021 study.

Plans include building a second bridge, fixed and uncovered, to lead from the swing bridge to a path to Cooper's Poynt Park, TAPinto Camden noted.

Camden County spokesperson Dan Keashen told the news service that the swing bridge project timeline calls for the preliminary design to be completed in January 2024, with the final design to be ready in February 2025, followed by 18 months for construction because of New Jersey Department of Environmental Protection restrictions concerning building in water.

If all goes to plan, the pedestrian/bicycle bridge could open in September 2026.