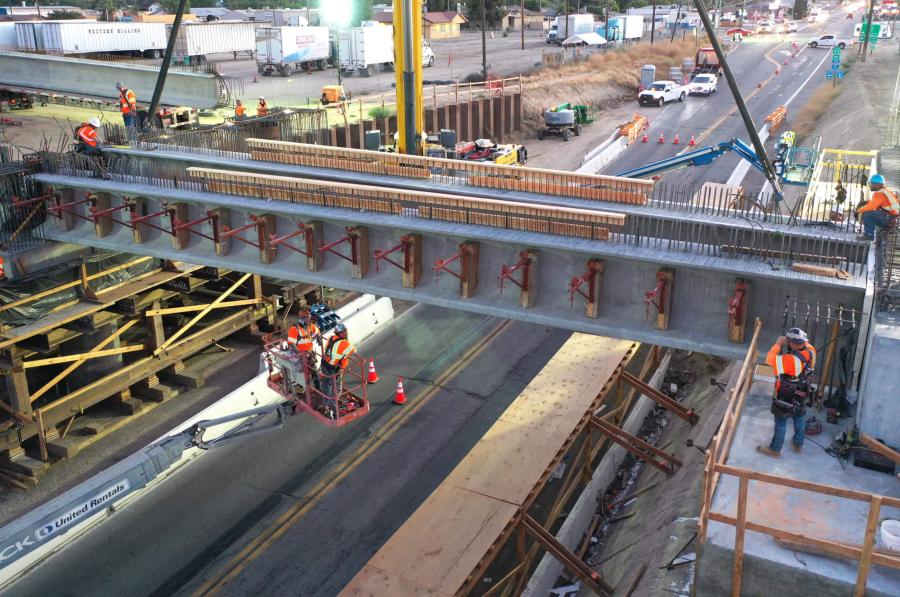 The ongoing multi-billion-dollar project to establish a high-speed rail line between San Francisco and Los Angeles has seen its fair share of obstacles in gaining approval, but contractor crews have started significant construction in certain areas of The Golden State.

The design-build project, overseen by the California High-Speed Rail Authority (Authority), has been divided into separate construction packages. Construction Package 4 (CP 4), which covers portions of Tulare and Kern counties, is being constructed by California Rail Builders (CRB), a joint venture of Ferrovial-Agroman West LLC and Griffith Company. 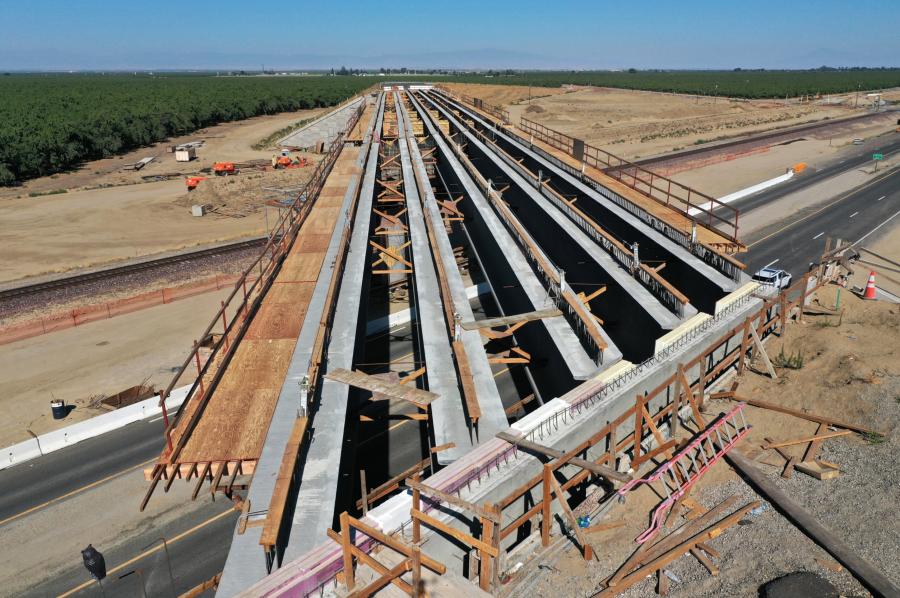 CP 4 is the third significant construction contract being undertaken for the Initial Operating Section of the high-speed rail program, which covers a 22-mi. stretch that starts approximately 1 mi. north of the Tulare and Kern County line and ends at Poplar Avenue to the south. This package includes construction of at-grade embankments, culverts and wildlife crossings, retained fill overcrossings and viaducts, aerial sections of the high-speed rail alignment and the relocation of 4 mi. of existing Burlington Northern Santa Fe (BNSF) tracks.

HNTB Corporation is serving as the Authority's project and construction manager.

"They are our eyes and ears on the ground in the Central Valley," said Augie G. Blancas, the Authority's public information officer. "Team members working with the Authority are providing assurance to the people of California that technical and contract requirements are met for CP 4."

According to the Authority's 2022 Business Plan, CP 4 will be substantially completed by March 2023.

Efforts are ongoing to ensure that the overall project has secured all the approvals to construct the HSR.

The Authority's board of directors approved contracts to advance design of the 52.4 total mi. that will extend the project into Merced and Bakersfield, which brings the project closer to constructing the final Central Valley packages to complete the 171-mi. high-speed rail electrified segment and ultimately connect to the Bay Area and Los Angeles.

At the Merced Avenue Grade Separation south of Wasco, crews installed 15 precast girders that spanned more than 177 ft. They are some of the longest manufactured by subcontractor Con-Fab California at its Lathrop plant.

"Each girder weighs more than 220,000 pounds," said Blancas. "Confab also has provided precast concrete girders for other high-speed rail structures including the San Joaquin River Viaduct and Pergola in Fresno and Madera counties."

The Merced Avenue Grade Separation will be more than 509-ft. long and 43-ft. wide when it's completed. 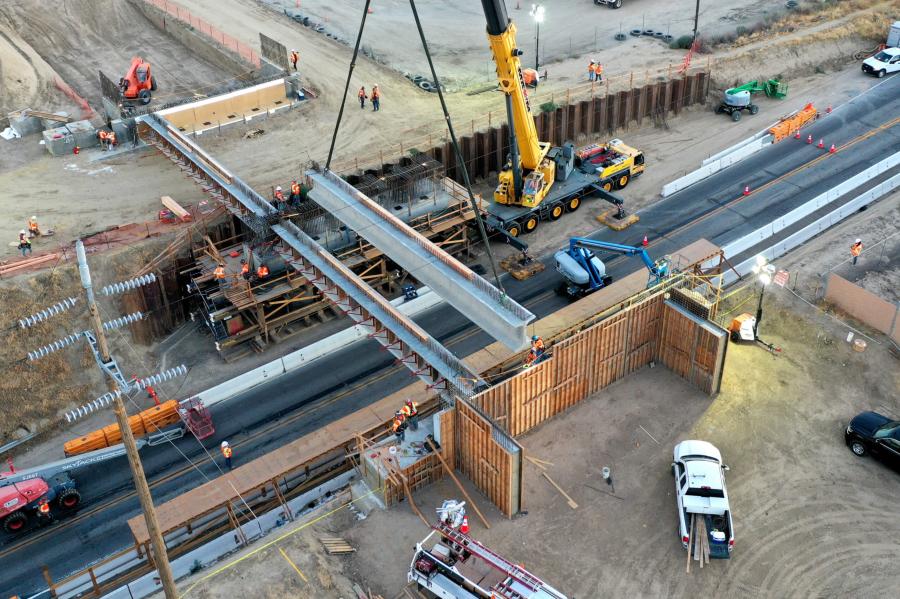 "Taken together, these contracts bolster the Authority's effort to have high-speed trains operating in the heart of California by the end of the decade," said Authority Chairman Tom Richards in a press release. "These contracts demonstrate our ability to leverage lessons learned from past contracts, increase project readiness and prepare for continued progress on this transformative project."

The Authority awarded the $41 million Merced to Madera extension design contract to Stantec Consulting Services Inc., which covers approximately 33.9 mi. with 40 structures. The $44.9 million Fresno to Bakersfield (Locally Generated Alternative) extension contract was awarded to HNTB and covers approximately 18.5 mi. between the cities of Shafter and Bakersfield in Kern County with 31 structures.

"The contracts are expected to last two years and the two companies will work with the Authority to finalize the project configuration footprint and advance design work to refine costs and travel time enhancements, and map right of way and utility relocation," stated the HRS press release. "These critical steps will move the sections closer to construction, with the goal of electrified high-speed trains running between Merced and Bakersfield by the end of the decade."

Earlier the summer, the U.S. Department of Transportation awarded the Authority $25 million in federal grant funding to advance the project into downtown Merced. The Rebuilding American Infrastructure with Sustainability and Equity (RAISE) grant will provide more than half of the cost for the Madera to Merced design contract.

"With environmental studies completed in Northern California, we are closer than ever to realizing a first in the nation, statewide high-speed rail system," said Richards in a press release. "We look forward to working with all of our regional partners and stakeholders in developing modern, sustainable transportation infrastructure, completing our work in the Central Valley and connecting to the Bay Area as soon as possible."

The approval of the San Francisco to San Jose HSR project section and its environmental document represents a major milestone in advancing the entire statewide program by linking the San Francisco Bay Area and the Peninsula to San Jose, the Central Valley and Los Angeles County in Southern California.

This past summer, the Authority announced it reached a historic milestone as the last of the precast concrete girders were placed in the whole of CP 4 with the installation of 12 girders over the State Route (SR) 46 Underpass. This structure will take high-speed trains at 220 miles per hour over SR 46, which will run parallel with the BNSF railroad. With this placement, all structures along the 22-mi. stretch of high- speed rail between are now in construction.

The JV has completed sections of the project, including structures at Garces Highway, Pond Road, Peterson Avenue and Poso Creek. Over the next several months, work will focus on completing the rest of the structures like the Wasco Viaduct and Merced and McCombs Road grade separations.

Using prefabricated elements, such as the panels for the mechanically stabilized earth (MSE) wall, has allowed CRB to optimize the schedule by having them on time for installation and to get a higher final product quality.

"We are also doing a lot of cast-in-place concrete work," added Blancas. 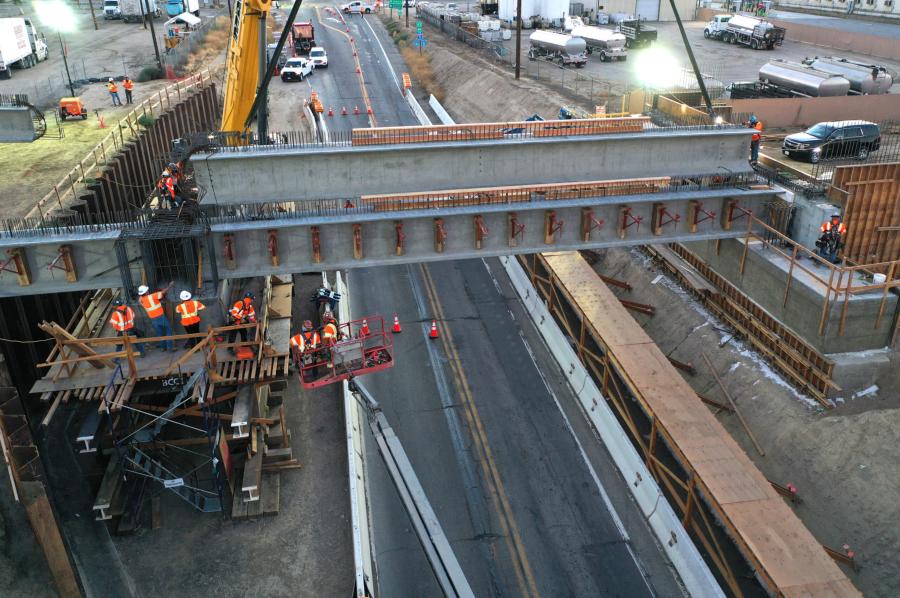 The installation of the precast concrete girders required a fair amount of preparation.

"Planning starts months in advance, beginning with the design, getting the fabricator and lots of coordination with third parties for road closure permits and allowing time in the schedule for the unforeseen circumstances like weather delays, breakdown in equipment," added Blancas. "Some of the girders were so long that CHP had to guide the girders, which required five to six-weeks notice and a planned route agreed with the trucking companies. The girders of Wasco need 50 minutes. Around 15 minutes to rig, around five minutes to fly the girder and set, 20 minutes for bracing and 10 minutes to disconnect the rigging. For McCombs and Merced, the average was around 75 minutes."

Key pieces of equipment being used include cranes, excavators, dozers, loaders, dump trucks, forklifts and other pieces of iron, large and small. Cranes, including those lifting girders at the SR 46 site, include: an HTC 8675 and Link-Belt LS-338 from MCM Equipment Sales; and an HTC8690, a Grove GMK 5275 and a Grove GMK 5210 from T&T Equipment Co. Other equipment used include a Link-Belt TCC750 from Keller Equipment Supply and a Manitowoc MLC300 from ConFab.

The recycling of materials excavated and demolished, as well as other measures to minimize GHG emissions and be as sustainable as possible, are a priority for the HSR and the companies it has hired to do the work.

Last spring, the last four of 120 precast concrete girders were placed on the pergola section of the Wasco Viaduct, a nearly 2,000 ft.-long structure taking trains above grade and over existing rail lines.

"The Authority's goal is to deliver the greenest infrastructure project in the nation, even on the construction site," said Blancas. "The Authority has required contractors, including CRB, to recycle 100 percent of the steel and concrete from construction and demolition and divert at least 75 percent of all construction and demolition waste from landfills. In regard to air quality, contractors must use trucks and equipment that comply with California requirements. This includes usage of Tier 4 equipment, the highest EPA equipment rating, that reduces the amount of criteria air pollutants."

Peak days have approximately 300 workers on-site. The JV has brought in many local and regional subcontractors.

With so many types of construction equipment on-site, it is essential to have machinery working efficiently to maximize production and repairs are done rapidly, either by on-site mechanics or those brought in as required. Routine maintenance schedules are adhered to and operators check their vehicles daily and report any possible problems to management.