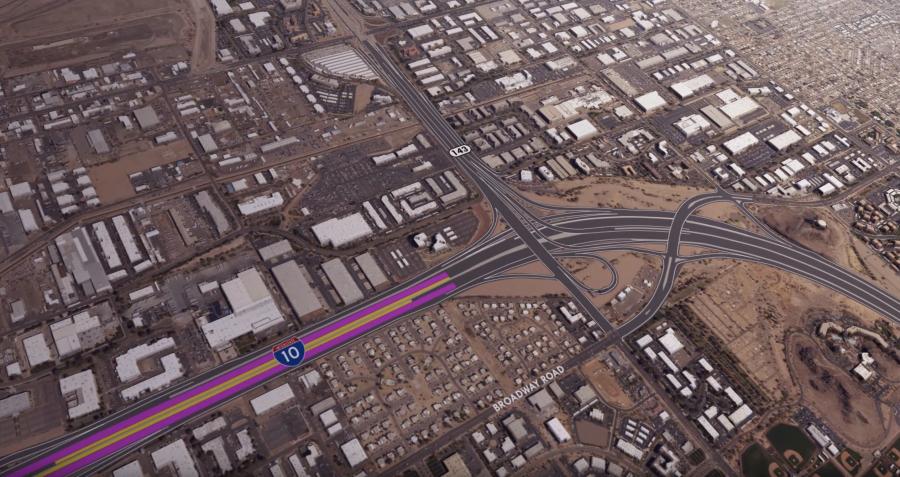 The project includes adding traffic lanes and building new bridges on parts of an 11-mi. stretch of Interstate 10.

Phoenix (AP) — Transportation planners are spreading the word that the start of a multiyear project to rebuild a critical freeway corridor in the heart of the Phoenix metro area is only about a year off.

The project includes adding traffic lanes and building new bridges on parts of an 11mi. stretch of Interstate 10. That stretch extends northward from the junction with the state Route 202 freeway in Chandler to where I-10 meets Interstate 17 in central Phoenix near Sky Harbor International Airport.

"This is going to be the most disruptive project we've had in this region from a transportation perspective," warned Eric Anderson, executive director of Maricopa Association of Governments. Construction work for the project is expected to begin in spring 2021 and take about four years to complete, according to the Arizona Department of Transportation.

Herrmann said department officials anticipate completing the final environmental assessment and receiving a favorable finding of "no significant impact" within the next 60 days.

The heavily-traveled stretch is often jammed mornings and late afternoons with commuters and long-distance travelers, though the recently opened South Mountain Freeway ringing part of metro Phoenix is expected to divert some traffic either heading across the metro area or just passing Phoenix and its sprawling suburbs.

Anderson told Phoenix City Council members recently that the project could save up to 2 million hours of travel time a year, KJZZ-FM reported.

Much of the reconstruction will center around a segment where five bridges will be built in the vicinity of state Route 143, a short north-south freeway. Its alignment east of Sky Harbor.

In the the northern part of the project area, a collector-distribution road system will be built to reduce the number of lane changes on the main portion of I-10 and improve traffic flow, the Arizona Department of Transportation said.

Other work includes expanding interchanges with SR 143 and U.S. 60, another freeway that connects with I-10.

"So based on the real world inputs, we'll be able to develop ‘what if' scenarios to understand how construction might impact traffic and what tools really we have at our disposal to be able to mitigate some of those impacts, to make things smoother," Bullen said.