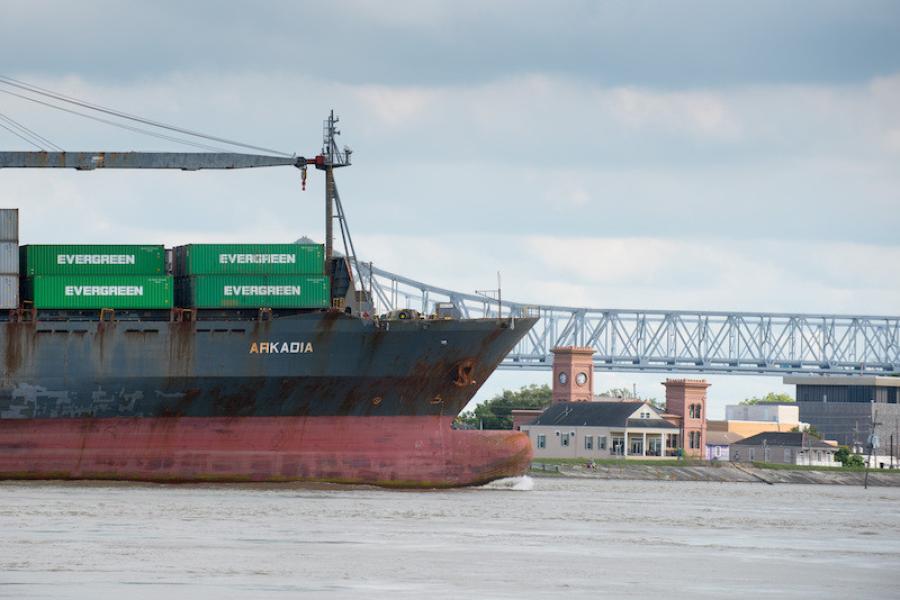 In 2018, the USACE estimated that the expansion of trade resulting from the huge container vessels mooring at the state’s lower Mississippi riverports would result in an average boost to the national economy of $127.5 million a year. (Port of New Orleans photo)

The years-long effort to deepen the Mississippi River Ship Channel (MRSC) from 47 to 50 ft. crossed a major milestone in late December when the Crescent River Port Pilots Association (CRPPA), which guides ships entering the channel from the Gulf of Mexico up to New Orleans, increased its maximum draft recommendation from 47 to 48 ft.

It was the first time the "controlling draft" on the river had been expanded since it was deepened to 47 ft. in the late 1980s and early 1990s.

The new draft is part of a $238 million effort to deepen the lower MRSC via dredging operations first launched by the U.S. Army Corps of Engineers (USACE) in 2020, Engineering News-Record reported Feb. 7.

Since that time, the federal agency has succeeded in lowering the first 172 mi. of the MRSC to a minimum depth of 53 ft., so ships with a 50-ft. draft can safely navigate the waterway up to the Port of South Louisiana, a 54-mi.-long stretch of the river between New Orleans and Baton Rouge.

When fully completed it will allow passage using the 50-ft. standard on the lowest 256-mi. stretch of the river from the Gulf of Mexico to Baton Rouge. It also will provide deep-draft access for four major dockyards: the Plaquemines Port, Harbor and Terminal District, the Port of New Orleans, the Port of South Louisiana and the Port of Baton Rouge.

Principally, the new draft standard will allow larger "Post Panamax" shipping vessels to use the waterway and access the ports on the lower Mississippi.

In 2018, the USACE estimated that the expansion of trade resulting from the huge container vessels mooring at the state's lower Mississippi riverports would result in an average boost to the national economy of $127.5 million a year.

"The newly-established controlling maximum freshwater draft of 48 feet is a key victory to the nationally-significant project to mechanically deepen the [MRSC]," Sean Duffy, executive director of the Big River Coalition, wrote to stakeholders recently, according to the Journal.

He added that the goal of the ongoing project is to deepen the busy channel to 50 ft. from Mile 233.8 in Baton Rouge to Mile 22 below Head of Passes, near the mouth of the river.

"The pilots are actively reviewing all data, including channel surveys, because decisions to advance a 50-ft. channel are a top priority," Duffy explained.

The project is a cooperative effort undertaken by the USACE, the state of Louisiana and the Port of New Orleans.

Dredging Project Got Under Way in 2020

The News-Record noted that the $110 million first phase of the project, started in September 2020, involved lowering the ship channel depth from 45 to 50 ft., from the Gulf of Mexico through Southwest Pass to Belmont Crossing. The material dredged from the first 30 mi. of the project near the mouth of the Mississippi was reused to restore approximately 1,462 acres of marsh habitat, a job that was completed in May 2021.

In October, work on the $47.5 million second phase was finished through the lowermost four crossings between Mile 113 and Mile 175 to a depth of 50 ft. Five more crossings are still to be dredged, which the USACE expects to complete by the end of 2022.

Seventy-five percent of the cost of each of the first phases was funded by the federal government, while non-federal sources supplied the rest, noted Jessica Ragusa, the Port of New Orleans' communications manager.

Waterway Journal reported Duffy explained to Big River Coalition that although the lowest 172 mi. of the ship channel were dredged to the proper depth, the new draft standards for pilots using the waterway were delayed due to what he described as "invisible infrastructure," namely a pair of pipelines around Mile 158, and two others near Venice.

While these pipelines are all below the riverbed, their precise depth must be found to ensure safe passage in the ship channel, he said.

"Channel surveys show how many feet of water are above the river bottom but finding the depth of pipelines below the bottom is also critical," Duffy added.

USACE completed the first surveys in early December and then made recommendations for the new standard draft depth to the three pilot associations on the lower river: The New Orleans-Baton Rouge Steamship Pilots Association, Associated Branch of Pilots of the Port of New Orleans and the CRPPA.

More Dredging Ahead to Complete the Job

The final phase of the project will involve moving or deepening up to six utility pipelines in the remaining 30 mi. to Baton Rouge, a USACE public affairs officer told the News-Record, with work slated to begin in June 2023. The estimated cost is $80.2 million, a price tag to be split evenly by the pipeline owners and other nonfederal funds.

Currently, the maximum draft for this section of the ship channel is still set at the original 47-ft. standard.

Besides pipelines crossing the river, Duffy also hopes to bring attention to other kinds of "invisible infrastructure," like sensors showing the air gap under bridges and current monitors. It is all part of making the MRSC not just deep enough to accommodate modern ships, he said, but reliable and resilient enough to drive the nation's economy.