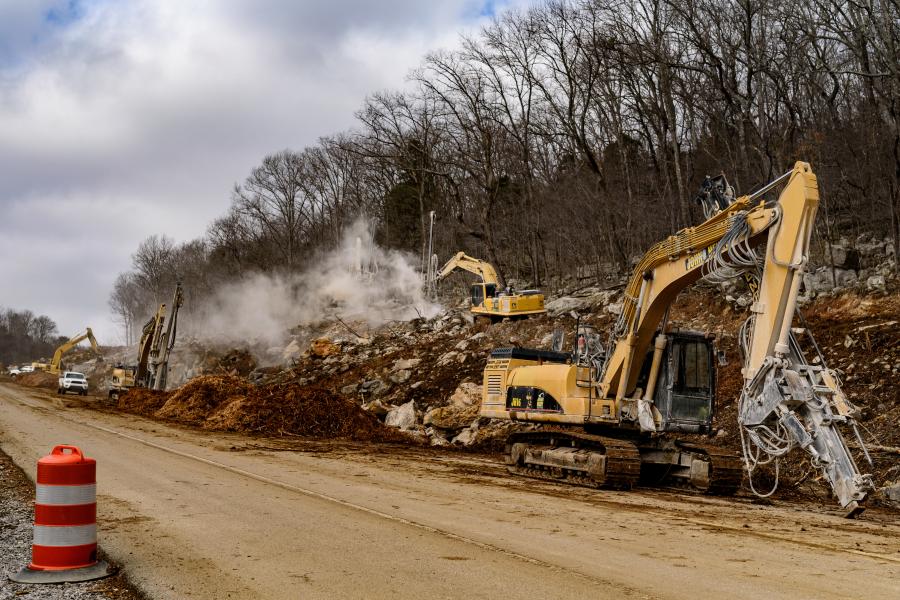 The Alabama Department of Transportation is helping to fund an $18 million project to widen Cecil Ashburn Drive in Huntsville. (Jeff White photo)

In a critical phase in the widening of a major thoroughfare, drilling and blasting continues as part of an $18 million, 3.4-mi. project in Huntsville, Ala.

"This is one of three major routes between east Huntsville and our city center," said Kathy Martin, director of engineering of the city of Huntsville. "It currently carries approximately 17,000 vehicles per day. Road closure concerns included the use of designated alternate routes and the congestion that would result on these alternate routes."

The project was designed to ease congestion and incorporate safety improvements and includes 8-ft. shoulders along each side of the roadway.

According to the city's website, Cecil Ashburn was originally designed as a four-lane road, but because of cost, only two lanes were built in the late 1990s. Future projected traffic modeling shows an increase in traffic counts to almost 30,000 vehicles per day by the year 2040. 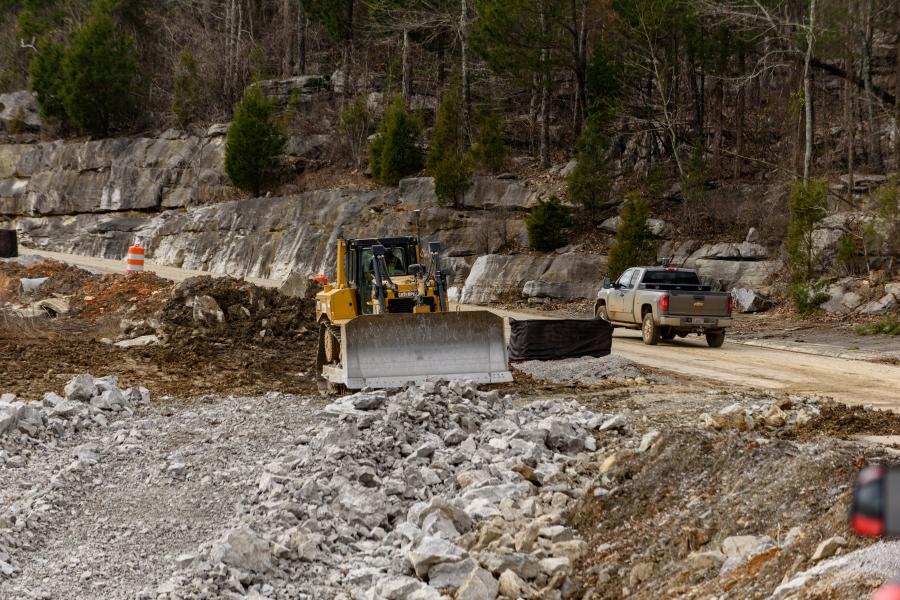 Because the roadway is at capacity and the funding is in place to share the cost with the Alabama Department of Transportation (ALDOT), Martin said now is the right time to perform the work, adding that feedback from the community has been important.

"We have a very active community on the east side of Huntsville, Hampton Cove and Big Cove, as well as many commuters from Marshall County and Jackson County who travel to Huntsville and Redstone Arsenal daily for employment," she said. "It was critical to keep our community aware of the project need, and schedule to properly plan for this change.

"Our planning and communication departments took a proactive effort in publicizing the three preferred alternate routes for those traveling in the area by utilizing public outreach and social media to distribute information. It was important that we informed motorist and employers in the area to allow work and school schedules to be adjusted and discourage motorists from using local neighborhood roads during this time.

As for reaction from the traveling public, motorists seem to have been pleasantly surprised by the travel times, Martin said.

"Many have adjusted work schedules, and others appear to be utilizing the publicized alternate routes, which have only added an average of 10 minutes to previous commute times," she said. "This is significantly better than the one-hour delay that was expected by motorists.

"The majority of the project should not affect nearby residents; however, some on the lower end of each side are able to witness the progress and hear noise. The contractor must abide by our noise ordinance, and not perform tasks that exceed the ordinance before 7 a.m. and after 10 p.m. in the area." 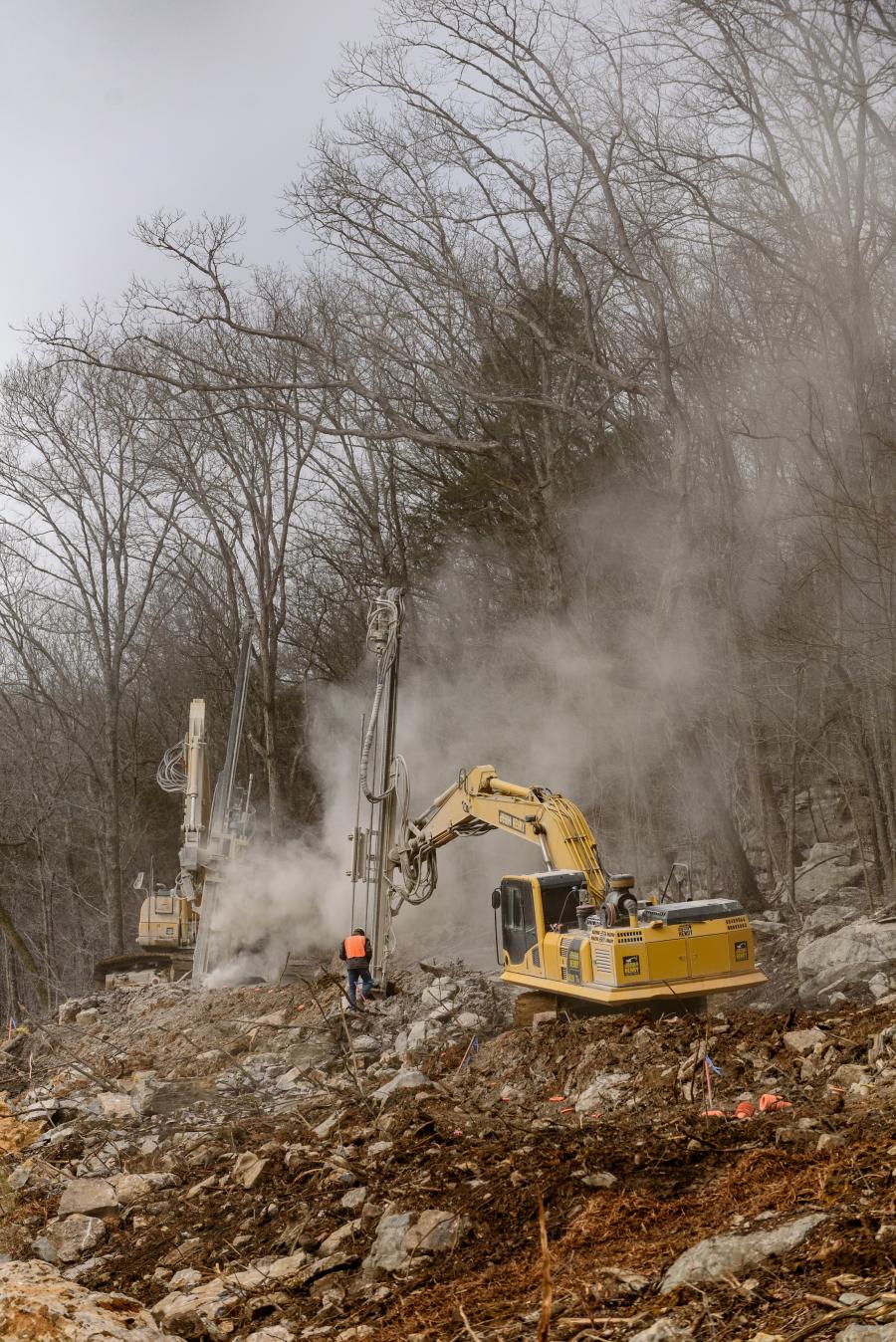 Carcel & G Construction serves as contractor on the project, which includes an incentive whereby the company may earn $30,000 per day — up to $2 million — for each day work is ahead of schedule or meets the abbreviated construction timeline.

On the other hand, the company can also be penalized $30,000 per day — up to $2 million — for each day work is behind schedule.

"It allowed the contractor to take an aggressive approach to the construction sequence, and they completed the project one year ahead of schedule," she said.

ALDOT is contributing matching funds for the Cecil Ashburn widening effort, totaling 50 percent of the costs, she added.

According to city of Huntsville civil engineer Alan Clements, innovative blasting techniques have been used as part of the widening effort.

"We thoroughly investigated the site conditions, previous construction methods that we used and considered an improved approach to the blasting," Clements said. "We utilized the same geotechnical engineer that previously performed subsurface investigations on site and spoke with many specialty contractors that had performed blasting in the area, to consider the least evasive approach to minimize damage to adjacent properties and provide a finish product that would minimize future maintenance needs."

Several drill rigs are performing blasting operations, with multiple excavators moving the excavated material and debris. The contractor is required to predrill 2.5-in. holes at 2-ft. intervals to presplit the area prior to blasting. A combination of overburden and blast mats helps ease noise and vibrations.

The drilling has consisted of a 2 ½-in. diameter presplit holes spaced on 30-in. centers, combined with an 8-ft.-by-8-ft. production pattern using the same 2 ½-in. diameter.

Work began in early January 2019 and is scheduled to be completed by the end of August 2020. Currently, crews are completing the last 15 percent of the clearing, as well as installing storm pipe, blasting rock and constructing embankments for the roadway widening. 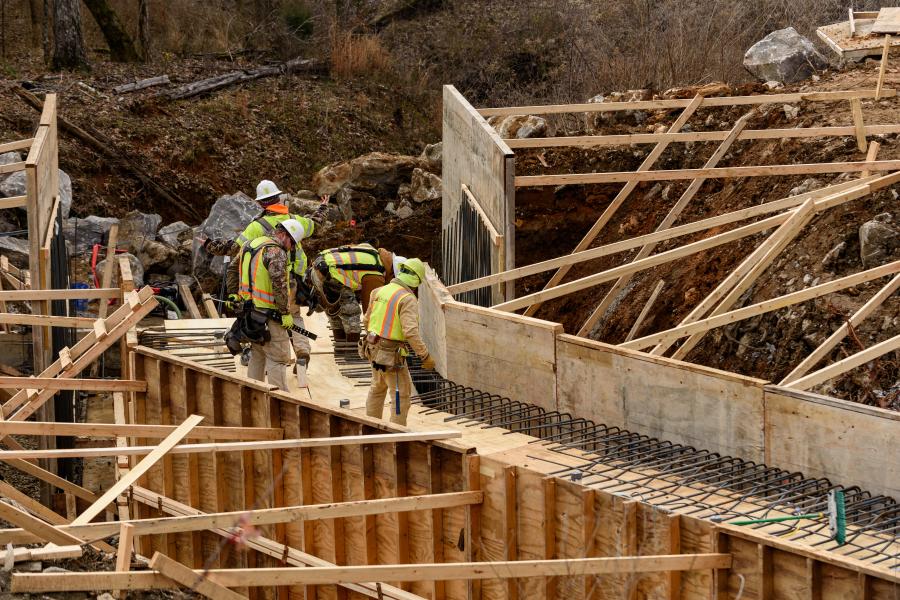 In addition to blasting, slope stabilization is considered a key task, and during the blasting process, the rock formations included clay seams in several areas not detected during the subsurface investigation, Clements said.

"The treatment has been to remove all loose and erodible materials, placement of geotextile fabric, and backfilling the over-excavated areas with shot rock generated on site," he said.

Presently, there are 25 crew members working 12-hour days, six days a week, in addition to subcontractors. Winter weather has not been a factor, since they are dealing primarily with rock excavation.

Roughly 190,000 cu. yds. of dirt and other material will be moved on the project. In total, 35 pieces of equipment are being used, including four drill rigs; two off-road, 40-ton trucks; eight excavators, three dozers and grinding and processing equipment associated with the clearing of debris.

The remaining machinery consists of rubber tire loaders and backhoes, fuel trucks and other support vehicles. 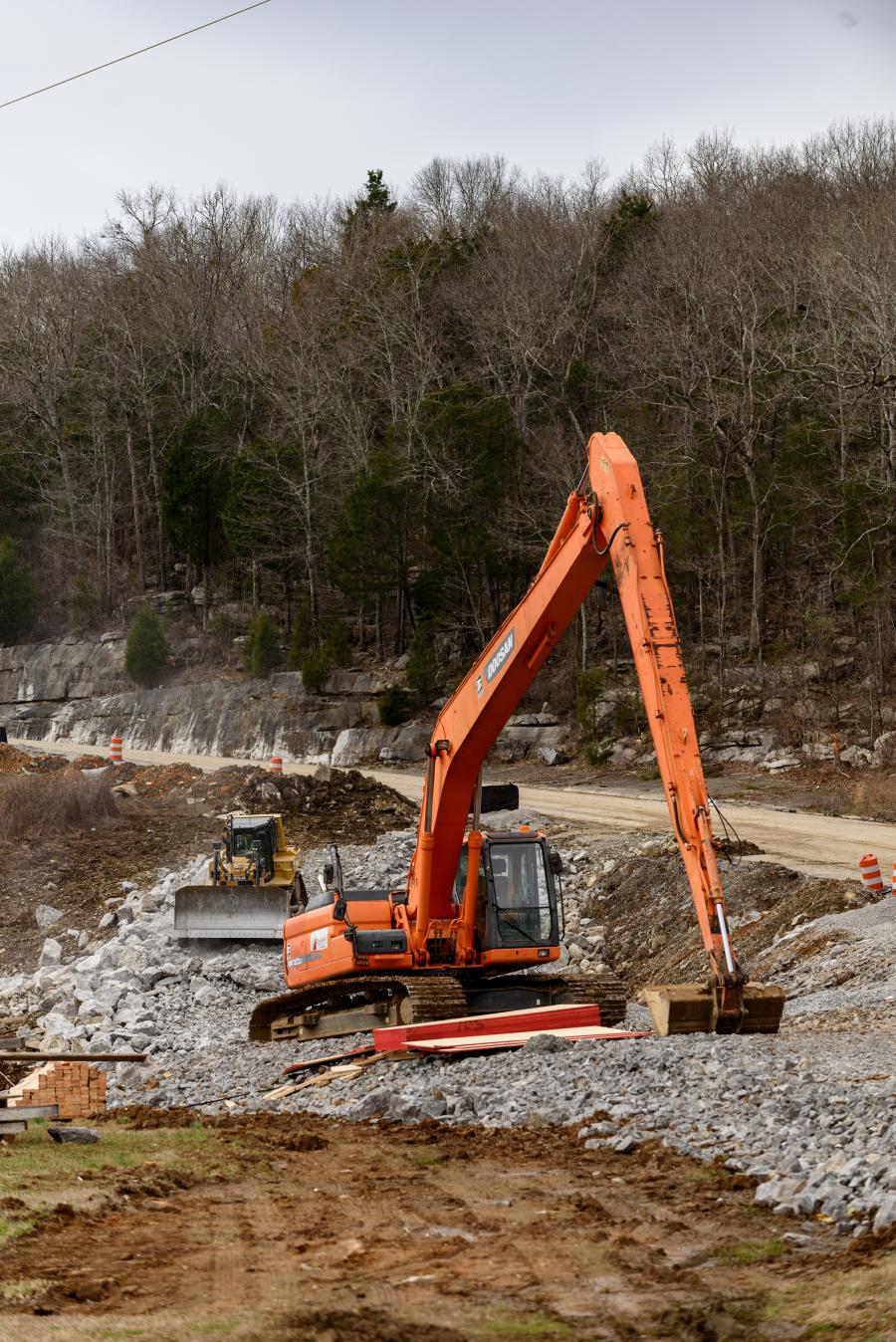 Clements said roadway improvements made to alternate routes prior to the closure have helped alleviate traffic congestion on the main routes through the area.

"In addition, the city has implemented ride-share programs, along with programming longer green phases for routes that are carrying the additional capacity, as a result of this roadway closure," he said. "The overall public response has been better, as a result of the advanced warnings, public involvement meetings, city website announcements and planning sessions."

Shane Davis, the city's director of urban development, said the ongoing construction is part of the "Restore Our Roads" program, which is the first of its kind in the state.

"It allows the state and the city to partner in $250 million for major roadway infrastructure in the city, that otherwise would have been cancelled or not performed due to a lack of federal/state funds. We are extremely appreciative of ALDOT's participation in the agreement to move our infrastructure forward, as the city continues to grow." CEG