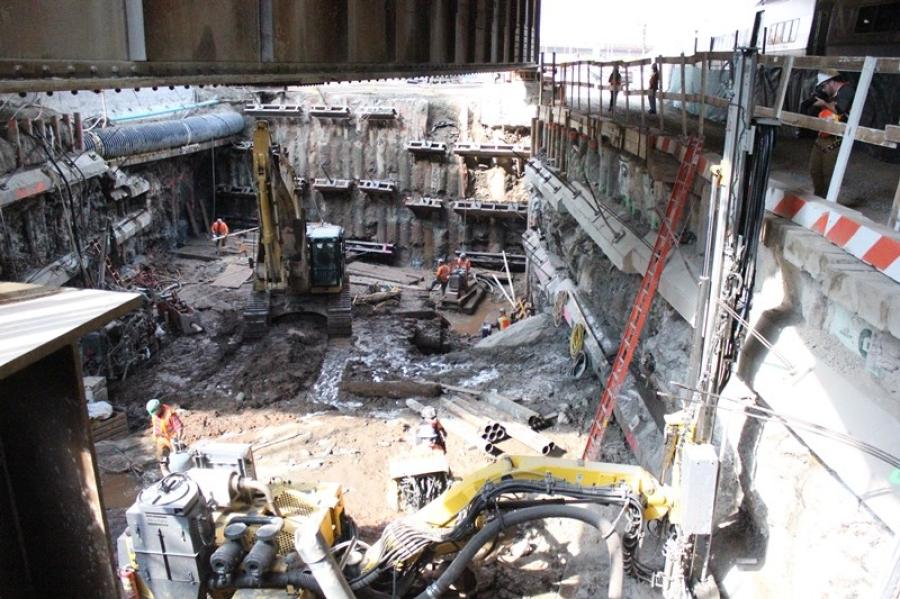 Construction on the first two sections of the Hudson Yards Concrete Casing was completed in 2017. (GDC photo)

The Gateway Development Commission announced in March that Amtrak has awarded a contract and work has begun on behalf of the Gateway program to relocate utilities out of the future path of the third and last section of the Hudson Yards Concrete Casing in Manhattan, N.Y., a part of the Hudson Tunnel Project.

The commission is a partnership made up of the states of New York and New Jersey and Amtrak.

The $25 million early work project is the latest step in preparing for the full construction of the new Hudson River Tunnel and rehabilitation of the existing tunnel. The advance construction project will create jobs and provide an economic boost as the region continues to work through the COVID-19 crisis.

Crews have taken initial steps on the early work project, including conducting testing and digging of pits and materials staging. The project is expected to be completed during the fourth quarter of this year.

Planned in collaboration with the Long Island Railroad (LIRR) and its related companies, the utility relocation project involving LIRR's Emergency Services Building is a critical path activity that allows future construction of the concrete casing itself. The advancement of utility relocation was a key recommendation received from the private sector during the Gateway Partners' Request for Information process to reduce project risks and unknowns during full construction. The development of the future construction of the final section of the concrete casing is continuing.

Frank Sacr, interim executive director of the Gateway Program, said, "With New York, New Jersey and Amtrak fully committed to Gateway, and a stronger federal partnership finally in place, we are excited about getting the Hudson Tunnel Project fully under way. That means taking the steps we can now to ensure the project is ready to build. Critical path items like utilities relocation are absolutely an essential part of that responsibility, as well as providing much needed jobs and economic activity immediately."

To protect the future rail right-of-way under the Hudson Yards development complex, two sections of the concrete casing were built underground in the block bordered by 10th and 11th Avenues and 30th and 33rd Streets. Construction of the first 800-ft. section (between 10th and 11th Avenues) began in August 2013. The second section extended the project west another 105 ft. under the 11th Avenue viaduct in Manhattan. Both sections were completed in 2016.

This next step involves extending the casing on a diagonal alignment from 11th Avenue to 30th Street, where it will link up with the new Hudson River Tunnel. The third section of the Hudson Yards Concrete Casing can be advanced ahead of the new Hudson River Tunnel because it has completed the necessary environmental review processes as a right-of-way preservation project.

The Hudson Tunnel Project will fit out the entire Hudson Yards Concrete Casing with rails, signals, and other infrastructure.