ECA Reins in 100 Years in Business After Three Generations 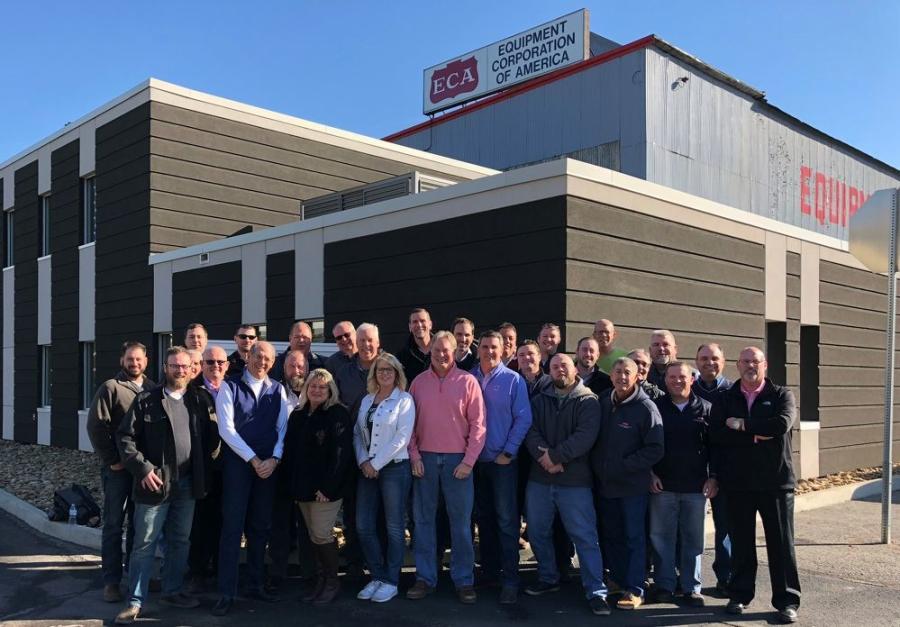 The ECA team gathered at the Coraopolis, Pa., headquarters for the 2018 Annual Sales Meeting.

Equipment Corporation of America (ECA), a distributor of specialty foundation construction equipment, celebrated 100 years as a third-generation family-owned business in March 2018. During that time, it has morphed from a small purveyor of World War I surplus equipment to a large international dealer for the most advanced foundation equipment in the world.

The ECA story is one of weathering poor economic conditions, adapting to changing trends, acquiring the best in foundation equipment, treating customers with respect and giving employees the freedom to excel within a flat organizational structure.

ECA was formed in 1918 through the consolidation of three Chicago-based companies that had come together to remanufacture post-World War I surplus equipment. They assembled a fleet of construction, material handling and industrial equipment under the identity of Equipment Corporation of America.

Len Kern was hired as a secretary in the typing pool at the Pittsburgh, Pa., location in 1921. As he climbed through the ranks, the firm increased its focus on pile driving equipment. By 1959, Len strategically bought out 54 shareholders since being hired and took control of operations, marking the start of ECA's reign as a family-owned business.

ECA specialized in repairing and refurbishing used equipment and then renting and selling it during Len's tenure. His son, Al, changed course. Al had studied civil engineering at the University of Pittsburgh and applied that knowledge on the construction and maintenance of cellular piers in Florida and Hawaii just after the Korean War. He came to ECA in 1962 and took the helm when Len died in 1965. Under his leadership, ECA built relationships with manufacturers and began distributing new equipment. Al also focused on customer service and expanding the firm's locations.

Al's son Roy would take things to a new level, transforming ECA into a global distributor. Roy and his brother Dennis had gotten a taste of the equipment business working as mechanic's helpers during high school. Although Roy asserted his independence by working as a financial analyst at Chicago's Container Corporation of America, he returned to ECA in 1986 to sell equipment. Armed with an MBA, a Bachelor of Science in Mechanical Engineering, hands-on financial experience, and an outgoing personality, he was positioned to take ECA to the next level as CEO in 2000.

Empowering Employees in a Flat Organization

While ECA's success has unfolded under the leadership of the Kern family, Roy defers the credit to his team.

“I'm more of a consensus builder than a top down leader,” he said. “They [employees] all have skill sets and talents and it's important to let that shine, prosper from it, and allow people to do their thing.”

Roy's father had a similar leadership style. ECA President Ben Dutton experienced this mindset when Al gave him the reins of the Philadelphia branch as a “29-year-old kid.” His counterparts in Pittsburgh and Washington D.C., Bill Rose and Pete Schell, were afforded the same level of authority.

Ben said: “I think that philosophy still exists. People come here and stay because they know they are respected at all levels, not just at the top management.” ECA's branch managers to this day help shape personnel, organizational, and marketing decisions.

A common theme among the ECA team is a recognition and appreciation that the foundation construction business allows them to be part of something bigger. Roy ticks off a seemingly never-ending list of projects for which ECA supplied foundation equipment: World Trade Center, Vietnam Memorial, Jefferson Memorial, Hoover Dam, Washington Metro System, the Big Dig, the Toronto subway system, and nearly every stadium east of the Mississippi. He said: “We've been all over the place and it's very gratifying to look at that finished product and realize that we provided the equipment.”

ECA goes well beyond the standard safety committee meeting to keep its people safe as well.

“Safety has always been really important to us,” Roy explained, “but we doubled our efforts in recent years and hired a safety consultant. We put our money where our mouth is.”

The safety consultant conducted an in-depth assessment of ECA's nine facilities. The results were turned into a comprehensive safety plan and a manual for all employees.

ECA's investment in safety has not gone unnoticed. The firm earned the coveted BAUER Manufacturing Regional Service Center Certification Award in 2017. Among the criteria considered in this rigid audit of its six service facilities was updated safety equipment. In 2016, ECA Canada was recognized by ADSC-IAFD for achieving a zero-incidence rate in the Less Than 50,000 Man Hours Worked category. 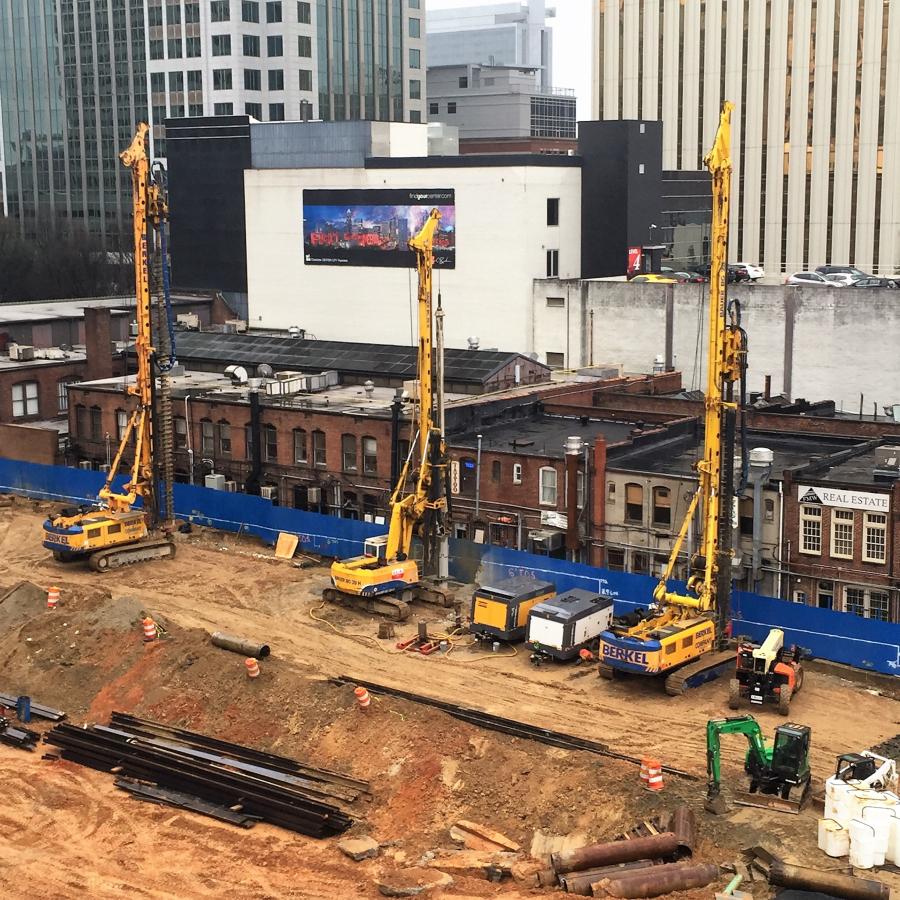 “What has helped the company over the last 100 years is our ability to evolve,” said Roy.

ECA spent the first part of the century providing and rebuilding World War I surplus equipment such as boilers, steam locomotives, steam hammers, hoists, and derricks. As electric and diesel supplanted steam, ECA shifted its equipment lines to stay current.

ECA earned a reputation for strategic expansion by opening new locations in the eastern United States and Canada, and partnering with leading manufacturers of foundation equipment around the world. Its lineup reads like a who's who in global foundation equipment: BAUER Maschinen, KLEMM Bohrtechnik, Gilbert Products, ALLU, BAUER-Pileco, Betek, HPSI, Dawson, MAT, WORD International, Berminghammer and Prakla.

ECA expects all employees to stay on top of industry trends. “One of the things we look for in our employees, especially outside salespeople, is to keep a pulse on the industry and keep management informed,” Kern said. “That's actually written into their job descriptions.”

ECA's drilling equipment specialty was born under Al Kern. “I give my dad credit for getting us involved in the drilling industry in the 1980s before it was popular.” Kern said. “He got a head start, especially with small-diameter drilling.”

Roy tapped then-Vice President of Sales and Marketing Ben Dutton prior to 2000 to discuss a deeper move into the international drilling market and the two spearheaded a strategy. Ben summarized: “The first thing was to change the vision and the second thing was to really get out and build our identity in the new industry we were going to develop. We then filled it with key products and strong manufacturers.”

Roy then faced a trial by fire scenario after becoming CEO in 2000. Air pile hammer demand in the northeast United States dried up unexpectedly and ECA was stuck with more than 200 pieces of obsolete rental equipment. The trend had shifted rapidly toward diesel and hydraulic hammers and drilling. ECA took a hit, but managed to step up investment in drilling equipment and sell off its air hammers over time.

Roy and his team recognized that the highest quality foundation equipment was being manufactured in Europe. Today ECA carries foundation equipment from several BAUER Group subsidiaries including KLEMM Bohrtechnik, RTG, BAUER-Pileco, MAT, and Prakla. That relationship started with a $5-million check written by Roy to Professor Thomas Bauer in 2004. It was a fun memory for him and a pivotal moment for ECA as a firm.

ECA's annual trips to Germany during Oktoberfest each year have become coveted among the firm's loyal customers. Each year, it funds and organizes the trip, which includes BAUER and KLEMM factory tours, jobsite visits and an authentic Oktoberfest experience in Munich for up to 20 customers. The ECA team relishes the camaraderie with customers and also giving them a front-row seat to watch its manufacturers in action.

ECA was on the leading edge of the Canadian expansion by acquiring Special Construction Machines of Toronto, Ontario in 1999. The firm immediately sold several large-diameter drilling rigs, but really got traction in 2004 when picking up the BAUER line. ECA retained Special's 16-year veteran Ray Kemppainen and named him branch manager, a position he holds to this day.

“BAUER manufactures a product that revolutionized the use of segmental casing and that's how we picked up the huge market share we have in Eastern Canada,” Roy said. “It was a natural fit to bring this technology to the Canadian market and the timing was perfect.” 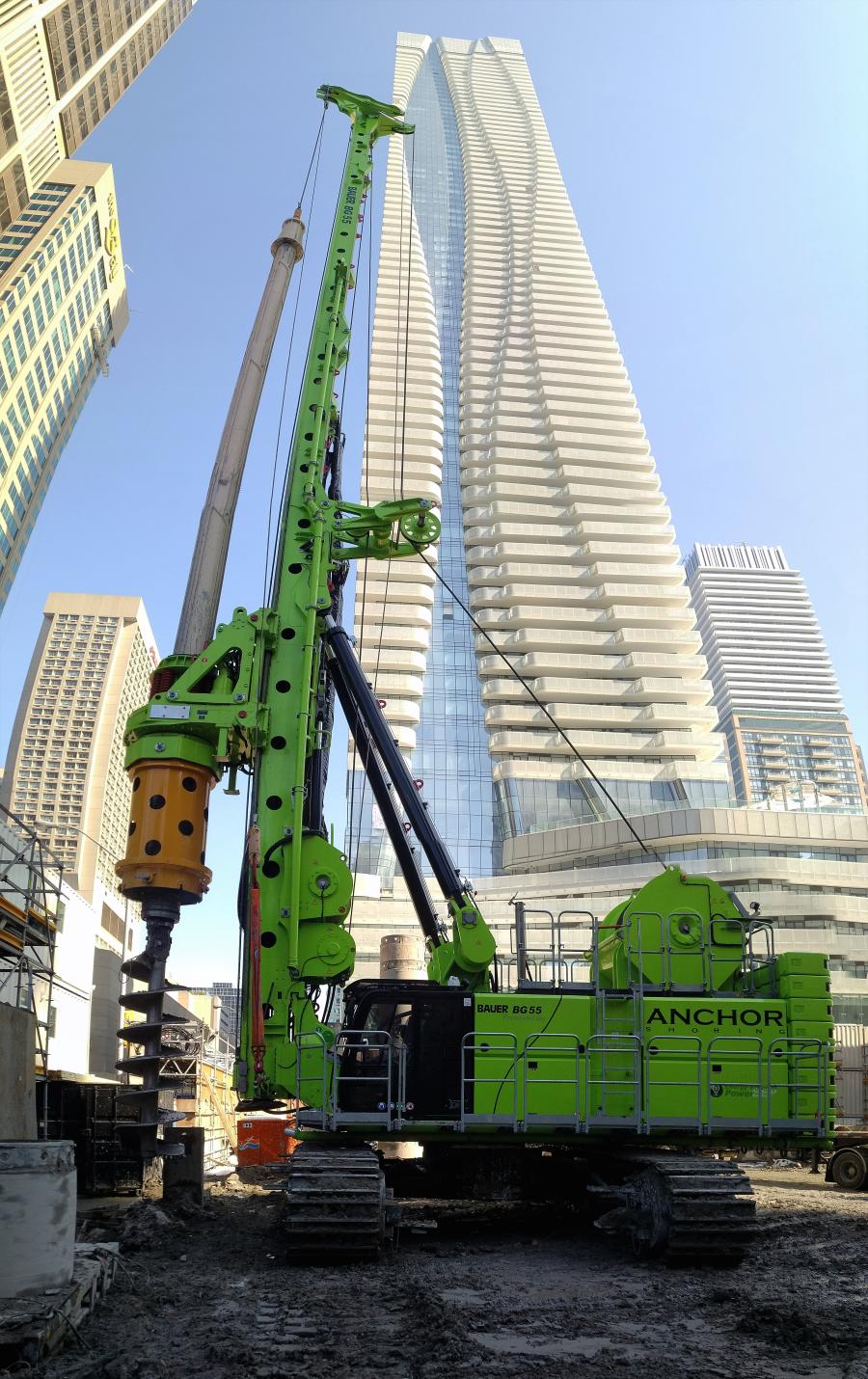 ECA deepened its commitment to the Canadian market in 2012 by building a new facility stocked with its full line of equipment to house 16 employees and more than $4 million in parts. It has supplied many high-profile projects, the most recent of which is the Eglinton Crosstown Light Rail Transit (LRT) project in Midtown Toronto, where Deep Foundations Contractors is running several BAUER and KLEMM Drilling Rigs. Other projects of note have included Toronto-York Spadina Subway Extension, Toronto Subway Expansion, Muskrat Falls Hydroelectric Dam, Burgoyne Bridge Replacement, and Montreal's Champlain Bridge Replacement.

ECA's plans to maintain a steadfast commitment to Canada. The only expected change will be to eventually increase its presence in Quebec.

Selling With Integrity and Giving Back to the Industry

When asked about the three keys to ECA's success, Roy has three words: 1.) people, 2.) integrity, and 3.) service. His fondest memories involve good times and friendships with customers and employees.

ECA has an assertive sales team of 26 employees constantly on the move pursuing new business, but they're known by customers for taking a subtle, helpful approach to selling equipment.

ECA views customers as partners. Ben explained: “Our approach isn't to make money on the sale. It's to help our customers make money.”

Roy added that ECA sells high-end products to a very specific customer. “We deal with more sophisticated buyers who understand the advantages of quality,” he explained. “You have to believe in the quality that's there, and we've proven that time and again, so most of our sales are repeat business.”

This philosophy carries over to how ECA services equipment. Roy said: “We've always had a policy: we fix equipment first and then we worry about the money. In other words, we focus on getting the customer up and running regardless of who is responsible for the machinery being down.”

Staying current with evolving technologies on the market's most sophisticated foundation equipment is ECA's biggest challenge. It requires highly competent employees, close manufacturer relationships, and ongoing training. ECA's in-house trainers in the areas of drilling, pile driving, and small-diameter drilling, are coached by its manufacturers. They, in turn, conduct training for fellow employees and customers.

At a time when many trade associations lament over declining participation, ECA has multiple employees giving back to the industry. You can find them serving in virtually every capacity in associations such as the ADSC-IAFD, Deep Foundations Institute, Pile Driving Contractors Association, and Associated Equipment Distributors.

“One of our values,” Roy explained, “is to promote and enhance the industry and we work hard at doing that. Our main avenues are providing customer feedback to our manufacturers to keep them at the cutting edge of technology, and also being active members in the trade organizations that affect our industry.”

The Future of ECA

Kern is not so bold as to make predictions about ECA's future, but he has a pragmatic understanding of why the firm is rocketing past the 100-year mark.

ECA has evolved into a large and complex enterprise over the past century, but Roy has not lost sight of its greatest achievements: long-term employees, relationships with customers and manufacturers, and the ability to adapt and survive. He also recognizes the importance of succession planning from the corporate office to the branches. As he thinks back to 1921 when his grandfather worked in ECA's typing pool, Roy believes Len would be enamored by the quality and quantity of his employees, business savvy, technical advances, and financial position.

“I would hope that the company continues to take care of its customers and employees and adapts in any way it needs to,” he said. “I'd like to believe we would be at the cutting edge of technology and remain very service and customer oriented.” Based on the past 100 years of ECA's history, the odds are high that he will be right.