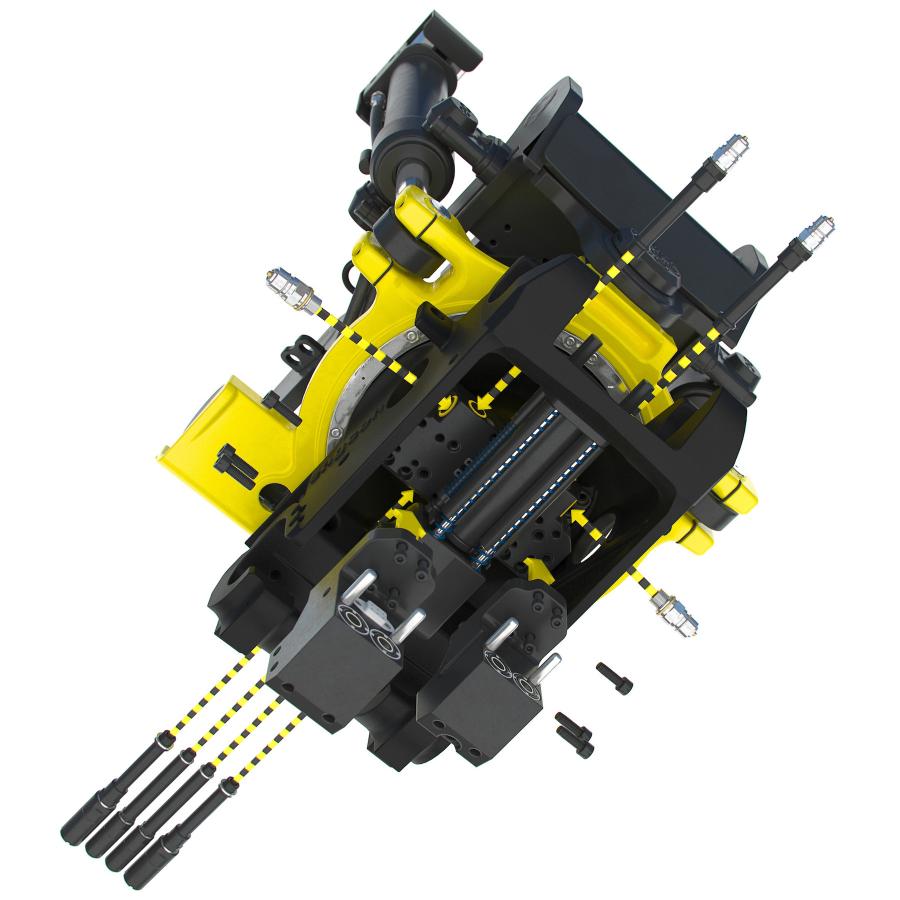 Two of Engcon’s products — the GRD, a detachable grab cassette, and the SWD, a detachable brush sweeper — can now be retrofitted entirely without hoses.

Engcon, a leading manufacturer of tiltrotators — a kind of tilting and rotating quick coupler for excavators — has made its products smarter, more service-friendly and even easier to use, according to the manufacturer.

Engcon, a $90 million Swedish firm, has been manufacturing and selling its tiltrotators, quick couplers, control systems and tools for excavators throughout Europe and Australia for 28 years, and in North America for 12 years through dealers.

Now it announced that two of its products, the GRD, a detachable grab cassette, and the SWD, a detachable brush sweeper, can now be retrofitted entirely without hoses. The modular hose-free design provides simplicity and an uncluttered quick hitch. Because the block is directly attached without the need for hose runs, retrofitting Engcon's EC-Oil automatic oil connection system has become extremely easy. And it's just as easy to install and retrofit EC-Oil to the GRD and SWD devices, according to the manufacturer.

"This development is part of our unique modular concept, offering the customer a basic product to which additional functions are easily added later. To say we've succeeded is an understatement," said Fredrik Jonsson, head of development at Engcon Group.

In parallel with the development of the new modular tool attachment, Engcon also has developed a new high-flow swivel that allows hydraulic flows up to 200 Lpm. This is achieved by directly feeding the hydraulic function without first passing it through the tiltrotator valves. The new high-flow swivel has a separate leakage oil channel, which makes it possible to drive leakage oil via the tiltrotator.

Jonsson explained that the hoseless modular system was designed jointly with technology consultants, end users and Engcon's inhouse R&D department. A key requirement was for it to be easy to retrofit EC-Oil, Engcon's automatic oil connection system that allows the excavator operator to remain in the cab while connecting hydraulic tools.

"We began by laying out EC-Oil on a drawing board, then studying it to ensure the quick hitch and hoseless design would be simple and easy to service," he said.

"This forced us to think along entirely different lines and a few years ago we jointly established the objective of offering an uncluttered, service-friendly quick hitch beneath our tiltrotators. It makes Engcon unique in that no other company can offer a hose-free automatic hydraulic connection system — no hoses to abrade or burst means less downtime, fewer engineer call-outs and greater profitability," Jonsson continued.

Following many successful prototype tests, Engcon has succeeded. Preproduction quick hitches will begin rolling out of the factory in Sweden this summer. Production delivery, beginning with the QSD60 (S60) and QSD70 (S70) sizes, will begin in the fall, with other sizes to follow.