Engineers: Lives Lost in Mexico Quake Could Have Been Saved 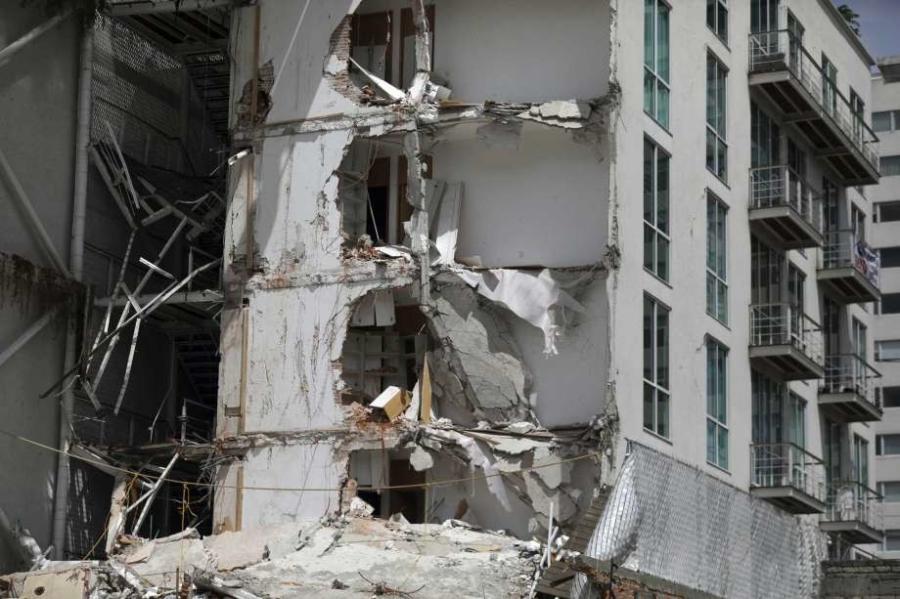 This Sept. 24, 2017 photo shows an apartment building that was partially destroyed during the 7.1 magnitude earthquake, on Emiliano Zapata Avenue in Mexico City. The eco-friendly apartment building with its wood-paneled balconies and a solar-paneled roof collapsed when a corner column failed, and the flat-slab structure pancaked, said Eduardo Miranda, a professor of civil and environmental engineering at Stanford and global expert on earthquake-resistant design. (Photo Credit: AP)

Nearly two-thirds of the buildings that collapsed in Mexico City's monstrous earthquake last month were built using a construction method that is now forbidden in seismic hotspots in the United States, Chile and New Zealand, according to new data compiled by a team of structural engineers at Stanford University.

The suspect building technique called flat slab — in which floors are supported only by concrete columns — caused 61 percent of the building collapses in last month's magnitude 7.1 quake, which killed 369 people and blanketed tree-lined avenues in rubble.

Now, several prominent engineers say some of those structure failures could have been prevented and lives could have been saved had Mexico City officials only gone forward with a proposal to forbid that type of construction when they toughened building codes after the 1985 earthquake in Mexico's capital.

"We have known for 30 years that this system killed lots of people, so why are we still using it?" asked Eduardo Miranda, a professor of civil and environmental engineering at Stanford and global expert on earthquake-resistant design who compiled the data obtained by The Associated Press. "The right decision after '85 would have been to completely ban this kind of construction. We could have saved lives."

Anahi Abadia and her husband were among the fortunate: they were in Home Depot when the earthquake hit, shaking the store so fiercely the structure screeched. Minutes later, a text came in from their neighbor: The elegant apartment they had purchased only six months earlier had collapsed, rendering their new home a pile of crushed concrete.

The concrete slabs used to build floors and ceilings can be cast to include some rebar for reinforcement, and give builders greater flexibility in room layout and allow for higher ceilings.

But in an earthquake, without reinforced concrete walls or lateral bracing to resist forces pushing structures sideways, buildings with that design can move too much. The columns, and connections between the slabs and columns, can easily break, prompting collapse, as was the case at a school where 26 people died, most of them children.

But at Abadia's building, the construction method was only the start of the problems: The units were designed by an architect whose license lapsed, and approved in a borough where auditors previously found illegal construction occurred unchecked.

Experts concur that the devastation caused by last month's earthquake in the city of 8.9 million people could have been much worse had the building codes not been so strong, but it also has forced an uncomfortable conversation about their shortcomings. Now, as experts race to toughen standards to retrofit hundreds of damaged buildings, they are grappling with the reality that corruption has allowed hundreds of structures to be built outside the rules atop the soft soils of Mexico City's ancient lakebed.

In the crisis following the 1985 quake, a group of academics, building officials and engineers drafted emergency recommendations to strengthen Mexico City's seismic codes, which were swiftly passed into law.

Some architects and builders were opposed to an outright ban on flat slab construction, said Miranda, who wrote reports that informed the committee.

"There were lots of builders and owners who were not going to be happy that you just stopped their construction," said Miranda, who later served on Mexico's code committee in the 1990s, and on committees funded by the U.S. Federal Emergency Management Agency. "These things start as technical conversations but then you run into policy and politics."

The new codes allowed flat slab construction if developers designed the building to be seismically stronger than structures with beams or concrete walls.

"It would have been better to have insisted very much about not using flat slab," said Roberto Meli, a renowned structural engineer who served on the code committee in 1985, and went on to head the federal Center for Disaster Protection founded after that quake.

The new codes gave more responsibility to a network of private engineers who are hired and paid by developers, and who submit structural plans to borough authorities. In practice, that means private engineers — not government experts — vet projects' structural safety, and corruption can intervene.

"Corruption can come in many forms, from the moment someone accepts a bribe to when someone falsifies documents, or fails to present the right structural plans to borough authorities," said Renato Berron, head of the Institute for the Security of Constructions of Mexico City, a city agency.

In recent decades, middle-class enclaves close to the city's center have experienced vertiginous growth, and many unpermitted helipads and illegal, multi-floor garages have sprouted up between historic homes. In the last 15 years, residents of Abadia's Benito Juarez borough and two others nearby have sent in the highest number of complaints about land-use violations to a city watchdog agency.

Now, those same boroughs are home to dozens of damaged buildings, according to data from the Mexican Society of Structural Engineering. Miranda, whose team compiled the data on the 44 collapses through in-person visits and detailed structural analysis, estimates that hundreds of damaged buildings were built with flat slab systems, including some built relatively recently.

Meli said he and the committee will seek to strengthen retrofitting standards first, and by early next year may reexamine flat slab, although he is not convinced prohibiting the method outright would have worked.

Abadia said she hopes shoddy builders will be held responsible.

"A new building should not fall down," she said.