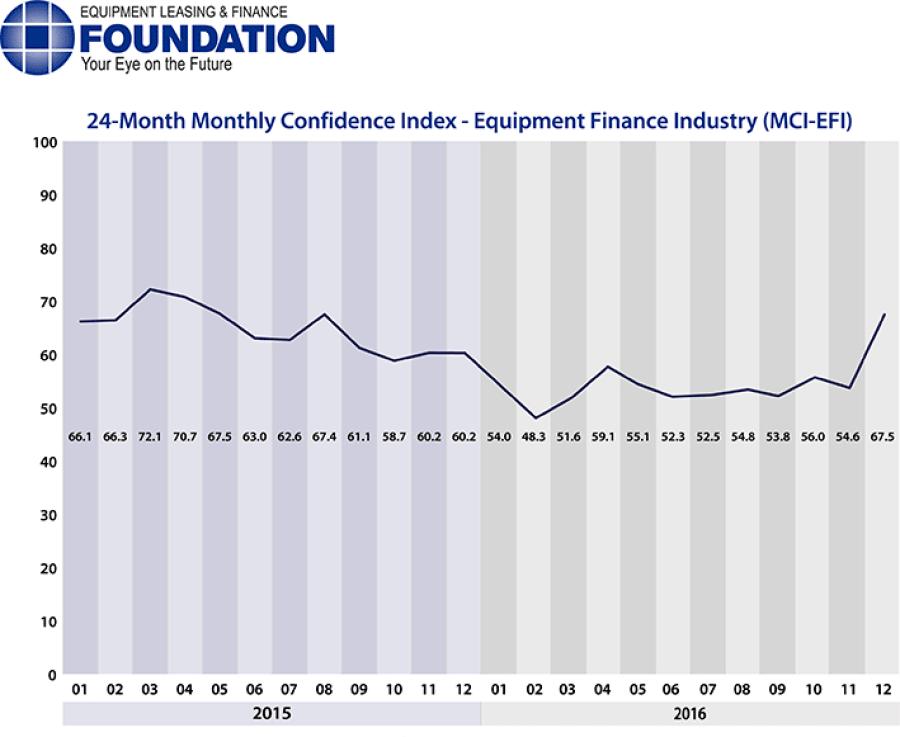 Designed to collect leadership data, the index reports a qualitative assessment of both the prevailing business conditions and expectations for the future as reported by key executives.

The Equipment Leasing & Finance Foundation (the Foundation) releases the December 2016 Monthly Confidence Index for the Equipment Finance Industry (MCI-EFI) today. Designed to collect leadership data, the index reports a qualitative assessment of both the prevailing business conditions and expectations for the future as reported by key executives from the $1 trillion equipment finance sector. Overall, confidence in the equipment finance market is 67.5, a sharp increase from the November index of 54.6, with equipment finance executives expressing post-election optimism.

“The results of the election should lead to a more favorable business environment over time. The anticipation of this has already had a positive impact and is beginning to shift the mindsets of business leaders and investors. I am concerned about the potential negative impact the anticipated tax reform may have on our industry segment.” Robert Boyer, President, Susquehanna Commercial Finance, Inc.

“I'm hopeful that we are moving into a more favorable business environment which will create a more optimistic outlook. Certainly having the election behind us is less of a distraction.” David T. Schaefer, CEO, Mintaka Financial, LLC

“I believe that with the election now over there will be a more stable and hopefully a more positive business environment, which will translate to an increase in financing opportunities.” William H. Besgen, Senior Advisor, Vice Chairman Emeritus, Hitachi Capital America Corp.

Survey results are posted on the Foundation website, http://www.leasefoundation.org/research/mci/ , included in the Foundation Forecast newsletter and included in press releases. Survey respondent demographics and additional information about the MCI are also available at the link above.