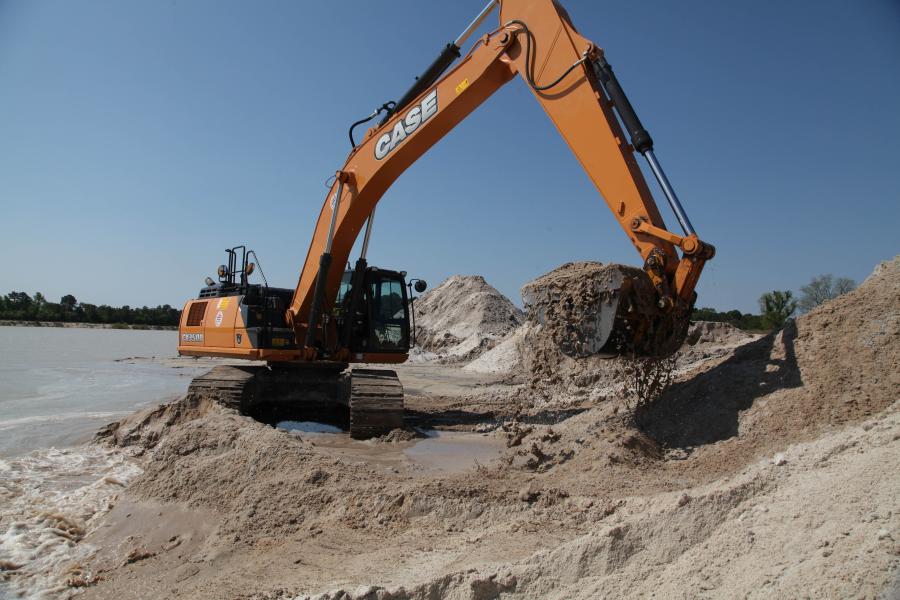 As the construction industry in the Carolinas continues to improve, the company needed to add capacity to its raw material production that supports its fieldwork — the company owns and operates a sand pit locally that feeds all of its sites.

E.R. Lewis Construction Company, located in Pitt County, N.C., has been in business for more than 60 years. Starting out as a small, family-owned business with only a handful of machines, the company has evolved into a force that has tackled everything from agricultural development and subdivisions, to commercial work and highways. The company was founded in 1958 by Eldridge R. Lewis. In its early days, his son Harvey would go to school in the mornings and work for his father in the afternoons. It's been a way of life for him ever since.

As the construction industry in the Carolinas continues to improve, the company needed to add capacity to its raw material production that supports its fieldwork — the company owns and operates a sand pit locally that feeds all of its sites. There, the company excavates sand out of 15-ft. (4.5 m) of water, lets it dry and then uses it on its job sites. Lewis added a new Case CX350D excavator from Hills Machinery to accomplish this in late 2015.

The sandpit requires loading a large number of trucks every day, and E.R. Lewis needed a machine that is quick and can load trucks fast.

“I noticed right off the bat that [the CX350D is] a whole lot faster,” said Johnny Garris, an operator of E.R. Lewis who has been in the industry for 35 years. “Most of the time, when you're loading a truck, it takes like a minute or a minute and 15 seconds. With this one, you can actually load a truck every 45 seconds with it.”

For a company with a growing amount of business, that speed was critical. As Garris said, “The more production you get, it's money ahead.”

The CX350D has three power modes (speed priority, heavy and automatic), which provide the ideal mix of power and fuel efficiency to match application needs. E.R. Lewis runs it in the speed priority mode instead of heavy, and achieves the production they need while saving considerable money.

“It's more economical. I've run them on high, I've run them on medium, and I know there is a difference because it changes the hydraulics. On high, you're supposed to have more hydraulic pressure. Well, it basically does the same thing on SP and burns a whole lot less fuel. It makes more sense in our sand to run it [at that setting],” said Garris. “The less expensive it is to operate it, the more money my company makes.”

One of the other features that E.R. Lewis appreciates is the machine's power. The excavator has a new electronically controlled hydraulic pump, a larger control valve and new solenoid valves — all of which help boost breakout force, increase lifting strength and improve responsiveness.

“It's strong. It's got plenty of breakout power,” said Garris. “When you get down in that water, that sand is really tight. Most machines with a bigger bucket don't have the breakout power that this machine has. You can't even tell the difference that it's in the dirt; it just comes out on up…It's a pretty good machine.”

Though powerful, the machine still offers smooth operation — a necessity when loading trucks with tons of sand every day.

“It's like sitting at home, running a video game,” Garris said. “It's really comfortable. It's really smooth, and not hard or bad on your hands. You can sit in it and run it all day long, get out and go home, and you can't even tell you've been to work.”

The company also has taken note of the fuel efficiency of the CX350D compared to the previous generation machine it operated.

“The fuel economy is one of the biggest assets so far,” Lewis said. “We've kept track of this machine, and how many hours it runs, how many gallons does it take. And for [producing] the same amount of work it's getting about 30 to 40 percent better fuel economy. That's big because of the price; we all know how expensive fuel is.”

Garris thinks the excavator is incredibly economical for the company.

“When we run [a machine], it's loading trucks pretty heavy; it doesn't get a break in a 10-hour period,” he said. “We've had some machines where we've had to come back and fuel up twice a day. This one right here, I believe it would actually run a couple of days on a tank of fuel.”

Seeing All the Details

Handling a larger workload not only takes efficiency, but also a high level of comfort. With operators working longer hours, it's important for them to feel comfortable in their machine.

“Comfort is important because, if you're working that hard and you're not comfortable, you get irritated, you get tired, and sooner or later, it will beat you down,” said Garris. “With this machine, you come to work, you get on it, and you run it all day. It makes a big difference. It really does.”

The CX350D provides more cab space and more legroom. It features an air-ride seat that's larger to reduce pressure points, as well as slides forward and back, tilts back 65-degrees, has an adjustable lumbar system and a built-in heater.

He also recognizes the importance of a machine's visibility. In the past, Garris has operated a few machines that had blind spots both in front of the machine and behind it — something he considers a huge safety hazard. He hasn't had that problem with the CX350D excavator.

Part of the CX350D's 360-degree visibility is due to its standard rearview camera that's always displayed on the cab's 7-in. (17.8 cm) monitor and optional side-view camera.

“Visibility is a big key factor in a piece of equipment,” said Lewis. “It's safer for number one. Then you get into the fact that being able to visually see what you're doing is only going to help you do it better.”

With its power, speed, fuel efficiency and abundance of comfort features, the CX350D is a helpful companion to E.R. Lewis' growth and future success.

“You take a look at our fuel economy, you take a look at the power, the number of reps a piece of machinery will do in a shorter period of time, which equates to production. At the same time, you want to be able to do it safely. You want to make sure that piece of equipment does what you bought it for,” said Lewis. “All in all, we think it's going to be a great machine for us.”

Lewis attributes a big part of that to the company standing behind the equipment: Hills Machinery.

“I'm very satisfied with Hills,” he said. “They've got one objective, and that's satisfying the customer, and if it's not right, they'll do it right, so I can't ask anybody else to do any more. That's the way I do business.”