Fabick Cat Works Around the Clock to Prepare for Visit 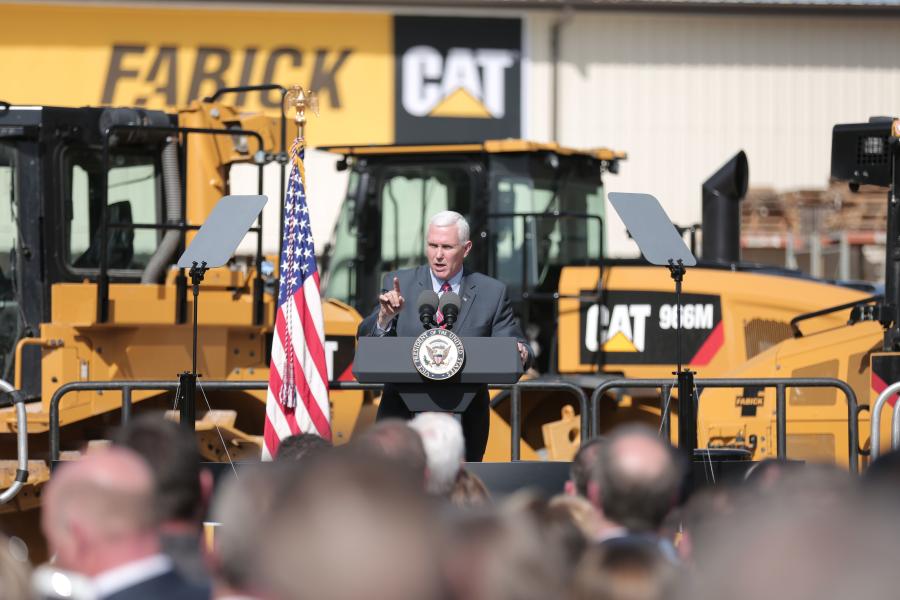 He was joined by Missouri Gov. Eric Greitens as he participated in a round table discussion hosted by the company's CEO, Doug Fabick. After meeting with Fabick executives and a small group of other St. Louis area business leaders, the Vice President took a brief tour of the facility where he spoke with a number of Fabick technicians as they demonstrated the work they do servicing Caterpillar equipment.

His visit to the dealership was capped off by formal remarks to a group of more than 400 company employees and invited guests. Gov. Greitens introduced the Vice President.

“This was an incredible honor for Fabick Cat and all of our employees,” said Doug Fabick. “It was an amazing way to help kick off our Centennial Anniversary. One hundred years ago this year, John Fabick Sr. founded the company that has grown to become one of the largest and most successful Caterpillar dealers in the world. Vice President Pence's remarks on streamlining government regulations and helping small businesses succeed was a very welcome message for our company and our customers,” Fabick said.

A visit from the Vice President of the United States is no small undertaking. “We first learned that Fabick Cat had been confirmed to host Pence on Saturday, February 18, and a few hours later we were in full-on planning mode,” said the company's Vice President of Marketing, Tom Svetnicka. “Accommodating the needs of the White House staff and Secret Service was an effort that consumed our Fabick team day and night in the limited time we had to prepare. The level of security and intensity of planning was everything you would imagine, and more,” Svetnicka emphasized.

According to the Fabick family, all of the preparations paid off. “We couldn't have been happier with the experience and what it meant for our employees and the community,” concluded Doug Fabick. As luck would have it, it also was an unseasonably warm February day in Missouri; the sun was shining and temps were in the mid 70s as the crowd gathered to welcome the Vice President.—CEG