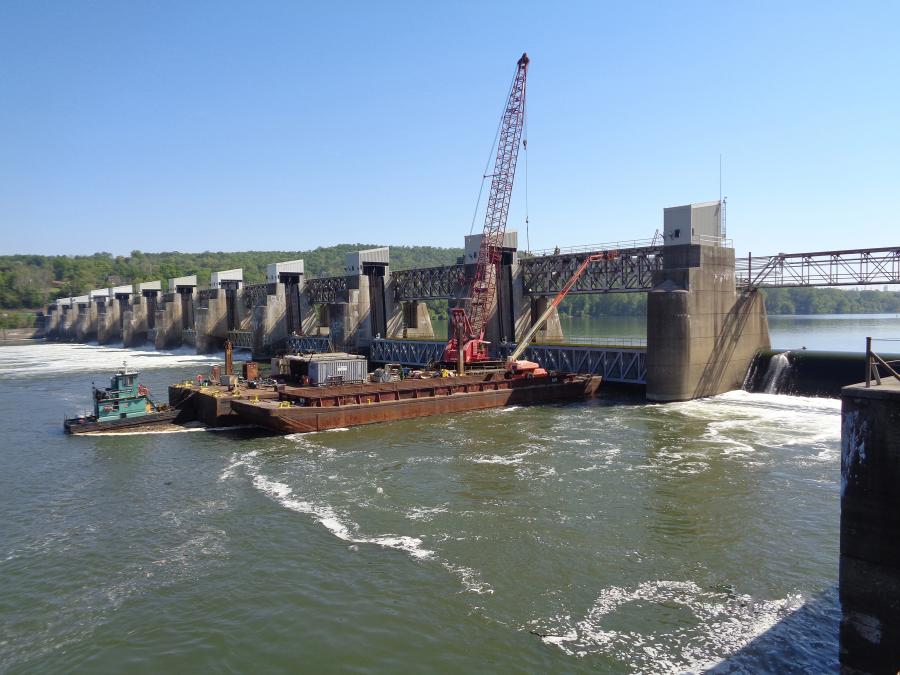 When complete, work at Montgomery will address reliability concerns by replacing the aging and deteriorated 56-ft.-wide by 360-ft.-long auxiliary chamber with a new 110-ft. wide by 600-ft.-long primary chamber.

Fay, S&B USA Construction is currently working on a contract for the U.S. Army Corps of Engineers Pittsburgh District to install two new dam lift gates and a new control system at Montgomery Locks and Dam on the Ohio River in Monaca, Pa.

This contract is the final portion of a larger project to complete upgrades to all 10 gate systems at the dam, dating back to 2008. This current portion began in August 2020 and is expected to be finished by March 2023.

As the work is being completed, funding has been received for a new lock chamber as well. 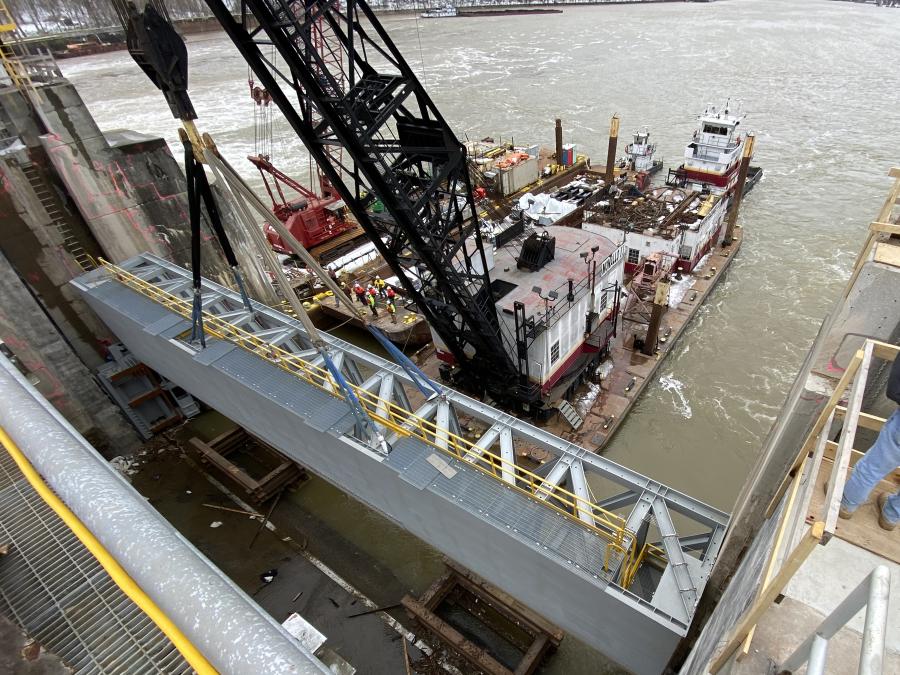 When complete, work at Montgomery will address reliability concerns by replacing the aging and deteriorated 56-ft.-wide by 360-ft.-long auxiliary chamber with a new 110-ft. wide by 600-ft.-long primary chamber.

The Upper Ohio Navigation project includes substantial recapitalization at the Emsworth, Dashields and Montgomery locks and dams, the oldest and smallest navigation facilities on the Ohio River.

In addition to the construction funding for Montgomery Locks, the district will receive more than $10.3 million at 11 district multipurpose reservoirs. Improvements will range from upgrades to sewage treatment facilities, visitors' centers, and nature trails at the district's recreation facilities, as well as other green initiatives in support of environmental stewardship.

"This contract is necessary for the continued reliable performance of the dam gates," said David Heidish, project manager, Pittsburgh District. "The loss of any of the gates could have resulted in the loss of the pool and could have possibly stopped commercial traffic, which would have negative effects on the region and the nation's economy."

Work will also include pier 9, 10 and 11 machinery housing modifications, track and sill modifications and miscellaneous pier concrete repair. The contract also includes the installation of new gate-control and camera systems.

John Anderson, a district operations specialist for the Ohio River, said the installation of the new gate-control and camera systems are an intricate part of the upgrade.

"The existing gate control system is obsolete and a maintenance nightmare," said Anderson. "The new system is going to be more reliable and easier to maintain."

The existing controls were installed in the 1980s and would eliminate the need for manual operation of the lift gates. The new camera system will increase the safety of both lock operators and river users.

"The new camera system will give dam operators better visibility of the gates and the surrounding areas," said Anderson. "Being able to see what's happening around the dam prior to operating the lift gates is an important aspect of operating the dam safely."

According to Katie Spear, vice president of marketing of Shikun & Binui USA Construction, the Montgomery Locks and Dam has been in operation since 1936, with both a commercial lock and a recreational one. It also has a gated dam including 10 gates to control the water level upriver. Multiple gates can be opened and closed to allow water to pass through as needed.

Other upgrades include installation of camera systems, repairing the gate track on lift gate 3, removing machinery housing on piers 9, 10 and 11 so that they can be completely rebuilt and reinstalled, modifying the track and sill, repairing parts of the pier concrete, and painting the existing bulkheads.

"In addition to having new gates, a new control system will be installed so that the Army Corps of Engineers can operate each lift gate remotely whereas the old system was manually operated from the machinery houses," Spear said.

She reported that all lifting activities will be performed using a 4000 Manitowoc crane mounted on a 50 ft. by 150 ft. barge and moved using a 650 hp push boat. Additionally, an A-Frame crane will be utilized to remove the 120-ton existing gates and install the 130-ton new gates.

Among the many challenges on this project includes working around the changing river conditions.

"Fay has dealt with this challenge many times over the last 20-plus years of working on the river," said Chris Pietrzyk, senior project manager. "When river elevations exceed a certain level, we have to move our fleet to safe harbor until the river conditions allow reentry into the work area. This could mean losing several days or weeks of work during the construction phase of the project. In order to overcome this issue, it is necessary to constantly monitor the forecasted river elevations to preplan the movement and location of the fleet. To make up for any lost time during high water conditions, working additional hours during good water conditions becomes necessary to keep the project moving forward and on schedule."

The Montgomery Dam was built in 1934. Its gates were originally designed to meet the 1934 design standard. 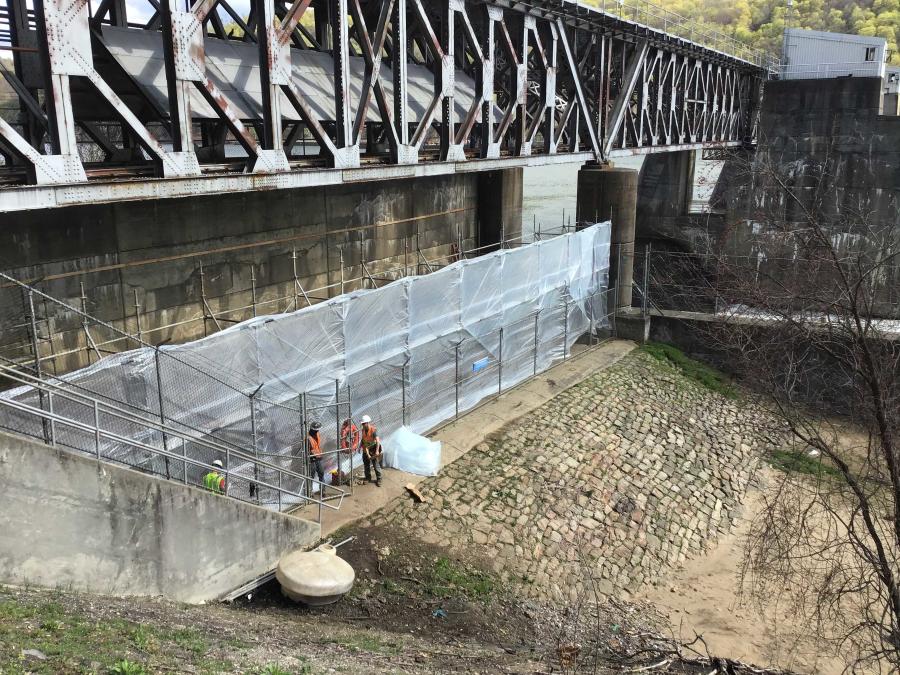 According to the USACE, a 2006 condition inspection of the dam revealed that there were significant deterioration problems with the fracture critical structural members and riveted connections of the vertical lift gates.

In October 2006, a downward bound tow barge struck the upstream guide wall. Three barges separated from the tow and were drawn into gates 4 and 8 of the Montgomery Dam.

Both gates were destroyed by the impacts. In 2008, gates 4 and 8 were replaced with new, modern designed-lift gates.

Fay has been a contractor since 1947 and is now part of S&B USA Construction, which focuses on projects critical to U.S. infrastructure.

Fay previously has worked on many other projects for the Army Corps of Engineers, having replaced seven vertical lift gates, modified an existing vertical lift gate and installed new operating machinery and instrument controls for the gate's operating system on a $57.1M rehabilitation of the Emsworth Locks and Dam.