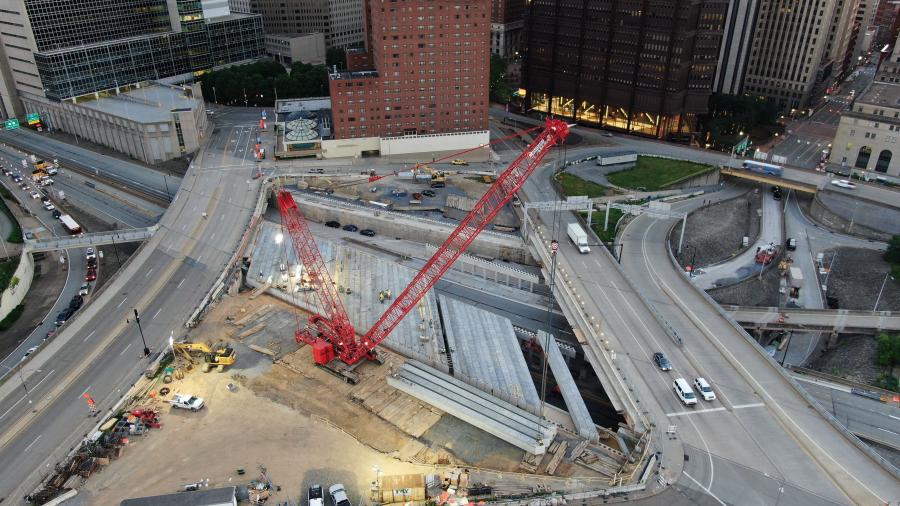 The Pennsylvania Department of Transportation (PennDOT) managed the construction of the “Cap” Project — the I-579 Urban Connector — for the Sports & Exhibition Authority (SEA). (Photos courtesy of Fay, S&B USA Construction.)

A unique bridge/city park project worth more than $30 million has reached completion in downtown Pittsburgh, Pa.

The Pennsylvania Department of Transportation (PennDOT) managed the construction of the "Cap" Project — the I-579 Urban Connector — for the Sports & Exhibition Authority (SEA).

The construction contract was held by the city of Pittsburgh, and the SEA coordinated with the city on the administration.

The I-579 Cap project resulted in a bridge over the interstate roadway and interchange ramps. It houses Frankie Pace Park on top and is part of Pittsburgh Parks and Recreation. 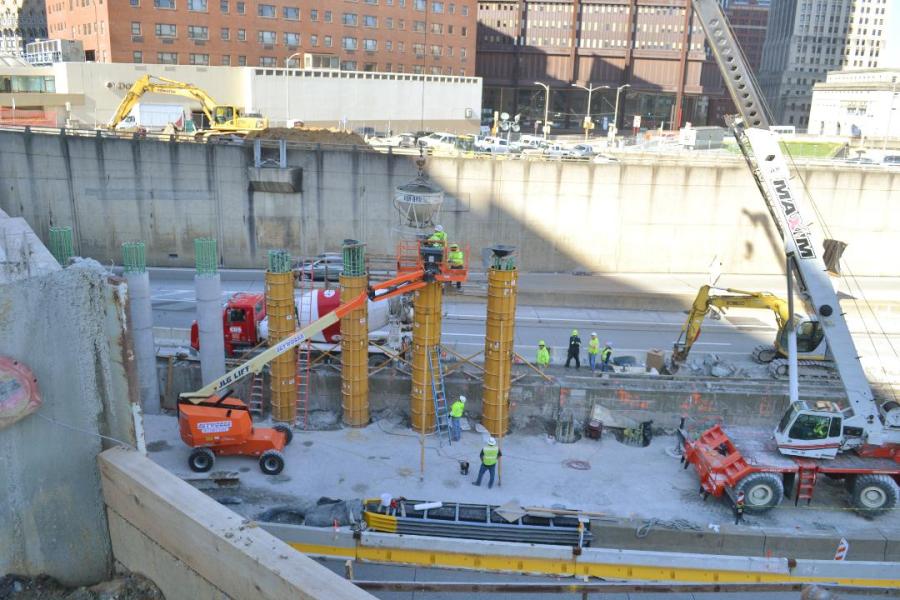 The bridge, constructed by primary contractor Fay, S&B USA Construction, connected two communities once separated by the construction of the original highway. Each of the four sides of the park has safe and convenient street access.

"This project provided upgrades to the drainage system, the interstate, and the city streets," said Chuck Grabner, PE of Fay. "These improvement efforts have had a substantial benefit to the local Pittsburgh community. A few other cities have built freeway caps in an overall trend to increase sustainability and connectivity for residents."

The Cap project received state, local and private funding in addition to a land match. The project cost $32 million overall, $19 million of that being a federal grant from the Transportation Investment Generating Economic Recovery (TIGER) program. This money was awarded for the Cap project's part in reviving the Hill District's economy.

Additional funding came from a long list of sources, indicative of a large amount of support behind this project. Notice to proceed was given on June 24, 2019.

A Fay spokesperson reported on the history of the area and the project. The Hill District was a vibrant cultural center for Black residents with easy pedestrian access to downtown, until the urban renewal of the 1960s. This movement ultimately led to the construction of I-579, which divided the two areas.

The Cap project aimed to reconnect the Hill District and Pittsburgh's downtown by repairing the concrete divide that led to social and economic dislocation.

Crosstown Boulevard, later I-579, separated the two neighborhoods with retaining walls and loud traffic. Even after the Civic Arena was demolished in 2011, parking lots kept the two neighborhoods apart. These parking lots will be part of later development in connection with the Cap project, which works to heal past social injustice while incorporating local culture, art and sustainability.

The I-579 Cap project added Frankie Pace Park, which incorporates local art and sustainability throughout the Hill District. As part of the design phase, the city held community sessions and design reviews to gauge input from Hill District residents and stakeholders. Residents chose the following six themes for Frankie Pace Park: water, green, destination, music, seating and last but not least, connection.

After the city divided the Hill District and downtown, the community lost a significant amount of its peak population. The remaining population experiences notably high unemployment rates compared with the regional average. More than half of the residents use public transportation or walk to work. The Cap project provides a direct walking path to downtown, providing Hill District residents with more job opportunities and a reliable commute. These results demonstrate the project's larger objectives: convenience to residents and greater community access to jobs. 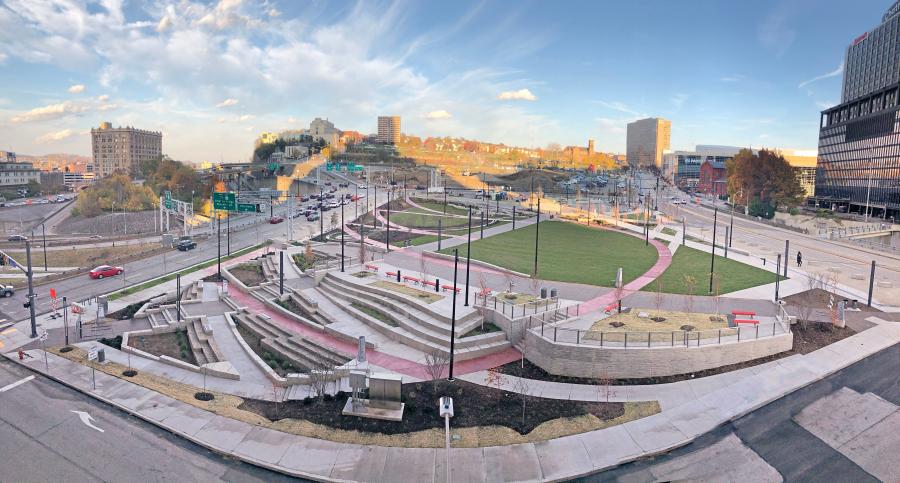 "I have managed many bridge projects, but this one will always be special to me," Grabner said. "With a park on top that has many ESG features, including unique stormwater management and cultural aspects from the neighboring community, it is not only a physical bridge over a highway, but a metaphoric bridge to allow a community to reflect on its culture and have better access to downtown businesses."

He added that sustainability is a key focus throughout Frankie Pace Park's three acres. The park lawns catch stormwater running from I-579 and can absorb up to 6 in. of rainwater. Trench drains work alongside runoff management to collect stormwater and direct it toward the six rain gardens in the northwestern area of the park. Rain is evaporated or absorbed by plants and soil in the rain gardens and park lawns, reducing the stormwater runoff to the sewer system.

Shade from the trees planted will diminish heat from the pavement and reduce the energy needed to cool down nearby buildings. In addition to the trees, project workers planted 4,000 new plants throughout the park.

Grabner said that the Fay team approached this project with the highest safety commitment to workers and the general public.

"Project safety was highly critical, with the work site amid an urban environment," he said. "Specifically, workers constructed the 225-foot by 225-foot bridge over an existing PennDOT interstate bordering adjacent city roads, including multiple interfacing ramps in the work zone.

The Cap project improved pedestrian and cyclist safety by providing upgrades to the surrounding area. The team removed the Webster Avenue Bridge sidewalk and upgraded the pedestrian crosswalks at Bigelow Boulevard and Chatham Street due to their poor condition. The paths added to the park are entirely ADA accessible, and path lighting helps provide safety to park pedestrians and cyclists.

"The Fay team maintained its focus on safety when removing the adjacent bridge," Grabner said. "It used an engineered overhang box suspended by a Volvo ECR235E hydraulic excavator to remove the existing overhang structure adjacent to live interstate lanes below. This approach successfully controlled debris without using standard overhang jacks on fascia girders, which were to remain in place."

Fay utilized a Komatsu PC350 excavator to install temporary shoring for the abutment footers. Amelie, a subcontractor, used a Comacchio MC22 rig to drill the micropiles for the bridge foundation. Another subcontractor, McCrossin, drilled the caissons for the pier using an AF180 drilling rig.

The project team formed pier columns using a JLG 460SJ lift to allow workers to access the top and hoist a Garbo bucket to place the concrete.

According to Doug Thompson, principal assistant construction engineer of PennDOT District 11, the piers were constructed right in the center of the highway with active travel lanes on either side.

"So, about eight feet away, traffic is traveling at 60 to 70 miles per hour since it's a high-speed roadway," he said during construction.

"One of the biggest challenges of urban projects like the I-579 Cap Urban Connector project is the limited amount of work area available for both staging and utilizing equipment," said Tyson Hicks, operations director. "With limited workspace, it is essential to select equipment that is capable of performing multiple activities so that it reduces the amount of times equipment has to be moved in and out of the same work area. It is also important to establish the optimal location for each piece of equipment and then communicate the plan with all crews and subcontractors on a consistent basis to have the most efficient usage."