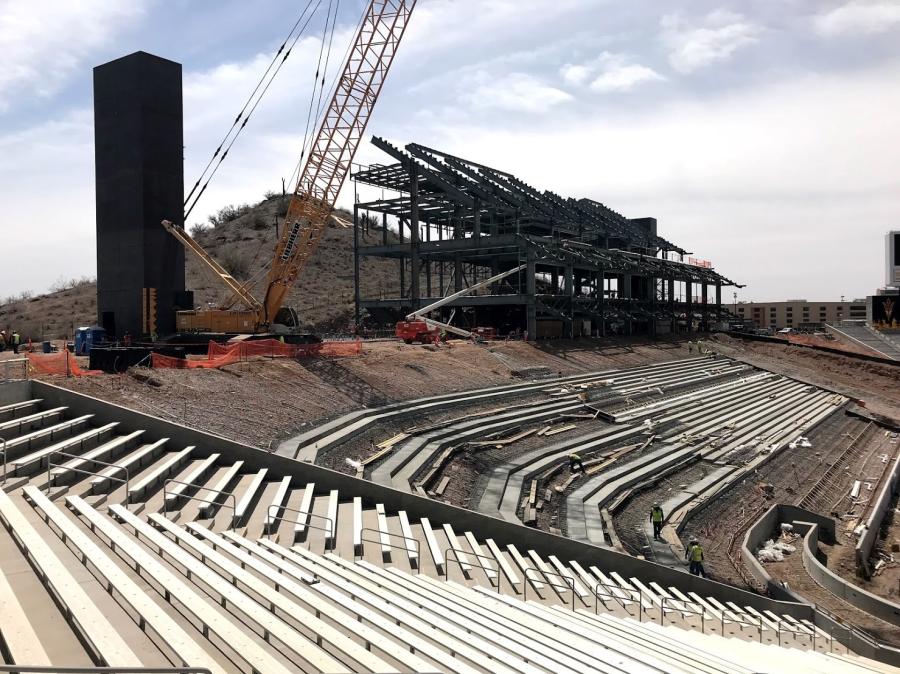 The $307 million Sun Devil Stadium project began with a preliminary phase in 2014 followed by south side work in 2015 and a focus on the west side in 2016. (Sundt Construction photo.)

The third and final phase of reconstruction is under way at Sun Devil Stadium in Tempe, Ariz.

The $307 million project began with a preliminary phase in 2014 followed by south side work in 2015 and a focus on the west side in 2016. In 2016, problems with blockage in a utility trench slowed progress and necessitated delaying work on the east side until the third phase.

The stadium reconstruction was initially scheduled to conclude before the 2017 season. The project is now scheduled to finish prior to the 2018 season.

Much of the work is going into modernizing the stadium. That includes seats with more legroom, additional restrooms, Wi-Fi availability, cellular coverage and a large video board.

East-side work was postponed for a year to expand on original plans, so 2017 was spent on completing the new football facility at the north end, interior work on west side suites and clubs and installing a massive video board.

Crews are now rebuilding the east side followed by more interior finishing in 2019 to wrap up the project.

Isaac Manning, president and CEO of Trinity Works in Ft. Worth, and manager of the stadium project for ASU, said recently that postponing the east side work improves the project long term and meets the university's goal to have a facility capable of year-round use.

The revised plans for the east-side include air-conditioned club space on the 300 and 400 levels and office space on a newly added 450 level. Crews will construct the three improved levels between now and a Sept. 1 kickoff of the 2018 football season.

The university also announced it had hired Hunt Construction — which has regional offices in Phoenix, Indianapolis and Dallas — and Tempe-based Sundt Construction Inc. to develop the stadium under a collaborative contract with the architects to complete the project faster and save money.

The new Sun Devil Stadium's projected cost is $225 million, although that could change depending on fundraising, which began with a $50 million drive in January.

"The east side has already begun and is progressing very quickly," said Mitchell Terrell, corporate communications specialist. "The upper levels have already begun on one half of the east side. Everything will be completed prior to the 2018 season. Only the air conditioning and furniture in the club suites on the east side will not be complete — similar to how the west side progressed."

Athletics continues to raise funds for the final $40 million needed to cover a $300-plus-million budget. To make the investment feasible, the plan is to offer a facility capable of year-round use.

The stadium will likely add hockey and soccer to it uses.

Crews spent summer of 2017 completing a new student-athlete training facility and a 100- by 50-ft. video board on the north end of the stadium. They also did interior work on west side suites and clubs.

The current third and final phase of work includes an east-side rebuild followed by more interior finishing to conclude the project.

Changes in plans necessitated a delay of east-side construction.

But the changes — including more air-conditioned club seating — will add to the comfort level of the renovated stadium, especially on warm fall days.

Also, club seats and suites are in demand.

Club seating areas include the Founder's Club, selling for $10-million for a suite and the Coach's Club costing $500,000 for a suite.

Major donors are responsible for paying for much of the $268-million renovation of Sun Devil Stadium and upgraded amenities for all ASU fans.

The stadium also will feature a Legends' Club. Users of the Legends' Club pay a capital campaign gift of $12,500 per seat.

The amount is payable over a one- to ﬁve-year period. They also pay an annual per-seat contribution of $3,500 and includes a ticket.

Improved stadium features include: exceptional sightlines and viewing angles extending from goal line to 25-yard line on southwest side of the stadium; a climate-controlled lounge; full-service complimentary buffet; premium liquor available for purchase; access to club areas via walkways or elevator; wide and comfortable chair-back seats outside with beverage holders; flat-panel high-deﬁnition screens throughout interior; private entry and private restrooms.

Bonus incentives are in place for the contractor to be on time for a mid-August 2018 delivery.

Crews will be able to build a 450 level on the east side.

Fans on the upper east side will have a clear view of the scoreboard. On the upper west side an overhang blocks some video board view.

The east side will have three primary seating sections in the center with folding seats like on the west side.

Crews will build restrooms and concession areas on the 400 (upper concourse) level.

Some east-side seats will be wider than the 18-in. width on the west side.

The lower bowl on the west side also was completely rebuilt.

As Phase III proceeds, some other plans are being considered. Proposals such as a running track around the lower concourse and a pathway through to Tempe Town Lake still are in the planning stage. Arizona State design school and the business school will work on stadium use ideas.

Seating capacity will be approximately 55,000, down from 71,706 from an expansion in 1977. The stadium opened in 1958 and in addition to ASU football has hosted the Fiesta and Cactus bowls, a Super Bowl, major concerts, a Papal appearance and a commencement speech by then President Barack Obama.

ASU plans to sell naming rights for the refurbished stadium.