First Solar Panels on Highway Sound Walls in U.S. to Be Built in Massachusetts 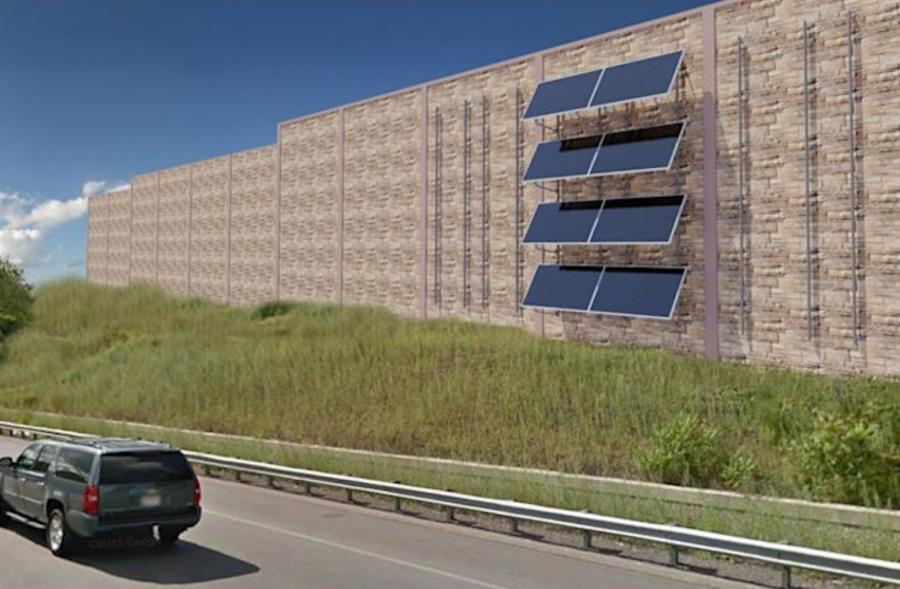 MassDOT has signed a letter of intent to build a solar photovoltaic noise barrier, or PVNB, along Interstate 95/MA Route 128 in Lexington. The project involves retrofitting an existing noise barrier on the highway with solar panels. (MassDOT/Ko-Solar photo)

Massachusetts is on the verge of becoming the first region in the United States to install solar panels on a highway noise barrier, according to a Jan. 25 statement from the Department of Transportation (MassDOT).

The agency has signed a letter of intent to build a solar photovoltaic noise barrier, or PVNB, along Interstate 95/MA Route 128 in Lexington. The project involves retrofitting an existing noise barrier on the highway with solar panels.

A trio of Massachusetts companies — Hopkinton's Solect Energy, Ko-Solar in Natick, and Boston-based PowerOptions — have partnered with MassDOT on the initiative.

Solect Energy will finance, install, monitor and maintain the project, according to the statement.

The Boston Globe reported MassDOT plans to monitor the venture for information about noise impacts, maintenance, cost and community perception to see if it can be expanded to other parts of the state.

Ko-Solar has long wanted to put solar panels in places no one really notices, like on industrial building roofs, in parking lots, and, particularly, on highway sound walls.

The planned 3,000-ft.-long, 20-ft.-tall noise barrier selected is on the north side of I-95/MA 128 and is constructed of reinforced concrete. According to MassDOT, the retrofit photovoltaic system capacity is expected to be 637.5 kW DC, and 802,000 kWh will be generated annually — the equivalent of supplying 120 homes per year with electricity.

Metal grids will be attached to the sides of 160 concrete sound barriers on the southbound side of I-95, and the solar panels will be mounted at an angle toward the roadway.

Solect Energy will own the installation, while MassDOT will buy the power the solar panels generate at a few cents per kilowatt-hour cheaper than the basic utility rate.

The pilot project is a part of the Solar Massachusetts Renewable Target (SMART) program, which offers incentives for residential and commercial solar projects throughout the state.

"The installation qualifies for an extra six cents per kilowatt-hour under a provision that gives a boost to projects constructed over an area also used for transportation purposes," Energy News noted. "In September, the plan also received a $345,000 grant from the state Department of Energy Resources as part of a program that helps state agencies and colleges pursue clean energy projects.

Other countries, such as Germany and Australia, already attach solar panels to highway sound barriers.