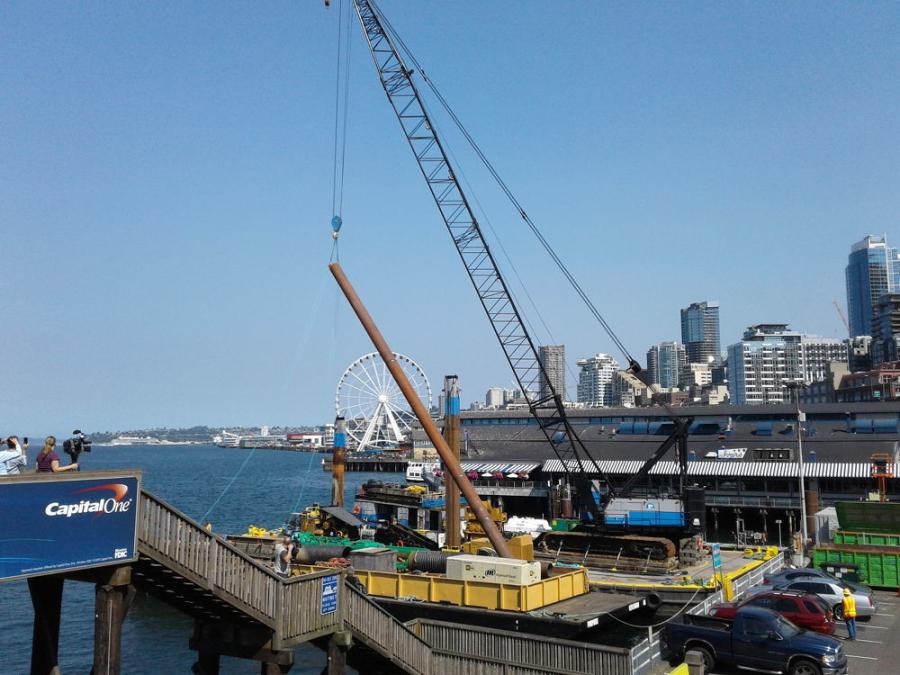 The first order of work on the Colman Dock Project was to build a temporary home for the King County Water Taxi and Kitsap Transit Fast Ferry. This allowed crews to demolish and rebuild the passenger-only ferry terminal on the south side of the dock, near Yesler Way. (WSDOT photo)

The largest floating crane in western North America is now on site in Seattle, ready for its role in the rebuild of the Colman Dock facility, Washington State Ferries' largest ferry terminal.

The Pacific Lifter is an American Hoist and Derrick 509 revolver. It sits on a 400 ft. by 106 ft. by 28.5 ft. pedestal, with a capacity of 1,042 tons. It was brought this summer by tug and barge, starting out from the Gulf of Mexico, through Ensenada, Los Angeles and finally to Seattle, said Kustaa Mansfield, part of the marketing and business development team of Pacific Pile Marine.

“It was constructed in 1969,” Mansfield said. “At the time it was constructed, it was the largest crane in North America. A lot of equipment in this industry has maintained its ability to do good work because the physics are the same. It's essentially a floating crane. It's not a fixed position, but sits on a pedestal and the revolver structure is connected to the pedestal. It allows you to have full rotational capability while you're on the boat. You can pick a load, turn the crane body and the load moves with you. There isn't anyone who has an equal machine in this area.” 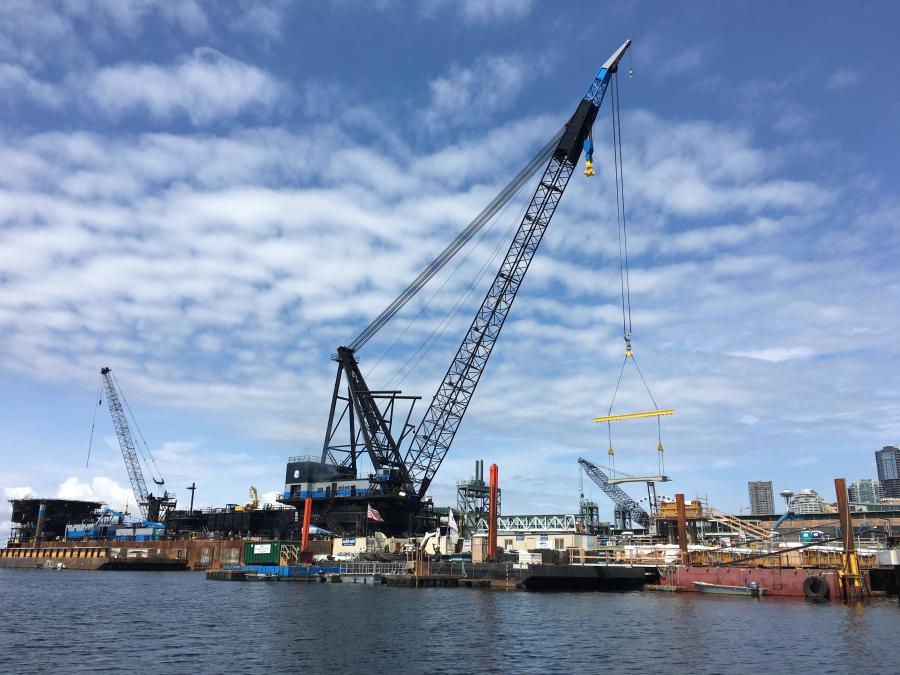 The crane sits on a barge that is about 30 ft. high, with the total height of the barge and crane combined about 350 ft. off the water.

While at the Pacific Pile Marine facility on the Duwamish waterway, passers-by often phoned the company to ask about the piece of heavy equipment.

“It's difficult to really appreciate the magnitude unless you are up close,” Mansfield said. “People can see the boom from I-5. As you get closer and closer, it just seems to get bigger and bigger. We had to delay the load certification a few times, because we didn't have enough weight. It literally picked up another barge with stuff on it in order to achieve a sufficient enough weight so the inspectors felt confident we were really putting it through its paces. The crane picked it up, put it down, did a rotation on the water. It really is one of those things the scale is relative. Because it is intended to do those things and because it does it so easily. When you get up close you realize is something special.”

The barges are on site not only for the Pacific Lifter and other heavy equipment, but as part of the plan to keep the WSF terminal and dock fully operational during the five years of scheduled construction.

“We made a decision early on to do the construction while we are completely operational,” said Broch Bender, spokesperson of the Washington State Department of Transportation.

“We run a full sailing schedule with no cuts to service during construction. One of the ways we can do that is by physically removing the construction staging zone to the barges. One of the uses up until now on another barge is to set and drive steel piles into place that form the base. We also use these barges and cranes to drive the steel piles necessary to support the new trestles. This particular crane will be used exclusively to lift and place huge concrete panels. To build out the first section of new terminal building, as well as passenger only facility and the new pedestrian bridge.”

In 2017, more than nine million people, including five million foot passengers, traveled through the Seattle Multimodal Terminal at Colman Dock. WSDOT has embarked on the $350 million project because of dock components that are aging and vulnerable to seismic events, Bender said.

“The layout of today's facility also creates safety concerns and operational inefficiencies due to conflicts between vehicles, bicycles and pedestrian traffic.”

The future advantages of the project are:

The project is scheduled for completion in 2023.