Florida to Receive Another $404M to Prep for Climate Change 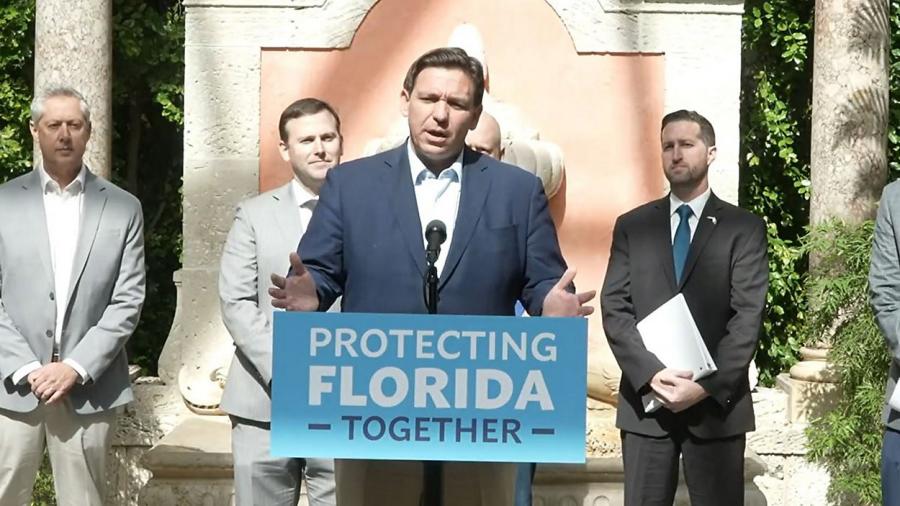 Florida is getting a $404 million dollar boost to its plans to protect itself against the rising sea, although the money is just a fraction of the expenses the state will need in the effort.

It is the largest amount of money for climate change preparation ever seen in Florida — and the $404 million is all from the federal American Rescue Plan, the $1.9 trillion COVID-19 relief act championed by the Biden administration.

Combined with the $270 million, three-year funding announced by Florida in late 2021 for 76 similar projects, the money is the most significant investment in resilience in the state, according to the Miami Herald.

"All these projects will enhance Florida's efforts to mitigate and prepare against flooding," DeSantis said at a news conference in Miami. "We're happy to be delivering instead of just talking."

Miami-Dade County alone accounted for $160 million of the pot, with 35 projects funded, ranging from flood and storm-proofing wastewater treatment plants, to raising the banks of canals, and building a big new seawall at Vizcaya Museum and Gardens.

Miami-Dade also scored $55 million to take homes off leaky septic tanks near the Schenley Park neighborhood in Coral Gables, a boost for the county's new push to quit the failing technology that pollutes Biscayne Bay and is made worse by sea level rise.

Other key projects include a $25 million mobile home wastewater collection project in Pinellas County, the biggest of five that county received, a $40 million stormwater pump station in Jacksonville, and $35 million for Islamorada in the Florida Keys to upgrade its water main.

The Herald noted that a notable exclusion from the list of winners was the South Florida Water Management District (SFWMD), which requested more money than any other municipality in the state at $763 million.

Florida Department of Environmental Protection (DEP) Secretary Shawn Hamilton told the Miami news source that the district was not qualified to ask for any of the funds in the first place because it was not a local government, but it was eligible for the $270 million in grants awarded in December as part of the state's sea level rise plan.

While the SFWMD did not qualify to receive any funding from that pool, the St. Johns River Water Management District (SJRWMD) on the state's Northeast coast did get five projects funded.

In a statement, SFWMD spokesperson Randy Smith confirmed that his South Florida district was ineligible for the funds but added that it is "excited about the momentum for resiliency efforts in Florida."

"It's clear that the state is focused on funding projects that reduce the impacts of flooding and sea level rise to our communities," he noted. "We're committed to continuing to work with the state to identify various state and federal funding streams for resiliency projects led by the [SFWMD]."

DEP's Hamilton also confirmed that there will be an added $20 million in funding announced soon for planning projects that would include vulnerability studies of coastal cities to help them figure out which sections will flood first.

Governor to Ask for an Additional $500M

DeSantis said he plans to ask the Florida Legislature for another $500 million for resilience projects in his budget this year.

So far, all the hundreds of millions in funding for climate change projects address the symptoms of climate change: rising tides causing more flooding, degrading septic and wastewater systems, and over swamped roads.

When asked by a Miami Herald reporter when the state will address the increase in greenhouse gas emissions — the root cause of climate change — DeSantis chose not to answer the question, but instead talked about how the state has long been a target for hurricanes.

"We're not going to be able to stop being vulnerable," he said. "We're going to mitigate what Mother Nature is throwing at us."

The governor also did not use the phrases "sea level rise" or "climate change" in either of his Feb. 1 announcements, the newspaper reported.

Much More Funding Needed for the Fight

The $674 million in state funding announced up until now is far less than what will be needed to pay for a significant adaptation to sea level rise in Florida.

More than 600 projects were submitted to the initial Resilient Florida grant program, totaling more than $2.3 billion in requests for state money to help with more than $3.8 billion in projects.

South Florida alone asked for $1.7 billion of the total $2.3 billion.

Wesley Brooks, the state's new chief resilience officer, told the Herald that Florida is not done funding these much-needed projects.

"We can and must do more to support resilience priorities for our inland and coastal communities," he said.