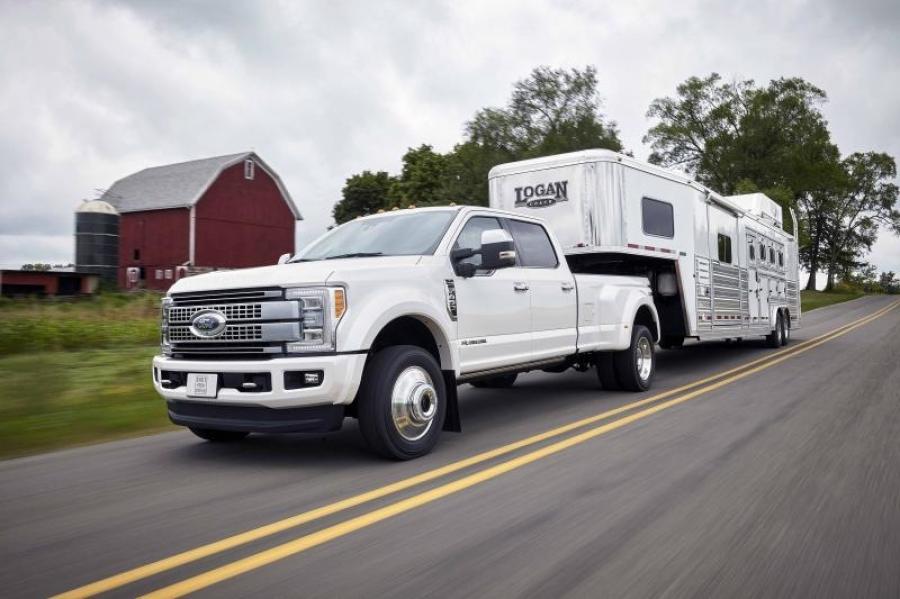 Some of the data Ford is releasing includes:

• Maximum gross combined weight rating for truck and trailer now tops out at 41,800 lbs.; more than half the maximum weight limit of an 18-wheeler tractor-trailer combination for most federal highways.

“This is the best heavy-duty truck we've ever made,” noted Doug Scott, Ford's truck marketing manager, in a statement.

Show Trucks at the Walcott Jamboree

Latest three sticking points to consider: Why (or why not) video?

“What it boils down to is a more efficient truck,” Brian Rathsburg, marketing manager for the 2017 Ford F-Series Super Duty, told Fleet Owner.

“If you can tow and haul more, that means you need to take fewer trips, which benefits you on fuel economy, certainly, but also in time savings,” he explained. “Time is money for commercial customers and if you can be more efficient and also more capable at the same time that lowers the overall cost of ownership for the vehicle.”

• A center high-mounted stop lamp camera to provide visibility into the cargo box that is especially helpful when hooking up gooseneck and fifth-wheel trailers;

• An “ultimate trailer tow” camera system that uses four digital, high-definition cameras to give the driver a 360-degree bird's-eye view surrounding the vehicle.

• A “trailer reverse guidance” package that provides visual cues and tips to help ease backing up a trailer, along with a factory-available trailer camera can be custom-placed on a trailer to improve visibility backing up;

• An optional in-cab trailer tire pressure monitoring system, accessible from cab while stopped or on the highway;

• A blind spot information system with trailer tow that is “optimized” in Scott's words for the Super Duty to include trailer lengths up to 33 ft. long, using radar sensors in the truck's tail lamps to monitor areas that may not be visible to the driver.

“As we like to say, it boils down to safety systems and technology making the customers' lives easier,” Rathsburg said. “And making their lives easier helps them be more efficient – 'efficient,' there's that word again – which again helps lower the overall cost of operations for them.”

First, its second-generation 6.7-liter Power Stroke V8 turbocharged diesel engine now offers 440 hp and 925 lb.-ft. of torque, mated to a TorqShift six-speed SelectShift automatic transmission. This package will be the standard option for every Super Duty – from F-250 to F-450 – that is spec'd with a diesel engine; without requiring special tuning or unique hardware, the OEM said.

The second powertrain choice is a 6.2-liter V8 gasoline engine – the standard option for F-Series Super Duty models – that offers 385 hp and 430 lb.-ft of torque. It, too, will be mated to the TorqShift six-speed SelectShift automatic transmission, the OEM said.

Rathsburg added that commercial customers should also understand how the use ofmilitary-grade aluminum in both the body and frame of the 2017 F-Series Super Duty – mirroring what Ford did when it revamped its F-150 pickup two years ago – benefits commercial customers.

“We saved 350 lbs. of weight by using that strong aluminum and we reinvested some of that weight savings back into the truck to create bigger and stronger components,” he emphasized. “That again allows the truck to be more capable and more efficient for the commercial user.”