The fire occurred in the underpass of one of the busiest stretch of roadway in America, backing up rush hour traffic and creating what was termed a "transportation crisis". 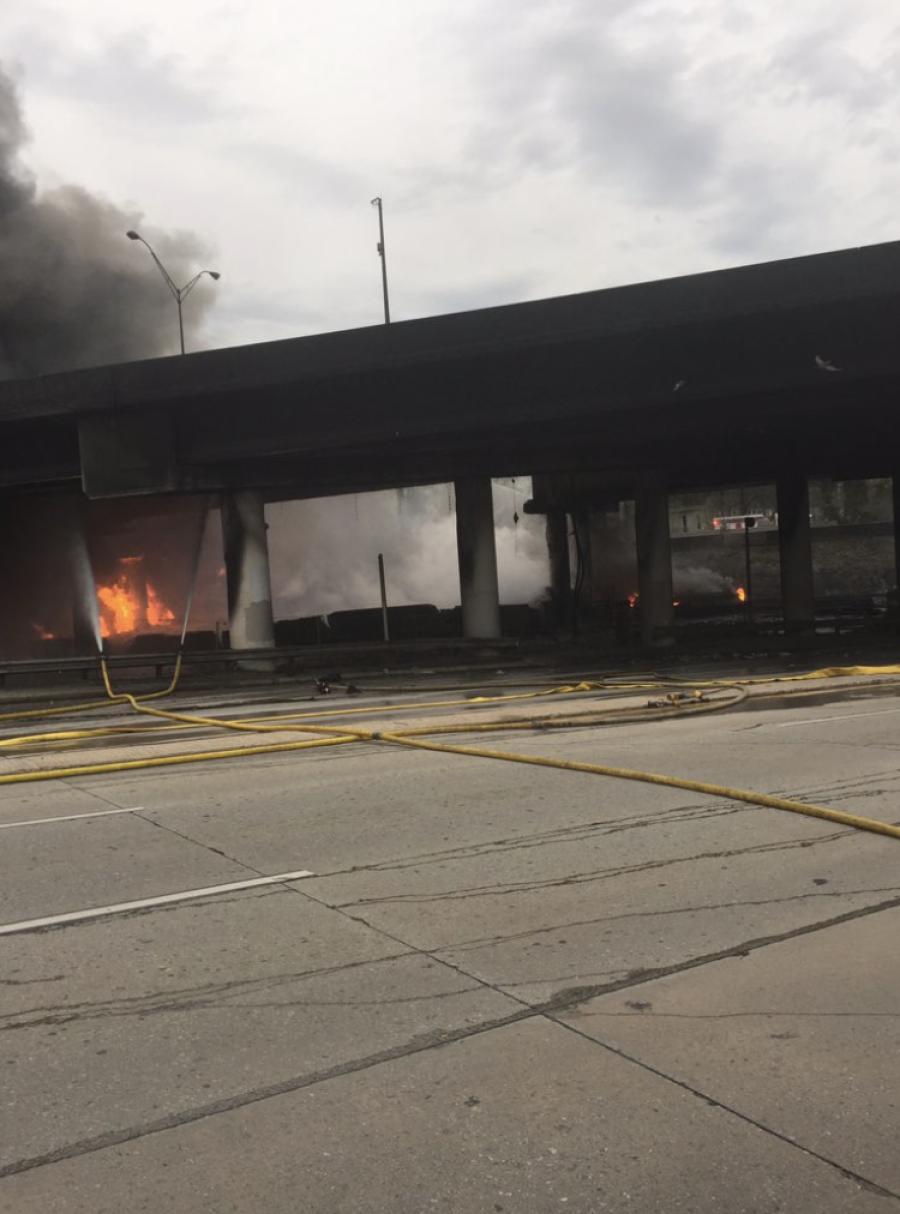 A photo of the fire was posted by Atlanta Fire Rescue on social media with the caption "*Emergency* Interstate 85 in Atlanta GA has just collapsed due to fire under bridge. All lanes blocked. Avoid the area."

A massive fire caused a bridge to collapse March 30 on Interstate 85 in Atlanta, one of the busiest stretches of roadway in America, backing up rush hour traffic for several miles and creating what the mayor called a long-term "transportation crisis."

The huge fire was reported at 6:21 p.m. ET underneath the bridge on the northbound side — near where the interstate merges with another major artery, State Highway 400 — forcing authorities to close the interstate and turn drivers around during the evening rush.

Then, at about 7 p.m., the bridge collapsed in a flaming heap that spewed thick, black smoke high into the air, where it was visible for miles around Atlanta.

Authorities managed to turn back traffic before the bridge collapsed, and Georgia Gov. Nathan Deal said no injuries were reported. But thousands of motorists were locked in place on the interstate as state troopers worked on a way to get vehicles off the roadway.

The fire itself was declared under control about 8 p.m., but the collapsed bridge was the principal problem. All lanes of I-85 in the area are expected to be blocked indefinitely, the state Transportation Department said.

"I think it's as serious a transportation crisis as we could have," Mayor Kasim Reed said at a news conference late Thursday. He said that FBI agents were on the scene "to work out what happened" but that the agency had reported no suspected link to terrorism.

Russell McMurry, commissioner of the Georgia Department of Transportation, also described the situation as a "crisis."

At a news conference at 11 p.m. ET — almost five hours after the fire started — transportation crews still couldn't gain access to the scene because of the heat still being generated by the flames, McMurry said.

A department spokeswoman said it was unlikely that inspections of the affected structures could even begin until Friday afternoon at the earliest.

Atlanta Fire Chief Kelvin Cochran disclosed Thursday night that other parts of I-85 had been "compromised" — including the important interchange over Piedmont Road, which leads to the state Capitol.

In an interview with NBC affiliate WXIA, Cochran credited state troopers with saving lives by managing to stop all of the traffic in the 40 minutes before the bridge collapsed.

"We had heavy fire. We had heavy smoke. We couldn't see through that smoke just like everybody else," he said.

The cause of the fire remained undetermined Thursday night, but Deal said in a televised statement that authorities were focusing on the possibility that polyvinyl chloride (PVC) piping commonly used in construction may have ignited for some reason. WXIA reported that large amounts of PVC pipe were stored under the bridge.