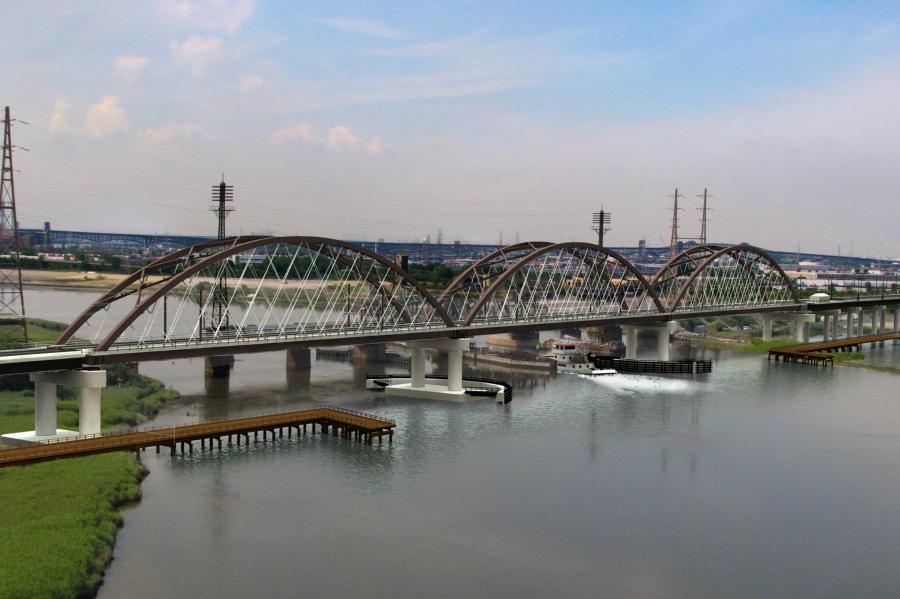 The Federal Transit Administration formally adopted an environmental impact statement for the Portal Bridge project to replace a century-old railroad swing bridge over the Hackensack River in New Jersey, a key step toward funding the work that is part of a broader program to improve rail capacity in the Northeast.

The project would replace the old swing bridge between Kearny and Secaucus that began operation in 1910 and sometimes snarls East Coast passenger train travel when it becomes stuck in the open position for waterway traffic. The planned new structure would be a high-level fixed bridge that rises above river traffic.

The bridge replacement “is currently in the project development phase of the FTA's Capital Investment Grants Program,” the FTA said. “The project's partners — the Port Authority of New York and New Jersey, NJ Transit and Amtrak — are seeking $811 million in CIG funding toward the $1.64 billion total cost.”

The FTA issued what stakeholders said was a long-awaited record of decision to formally adopt a 2008 impact statement from the Federal Railroad Administration, plus three subsequent re-evaluations.

“This ROD is a part of the environmental review process required by law for projects seeking federal funding through the CIG Program,” the FTA said. “Additional steps must be completed according to legal criteria before the FTA can make a determination about CIG funding for the project.”

A Portal Bridge project website said that the existing bridge “hosts about 450 trains per day traveling between Newark, N.J., and Penn Station, N.Y., [and] is a major bottleneck and source of delay of train traffic” as the “aging mechanical components sometimes malfunction while opening and closing for maritime traffic.”

The plan by NJ Transit and Amtrak is to build a two-track replacement structure known as Portal North Bridge, which as a high fixed-span facility eliminates the movable components and risk of malfunction. They also have proposed building a second, two-track Portal South Bridge span as part of the Amtrak Gateway Program, which would double the train capacity along this part of the Northeast Corridor.

Reacting to the FTA decision, Stephen Gardner, Amtrak executive vice president said: “Amtrak applauds this landmark accomplishment. This is a major step towards the renewal and expansion of the Northeast Corridor that Amtrak has long advocated for and continues to prioritize.”