FWTA's $1B TEXRail Project on Time

On any given section, the rail is being laid down or work on the elevated structures is under way. In the elevated portions, drill shafts were dug for the foundations and supports. 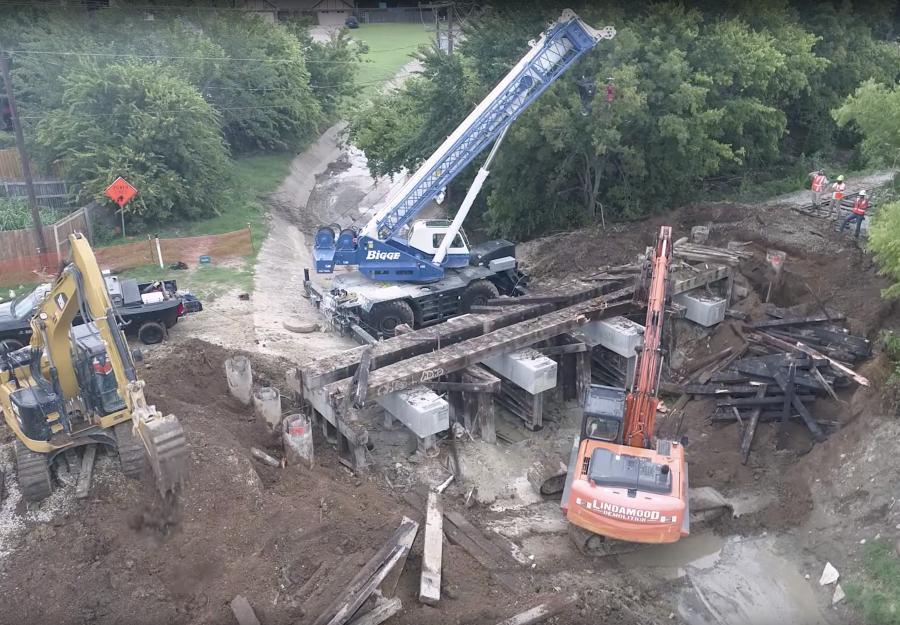 With the construction of the rail line on schedule and the field testing of the first train set for late fall 2017, the Fort Worth Transportation Authority's (FWTA) TEXRail commuter rail project is meeting its target goal of beginning service in late 2018. And if the project forecast's hold true, an estimated 8,000 people per day will be riding the rails instead of driving cars when heading to downtown Fort Worth or to the Dallas/Fort Worth (DFW) International Airport.

“There is a lot of traffic between Dallas and Fort Worth, and as a person who drives to the airport quite a bit, the population is growing every day,” explained Bob Baulsir, FWTA vice president of rail and procurement, as to why the TEXRail project is necessary. The current population is at a little over seven million, making the Dallas-Fort Worth metoplex the fourth largest population center in the United States, and it's only expected to increase.

In 2007, the FWTA proposed TEXRail, a 27-mi. (43.45 km) commuter rail project that would connect Fort Worth, North Richland Hills and Grapevine to DFW Airport's Terminal B. Local funds, totaling $500 million, raised half of the project's funding.

“You don't get that level of support without the large majority of the public that we serve seeing this as a positive change for the community,” Baulsir said.

In December 2016, the Federal Transit Administration of the United States Department of Transportation signed an agreement to provide matching federal funds of $499.39 million. The total cost of TEXRail — the largest project undertaken by FWTA — is $1.034 billion.

The joint venture of Archer Western Herzog was awarded the contract to construct the rail line. Baulsir said both of these firms are “real experts” in taking on this type of transit project. Wabtec received the contract to perform the signaling work along the route.

Although the FWTA already had right-of-ways along the entire stretch of existing rail line to the airport, Baulsir said that there was a great deal of real estate and jurisdiction issues to work through before construction began. In a few places, business were relocated because a larger right-of-way was needed, and the rail line was elevated to avoid structures on the ground.

Baulsir said that at the construction's peak, 1,000 workers are out on the site all along the corridor. “Because we have not compartmentalized the construction to one section to the next; we're going out and working on the whole alignment.”

On any given section, the rail is being laid down or work on the elevated structures is under way. In the elevated portions, drill shafts were dug for the foundations and supports. A great deal of the construction involved working through the utility relocation.

Baulsir said that “in some places where we double track, where we're running next to the original track, we can't necessarily build an active rail line over the linear part of a utility because if there's a problem when we dig it up, there are a lot of consequences.”

Also included in the project is construction of a new bridge to carry the rail line over the Trinity River, which runs through Fort Worth, and building seven of the route's nine stations. The new stations are located on the north side of Fort Worth, in North Richland Hills and in Grapevine, and surface or elevated parking will be added, along with covered seating, ticket kiosks and security features. Two of the Fort Worth stations already exist, and the airport is responsible for constructing the TEXRail station at its terminal.

Baulsir said that in spite of the challenges of resolving the utility conflicts and weather setbacks, they are focused on finishing the job.

“We're moving pretty fast and pretty hard,” he said. “I can't tell you it's not a challenge, because it is. We come in every day and do it, and we're not going to rest until it's done.”

The vehicle powering the rail line is the FLIRT 3 (Fast Light Innovative Regional Train), which is built by Stadler Bussnang AG, a Swiss company, but the vehicles are being assembled in Salt Lake City, Utah, as part of the Buy America program. We are the first to import these state-of-the-art vehicles into the U.S., Baulsir proudly said. “It's quite advanced technology. It will be the premier rail train in Texas for sure.”

The FLIRT 3 is a bidirectional diesel mechanical unit (DMU) with an engine that is Tier IV certified for emissions compliance.

“This is an advanced diesel; it's not the diesel we had in the old locomotives,” he said.

FWTA purchased eight trainsets, and each trainset is comprised of five cars.

“For commuter rail, this DMU provides a completely differently feel,” he explained. “You're not in a locomotive-hauled coach where each unit is individual and there are doors separating each car. It has a really open feel.” Rider amenities include luggage carriers, tables, a quiet car, restrooms, USB ports and ADA accessibility.

Delivery of the first trainset to the Fort Worth region is scheduled for October, and the initial field testing will occur in Grapevine, which has a railyard.

“They're an old railroad town and they've been great partners with us,” Baulsir said. “We're excited to begin our first testing there.”

There are two interior work bays with pits, an exterior work bay with a pit, a wash facility and fueling facility. The building itself is being built using tilt wall construction and completion is expected by the end of October. Imperial Construction, a local company, was awarded that contract.

Of the contractor, Baulsir said, “Imperial Construction is really doing a fine job. They're great folks to work with.”

A welcomed effect of the TEXRail project is development of new businesses and apartments near the route's terminals.

“We're already seeing a lot of transit-oriented development,” Baulsir said. “People want to live on the rail line and not have to drive in the traffic.”

There also is the expectation that with Grapevine only an eight-minute ride away, airport travelers with time between flights will be likely to leave the airport and visit the nearby towns or downtown Fort Worth.

“We're going to have an efficient and safe mode of travel that really is premium to what we've experienced here before,” he added. “I think we're going to raise the bar of what folks expect in this area.”