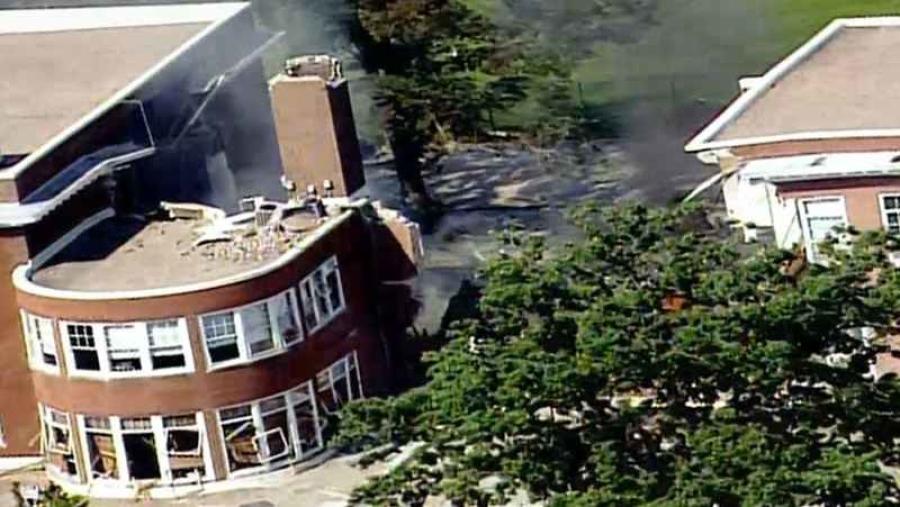 A person believed to be missing was found uninjured at about noon. All of the injured people were adults. One is in critical condition.

Ruth Berg and John Carlson were killed in the explosion, CBS Minnesota reported.

Berg, was the school's receptionist of 17 years and was going to be married this October. "She welcomed everyone with a smile and was always willing to go the extra mile to help our students, families and staff,” officials said, according to CBS Minnesota.

Carlson and his children graduated from Minnehaha Academy. Carlson worked at the school for 13 years, and was known for often giving the students ice cream bars, CBS Minnesota reported.

The building near E. Lake Street in the 3100 block of West River Parkway has collapsed to some degree, and fire crews are on the scene extinguishing the blaze and looking to remove any people who might be trapped, officials added.

As of 11 a.m., paramedic crews were treating people at the scene for injuries. Five people were taken by ambulance to the hospital.

Assistant Fire Chief Brian Tyner said that one of the three people unaccounted for was found outside the building and unharmed. He also said the two who are the subject of a “search and rescue mission” might actually not be inside the building but “could be walking around out here. … It may take a while.”

All flames have been extinguished, Tyner added.

Initially, the Fire Department reported on Twitter that one person was killed but then said that was “not confirmed” about 15 minutes later.

“We are backing off that at this time,” Tyner said from the scene.

Police say that along with the people not yet located, five people were taken away to a hospital, and one person was evaluated at the scene and released.

A statement from school administrators said the explosion involved a natural gas leak affecting only the upper school. The academy's lower school is many blocks downriver and unaffected.

The natural gas supply from CenterPoint Energy was cut off, and the utility has “well-trained, experienced crews on site who are coordinating with local emer-gency officials to secure the area,” said company spokeswoman Becca Virden. “We will conduct an investigation to determine the cause.”

Along with the blast taking out a significant chunk of the building, walls still standing had their window frames popped out.

While fire officials say the flames are out, crew members trained several hoses on the rubble into the afternoon in order to keep any blaze from reigniting.

According to city of Minneapolis records, Eagan-based Master Mechanical Inc. was issued a permit on June 7 for “gas piping and hooking up meter” at the address.

Ryan Larsen, a financial officer with the company, said, “We've got people on the site there. They are figuring it out.”

Workplace inspections of Master Mechanical Inc. have led to two citations for violations in recent years, neither of which had “huge penalties,” according to Jenny O'Brien, a spokeswoman for Minnesota OSHA. The company was initially fined $1,100 in 2010 for a violation related to an employee's protection from falling, on a Bloomington site. In 2014, it was initially fined $600 for two paperwork violations at a Maple Grove site, involving an employee right-to-know and a hazard communication, OSHA records show. Those fines were later reduced, to $770 (2010) and $415 (2014).

Among those on the campus were girls for summer cross-country practice, as well as school basketball and soccer players.

Kylee Kassebaum, a sophomore cross-country runner, was inside at the time. She said she and her teammates had left about 30 seconds earlier for lunch.

“All the windows just kind of burst out, and there was a huge explosion that was so loud it kind of shook your insides,” she said. “As soon as we saw it we got in the car, and someone drove away because we didn't know how safe the situation was.”

School administration official Jacob Swanson said he and others were in a meeting, when “I heard a loud explosion. My ears popped.”

Swanson said that he and the others “just saw the middle of the building gone.”

Once outside, Swanson said all he's doing now is “just praying for the people who still might be in there … That's where my heart is.”

A girls' basketball team was also practicing in the gym when the blast occurred. Their coach described it as sounding like “a large door slamming.” Another witness said he and his daughter were in her counselor's office when the explosion knocked them back. All three made it out.

Dozens of neighbors lined 46th Ave. S as they watched units douse the rubble from across the school's soccer field and behind yellow caution tape.

Anne Dussol, who lives a block away from the school, heard the explosion.

“I was walking and I just heard a giant boom,” she said. “It was not a gunshot or a loaded brick being dropped. It was way louder than that.”

Soon neighbors started coming out of their houses and seeing the aftermath. Dussol said she and a teacher walked to the sidewalk to see.

“There were flames shooting from the parking lot,” she said. “We thought at first it was a car on fire until we realized the building was gone.”

Kids were playing soccer on the athletic field as what she believed was part of a soccer camp, she said. After the explosion, they ran away from the school and onto the street.

Dussol remembered the section of the building being as tall as the surrounding parts of the school. “It filled in the middle,” she said.

Deb Shold said she was in the basement of her house about a block away, which rattled when the explosion went off. Two minutes afterward she grabbed her watch, which read 10:25 a.m.

“I heard a very loud explosion and the lights dimmed but came right back on,” she said.

Shold said she had just run water right before the explosion happened, afterward, her water was rusty. It's unclear if city water lines have been affected.

Founded in 1913, Minnehaha Academy is a Christian school. The school had 825 students enrolled during the 2015-2016 school year.

School starts for all grade levels including the Upper School on Aug. 23. The academy lists several camps as being in session on during the week of July 31 the Upper School including a Girls Robotic Camp, which runs from July 31 to Aug. 4 starting at 8:30 a.m. and ending at noon.

School officials said that any families wishing to pick up children should use Edmund Boulevard to the south of the private school's campus.

Gov. Mark Dayton said in a statement that his office “is in continuous contact with the city of Minneapolis and the Minnesota Department of Public Safety, as emergency personnel respond to this emergency.”

Dayton pledged that the state “will provide any and all resources necessary to aid first responders in their efforts to ensure the safety of all those impacted by this morning's explosion.”