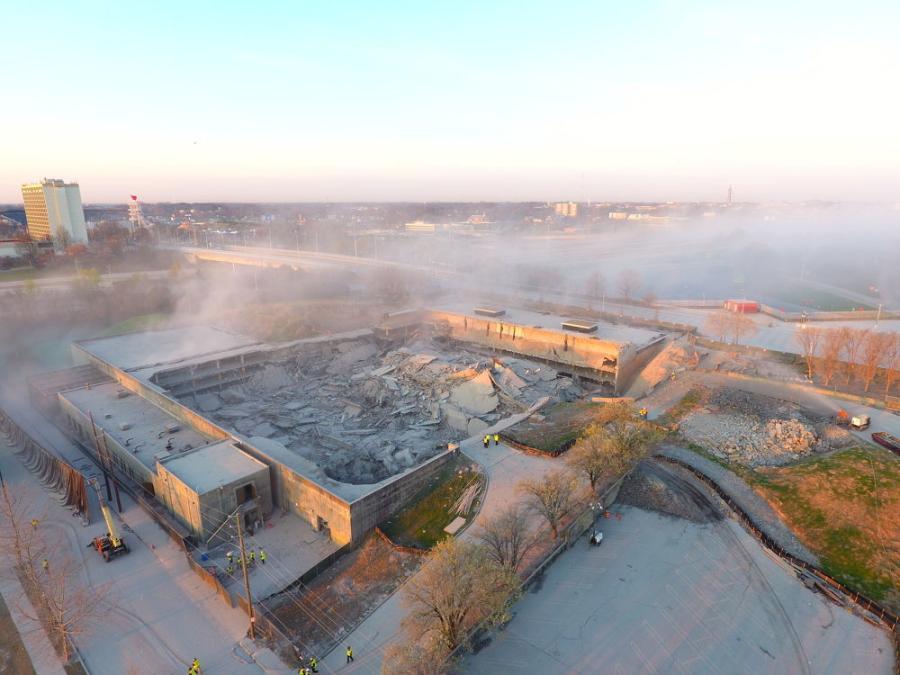 The demolition of the Georgia Archives Building was a complex undertaking that included abatement and temporary tie-backs to support the existing basement foundation walls and culminated with an implosion on March 5.

After demolishing the former Georgia Archives building in downtown Atlanta last March, the Gilbane Building Co. started construction on the new $122 million State Judicial Complex (SJC), a Georgia Building Authority (GBA) project that will house the Georgia Court of Appeals and state Supreme Court, and various other offices for the judicial system.

The groundbreaking ceremony took place on August 31 and the new building — six stories, classically styled, considered to be one of the state's most expensive building project, is expected to be completed in October 2019 and fully occupied in August. The project is being funded by state appropriated general obligation bonds.

New York-based Robert A.M. Stern Architects designed the building, with the help of Stevens & Wilkinson as the local architect. The SJC, when completed, will provide a stunning view of the capitol's gold dome.

Over the past few years, the court of appeals has been expanded from nine to 15 judges and this year the supreme court was expanded from seven to nine judges, which reflects the increase in the number of cases being heard.

“The existing Judicial building was built in 1954,” said Debra Myers, GBA's facilities director. “This building presents day-to-day maintenance challenges due to original building systems. Also, this 100,000 square foot building does not have room for projected growth of the judicial branch in state of Georgia.

“In 2009, funds were appropriated for the initial planning process to conduct a needs assessment of a new judicial building,” she said. “This phase began in September 2010 and concluded in February 2011. The scope of this assessment included resource evaluation and plan develop to provide building and site options and cost estimates leading to the design phase of the project. A thorough assessment of the needs was conducted in which population, caseloads, judgeships, and staffing levels were projected to the year 2040.”

The state of Georgia has energy efficiency and sustainable construction standards for state buildings and a designated rating system — the Georgia Peach Program. The SJC, with its energy efficient MEP system designs will strive for a 3 or better certification.

“The intention of our design goes beyond accommodating the needs of the courts to realize a building that expresses the dignity of the state judiciary,” said Grant F. Marani, AIA, partner of Robert A.M. Stern Architects, “ and in addition provides a great civic space that is second-to-none in Atlanta.”

“Atlanta has a rich history of classical design,” Bill Clark, AIA, LEED AP, principal of Stevens & Wilkinson GA. “Aesthetically, we've taken cues from the state capitol building itself, and the desire of the judges and justices to be respectful of that history and the many wonderful buildings near the capital.

“In order to achieve an iconic yet cost effective solution, the design team utilized pre-cast concrete for the major facades of the building, terrazzo for public area flooring, and introduced Georgia white Cherokee marble and granite for interior and exterior embellishments. They also repurposed marble from the former State Archives Building for portions of the landscape/hardscape.”

The firm had to combine many elements for the final design.

The new courthouse will establish a formal relationship with the state capitol across the intersection of Capitol Avenue and Memorial Drive with a facade that curves to address views from adjacent expressways, according to the Robert A.M. Stern Architects website. The design of this important civic building carries forward the classical architectural approach that has symbolized the dignity of the courts since the early days of the Republic. A gracefully proportioned forecourt leads to the main entrance, surmounted by a colonnaded screen that is the centerpiece of the composition.

The demolition of the Georgia Archives Building was a complex undertaking that included abatement and temporary tie-backs to support the existing basement foundation walls and culminated with an implosion on March 5.

“The most difficult operation was coordinating the involvement of the twelve entities, such as Department of Transportation, MARTA, Georgia State Patrol, and Grady Memorial Hospital, and shutting down three interstates for a period of more than 30 minutes post-implosion.” said Brian Steed, Gilbane vice president/operations manager. “Prior to demolition of the Archives Building, we were able to salvage approximately 2,000 square feet of Georgia marble from the façade that will be repurposed in the new judicial complex. Very little material left the site as most of it was crushed and utilized for fill materials, offsetting the amount of infill materials that would have had to be hauled on site.”

The prep work to get the site ready for construction took several months.

“Final site plans required about 90,000 cubic yards of material of which we were able to use approximately half of which came from on site which drastically reduced the amount to be brought in from off site,” said Steed. “We've had great coordination with GBA for staging and employee parking allowing us to maximize the amount of dollars spent on the new building.”

Gilbane was awarded the contract in July 2016, and in addition to executing the demolition, has been setting up a construction schedule and plan of attack.

Gilbane has erected many large and iconic buildings in Atlanta and other parts of the country.

“The key to this project will be close coordination and communication with all stakeholders. Early on Gilbane worked with the client and design team to align the project's budget [stated cost limitation] with its scope,” said Steed. “The team, as a whole, explored many options, such possibilities for finishes in main areas on the building's façade, to accomplish the design intent without sacrificing quality or scope. The building's security system also is complex requiring different levels of access for the various occupants — from judges to security detail to office clerks. We are working closely with the design team and vendor to ensure the system will work as intended on day one.”

When the project goes into full gear, there will be close to 200 Gilbane and subcontractor employees on site. The subcontractors include: Brent Scarbrough for site work, Berkel for shoring and deep foundations, Carter Concrete for concrete framing, Excel Electrical for electrical, Southern Mechanical for plumbing and HVAC, Gate Precast for precast/stone veneer panels and PASCO for fire protection.