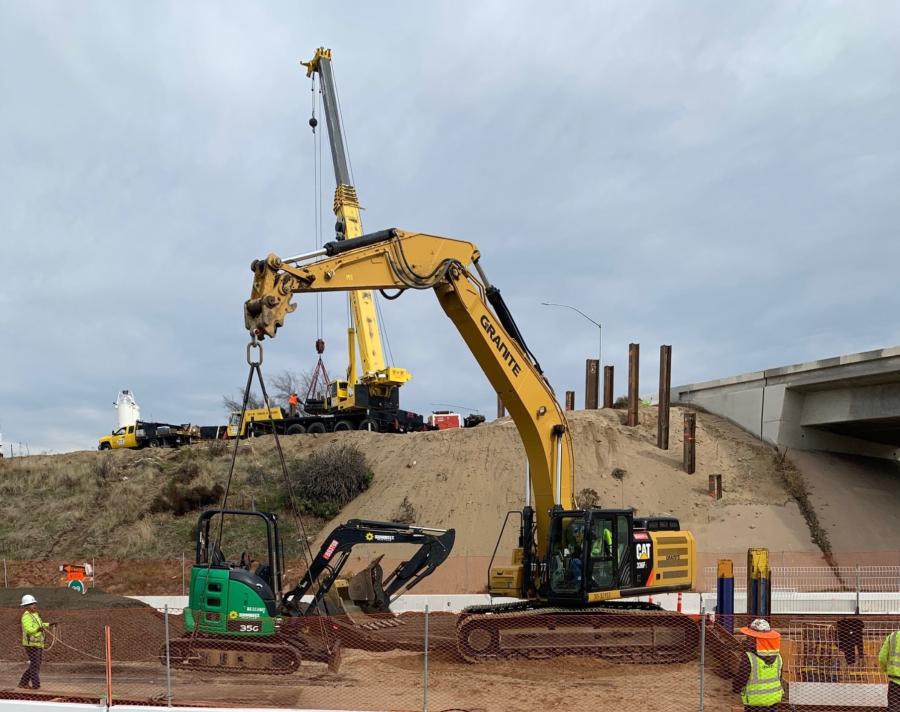 The $41 million project was part of the multi-phased Centennial Corridor Interchange, an important section of routes through Central California.

It's not often that creativity and construction get to show up in the same sentence, yet contractors, utilities and the city of Bakersfield, Calif., teamed up to use creativity and sweat to handle more than 80 modifications to the original plans and successfully complete the Belle Terrace Operational Improvements Project with no citations or claims. 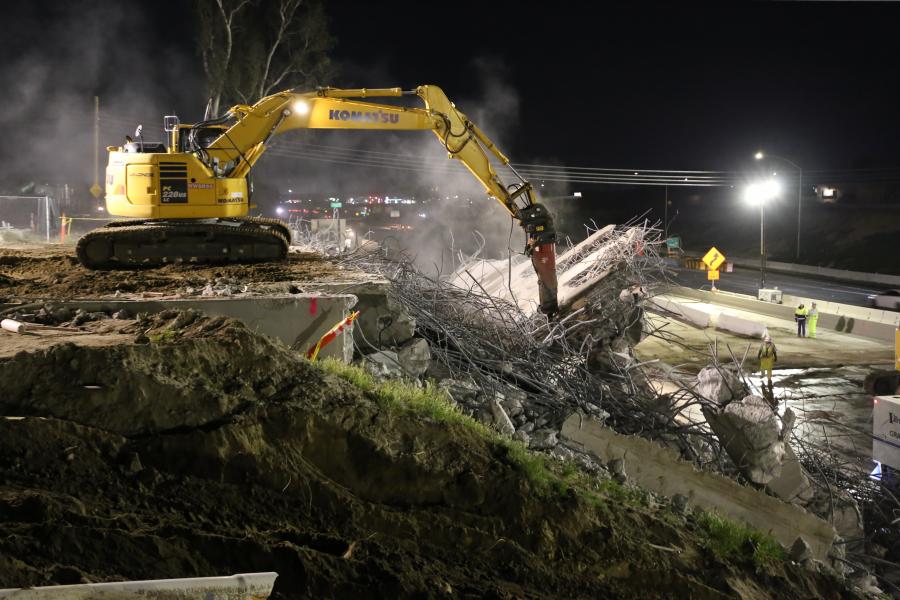 The $41 million project was part of the multi-phased Centennial Corridor Interchange, an important section of routes through central California. The improvements on SR 58 and SR 99 included the replacement of two bridges. The work will allow increased traffic volumes and reduce congestion.

"Our working relationship remained strong even when ancillary factors had the potential to inundate our ability to deliver a quality project safely and efficiently," said Bobby Pentorali, civil engineering manager of NV5, construction manager of the city of Bakersfield. "Our honest working relationships allowed us to manage what seemed at times like an overwhelming endeavor. Granite's team consistently demonstrated an honest and positive culture from the beginning to close-out. The project was a huge success, and we are all proud of what we delivered for our client and the community."

During the course of the project workers removed the reinforced concrete and steel of the original Belle Terrace Bridge in just two nights. The equipment used impacts equivalent to 70,000 1-lb. hammers for the demolition. The demolition and removal of the existing bridge was carried out over SR 99. The freeway had to be closed and active traffic detoured for five-hour windows on two consecutive nights. One of the many "surprises" of the project occurred when workers found asbestos conduits in the existing bridge, originally constructed in 1963. The construction team had to surgically remove concrete segments and conduits containing asbestos by cutting through the deck.

The construction team leaned heavily upon Caterpillar equipment during the demolition and excavation phases of the project. The team deployed the Cat 320, 336 and 349 excavators, CatD6N with Trimble earthworks and a Cat 140M3 motor grader. The team also used a Link-Belt RTC8080 crane as well as other equipment during the bridge and retaining wall construction sequences.

SR 99 was built on an ancient riverbed and routed in a lowered trench through central Bakersfield. The project called for the freeway to be widened approximately 100 ft. and a retaining wall constructed. The soil nail wall, the retaining wall structure, was 3,400 linear ft. in length, and was more than 30 ft. tall. It utilized six, 5-ft. tall vertical lifts of sequenced construction to build from the top down.

The soil nail and retaining walls hold dirt, rock and soil in place, preventing them from collapsing onto the freeway. The construction method for the soil nail wall consisted of drilling holes angled downward from horizontal, into a 5-ft. vertically excavated soil face into the soil, then inserting steel rods and grout, tensioning with a large nut and washer into the holes. This essentially formed a "nail" to support the wall.

This cost-effective method quickly fell apart like the sandy soil that need to be secured. The loose, sandy soil would not stand vertically long enough for a five- foot layer to be completed. Granite Construction conferred with the owner's engineer and construction team to determine a fix. The solution began with the workers excavating a 2-ft.-wide trench, more than 30 ft. deep, then placing slurry that when cured would hold back the earthen materials vertically as lifts were constructed. Some 6,000 nails were inserted into the supported soil as the wall was constructed. Each nail was drilled 20-to-30 ft. deep. The nails, when tensioned, restrain the vertical pressure of the soil. 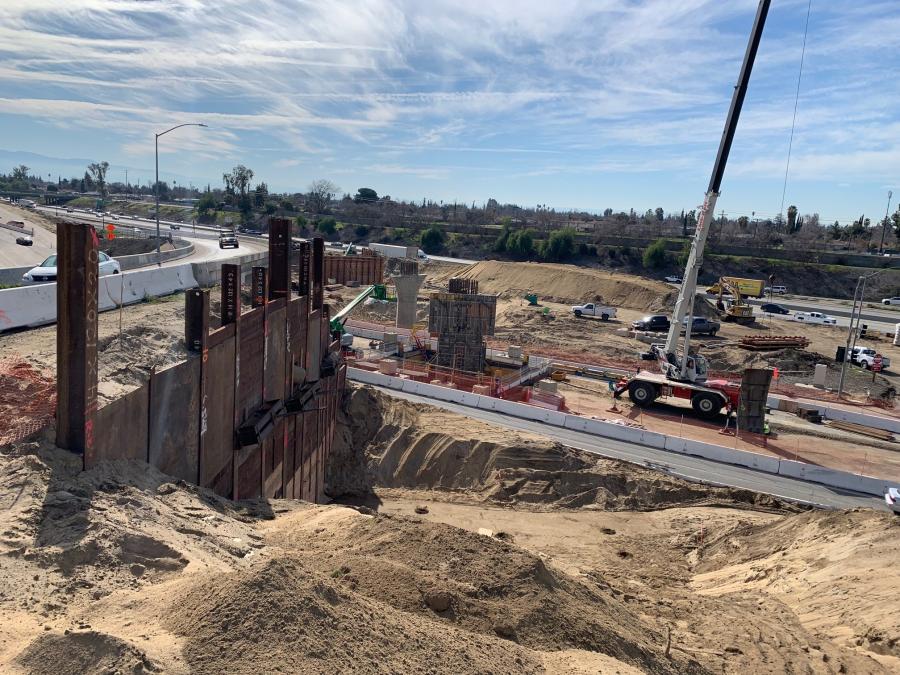 This creative fix required nine months to complete the 3,400-ft. wall and was necessary before new freeway construction could begin. "When problems like this surfaced, the team held to a mindset of trying to find the best solutions," said Bassett. "When we saw problems, we tried to bring them up early and work as a team to get them fixed."

During excavation, the team also discovered other surprises including such things as 30-ft.-long chunks of concrete that were 4-ft. thick. Throughout the project, Granite emphasized steps that were good for the environment. This surprise was no exception. Workers simply fed the concrete chunks to a crusher located onsite that crushed concrete from the demolished bridges and used as aggregate base for the new asphalt and concrete roadways for both SR 58 and 99.

With most of the big problems out of the way, the workers could focus their energies on the two bridges that were the heart of the project. The connector bridge for the two freeways had to be built in a new location. The three-span bridge required a new height to accommodate modern traffic conditions and a new location to accommodate the interchange. The overhead clearance reached 18 to 19 ft. Granite's team recognized that this part of the project had fewer overlapping issues and decided to start this portion of the project earlier than required, shaving months off the schedule.

Planned relocation of utilities often conflicted with construction. This can be a serious problem when the utility lines are located where bridge abutments are needed. Relocation of storm drains was another challenge. One of the solutions was that the construction team built the bridge abutment but initially left out the wing walls. This enabled the utility lines to be temporarily rerouted with the wing walls installed later when the final lines were laid. Also, AT&T relocated some of its fiber optics overhead to prevent interference with construction.

With many of the problem issues out of the way, Granite workers could address paving, the bread and butter of many Granite projects. Prior to the interchange work, SR 58 ended at SR 99, forcing motorists to travel on surface streets to reach I-5, a major connection for north-south traffic for the West Coast. The completed roadwork will enable commuters and truckers a smoother, quicker traffic flow on the new Centennial Corridor and Westside Parkway. These are vital transportation corridors. 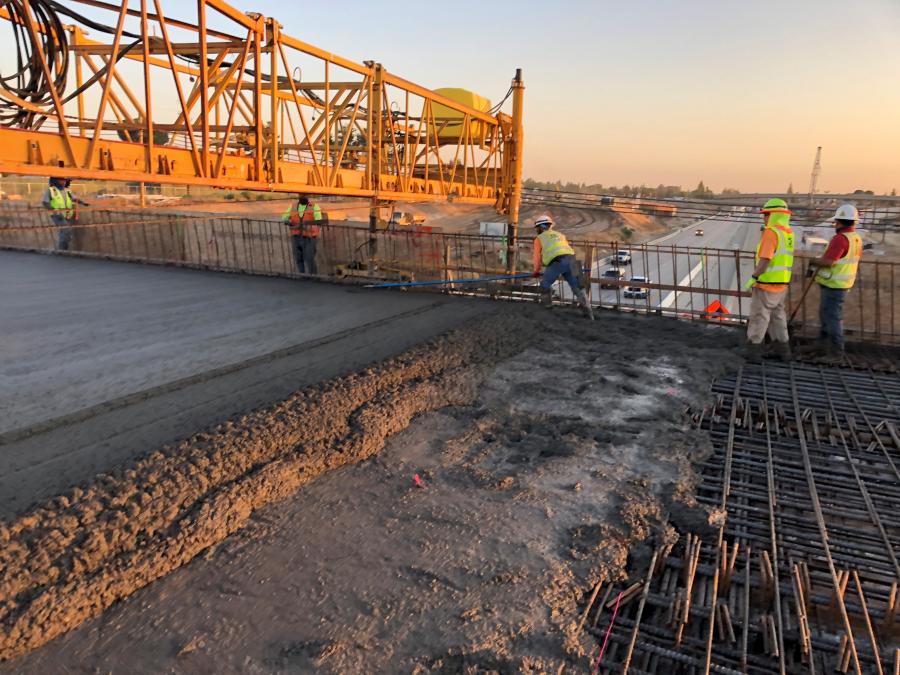 "Each architectural form set was 100 feet long with 19 different sections needing to be installed to complete the face," said Bassett. "This involved a lot of repetitive motions and we tried to think if there was a better way to do it," said Bassett. One simple solution was to convert equipment like drills, skill saws, nail guns and caulking guns to battery power. This meant fewer power lines and less chance of workers getting tangled up with each other. Also, the lighter equipment meant workers could install more elements faster. It greatly improved our productivity."

As the job concluded, a new normal emerged in this central California city. "It was gratifying to see the project completed and see the bridge open again," said Bassett.

"The bridges carry lots of local traffic, pedestrians, school children and local business activity. We were able to listen openly about problems and worked with the city to find solutions."

Darryl Ebel, Granite's area manager, was pleased by the safety record on this complicated project. "We emphasized safety among our team and the different partners. It required two and a half years to complete the job, some 115,000 man-hours. We were able to accomplish this with no lost-time injuries or environmental citations." CEG